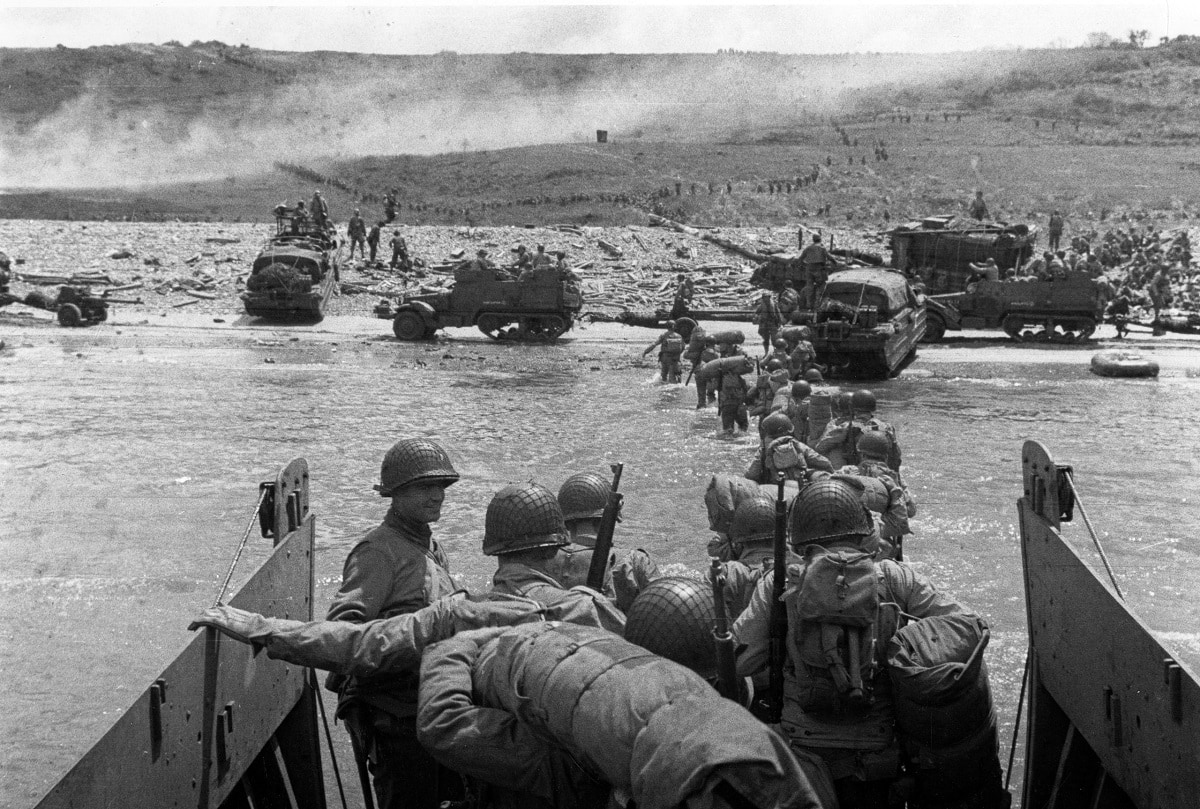 Troops wade ashore from a LCVP landing craft, off Omaha Beach, 6 June 1944. Note DUKWs and half-tracks at the water line, lines of men headed inland, and M1903 and M1 rifles carried by some of the troops leaving the landing craft. Photograph from the Army Signal Corps Collection in the U.S. National Archives.

And there were nastier traps half-submerged in the water: 250 huge steel “Belgian Gate” barricades wrapped with remotely-detonated explosives, over 11,000 long wooden beams tipped with disc-shaped anti-tank Tellermines positioned to explosively gut any boats that bumped into them, and even fixed flame-throwers concealed to douse approaching ships in plumes of fiery petroleum.

The submerged obstacles had to go quickly—which meant someone would have to clear them under enemy fire. That job fell to the World War II ancestors of the Navy SEALs.

Exactly a year before the fateful landing at Normandy on June 6, 1943—the Navy established the Naval Combat Demolition Unit training school at Fort Pierce, Florida, drawing personnel from the “Seabee” construction corps and Bomb and Mine Disposal School.

The school was led by Lt. Commander Draper Kauffman, who had prior served as a volunteer ambulance driver in France and then as a Royal Navy volunteer trained as an expert bomb disposal specialists during German “blitz” over London.

By 1943 it was growing increasingly clear Allied forces in the Pacific and Europe were going to be involved in a lot of amphibious landings—and that if there weren’t experts available to rapidly clear beach obstacles, U.S. troops could end up pinned down indefinitely on the water’s edge.

Kauffman instituted a brutal training regimen culminating in a “Hell Week” of almost non-stop intense physical exertion with just a couple hours of daily rest—a tradition retained to this day in modern Navy SEAL training. Only 30 percent of the volunteers made it through.

Later that December, following a bloodbath at landing in Tarawa due to failure to spot a coral reef in the path of a landing force, the Navy also formed a corps of elite divers called Underwater Demolitions Teams, which would see action in the last nine months of World War II.

But the NCDUs weren’t frogmen: they were meant to hop into shallow water from inflatable rubber boats with an outboard motor manufactured by the Goodyear Tire company (picture here) designated Landing Craft Rubber, Small (LCRS) in the Navy’s Hemingway style.

After three months of training, the NCDUs were organized into six-man teams each led by an officer and a non-commissioned petty officer, and by November 1943 the first of thirty-four teams had deployed to England in anticipation of Operation Overlord.

There, each NDU integrated three additional seamen for support roles, and five-man teams of Army combat engineers to form what were term “Gap Assault Teams.” These spent months testing different methods for cleanly destroying beach obstacles without creating too much shrapnel or obstructing debris.

However, according to a report submitted by Lt. H.L. Blackwell after D-Days, preparations were hampered by a lack of overall commanding officer supervising NCDU teams, possibly resulting in a failure to receive critical requested supplies such as Dunlop Swimsuits.

Instead, the NCDUs improvised. One Lt. Hangensen devised a flexible new explosive by stuffing 2.5-pounds of explosive tetryl compound into rubber tubes that could be wrapped around the joints of obstacles.

These “Hagensen packs” were mass-produced as the NCDU’s preferred tool for surgically dismantling obstacles and even teller mines. For example, two Hagensen packs placed to each side of their gusset plates of a steel hedgehogs knock it apart

Sixteen NCDU teams were assembled for the landing at Omaha beach. The plan was for the teams to arrive with the second landing wave after 6:30, and each blow up a fifty-meter wide gap through the seaward-facing obstacles while Army engineers focused on the landward obstacles. The teams were each covered by three-vehicle Sherman tank units, including one tank with a dozer blade.

But things didn’t work out according to plan. Many accidentally went alongside—or even ahead of —the first wave. Due to haze, shore currents and lack of pilot craft, all landed between a mile and a half-mile to the left of their intended landing zones.

They were met by withering machine gun and shell fire from the troops of the German 352nd Infantry Division. Three NCDU teams were completely wiped out.

NCDU 141 was cut down by machine-gun fire on the ramp of their LCM landing craft as they struggled to heave their rubber boat into the water.

Another team managed to get in the water and begin placing explosives when they were all killed or wounded by a mortar bombardment.

NCDU 23 also began placing explosives on the beach obstacles when a shot detonated charges still on their rubber boat, setting off an explosive chain reaction.

“A freak accident caused the failure of another naval group; the officer was about to pull the twin friction-igniters when a bit of shrapnel cut the two fuses and his finger as well. The enemy saved one naval team the trouble of pulling its igniters, when a bullet or fragment managed somehow to set off the prima cord and all the charges!”

They were followed by support teams with marker poles and buoys so that follow-on landing craft knew where it was safe to land. But many of the buoys were riddled by shrapnel, and the remainder proved too confusing for landing craft commanders to be of much help.

Still, by noon, the four other surviving teams finally made progress, resulting in thirteen complete gaps. By then, the NCDU members had been continuously working their sideways demolishing obstacles, so that the gaps now averaged 64 meters wide.

Even as machinegun and rifle fire rent the air around them NCDU specialists actually scaled up ten or twelve feet up wooden pilings tipped with Teller mines to place charges on them, often piled on each other’s shoulders.

Several NCDUs landed far to the left of their intended FOX RED beach landing zone—but their efforts there blasted a path through which Allied tanks penetrated inland to capture Cabourg and Coleville.

Over the next two days, the NCDUs and Army combat engineers removed 85 percent of the obstacles on Omaha beach. But they paid a staggering price: of the 175 Navy seamen and officers in the sixteen NCDUs, thirty-one were killed and sixty wounded—a 52 percent casualty rate. This article, for example, describes the harrowing experience o NCDU 145 which suffered seven casualties out of thirteen personnel.

Meanwhile, at Utah beach, were enemy resistance was light, the NCDUs lost only four killed and eleven wounded to an artillery bombardment.

A clearly shaken a Lt. Blackwell concludes “Experience…bears out the statement that hand-placed charges can be used successfully only if enemy fire has been neutralized.”

He further noted “Under the conditions met by Force “O,” the use of a rubber boat for auxiliary explosives is undesirable. It is easily bullet-holed, it is awkward above the water line, and it forces the men off-loading it from landing craft to gather and stay in one spot, a perfect target.”

He also argued that landing craft could be used to destroy wooden obstacles that weren’t booby-trapped by ramming, and that fielding dozers to NCDU units would expedite clearance operations. However, Blackwell had nothing but praise for the Army engineers and tankers working alongside Navy demolitionists—and advocated tighter integration for future operations.

NCDUs would see additional action in landing in Southern France and the Pacific, where they were increasingly folded into UDT swimmer units. The UDT teams themselves were gradually converted between the 1960s and 1980s into the elite Navy SEAL units of today.