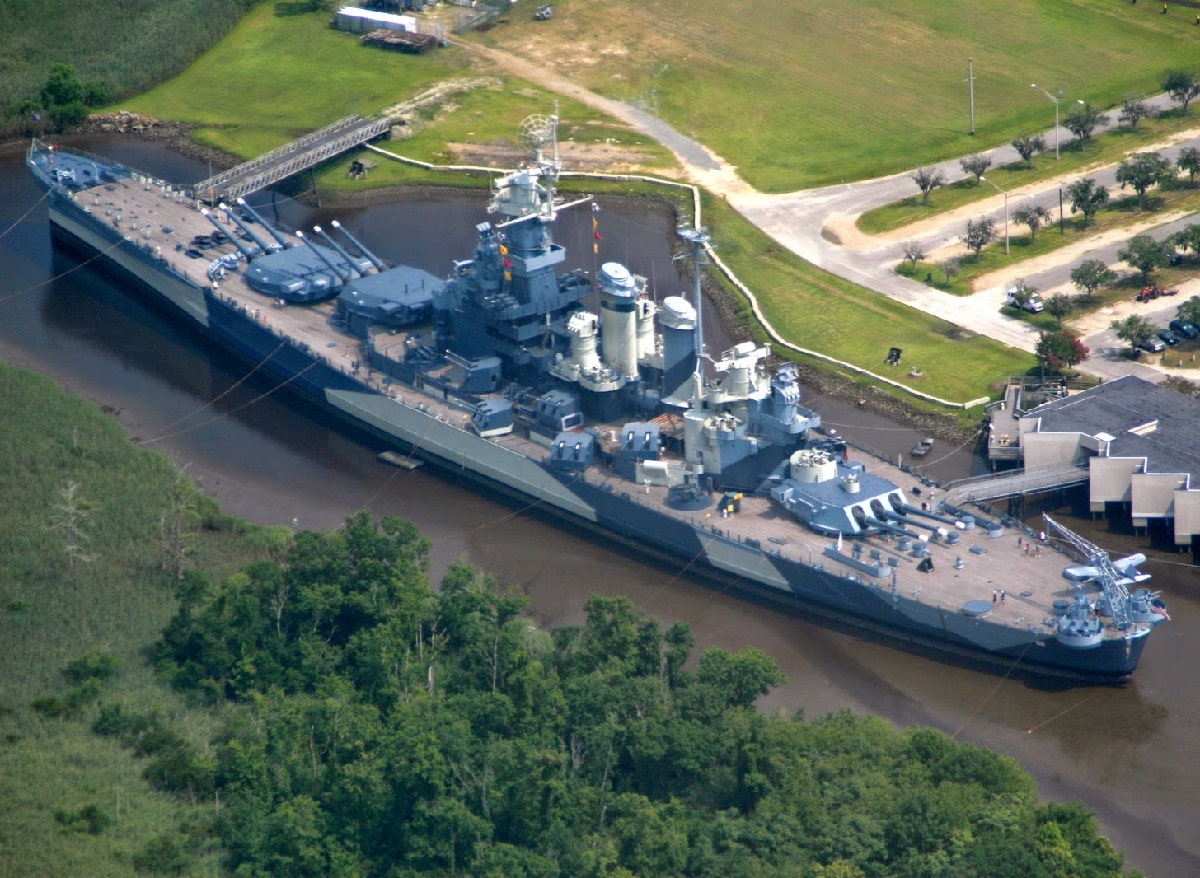 The USS North Carolina-class was part of the U.S. Navy’s pre-World War II efforts to create a new class of “fast battleships,” which were limited under the Washington Naval Treaty in terms of displacement and armament but resulted in a capital ship that could keep up with the faster-moving aircraft carriers.

Due to a clause in the Second London Navy Treaty, the guns of this new class were was increased from the original nine 14-inch guns to nine 16-inch guns. Additionally, the battleships were armed with twenty 5-inch/38 caliber guns in ten twin mounts.

The lead vessel (BB-55) was laid down in 1937, and when she was completed in April 1941 and at the time of her commissioning, she was considered to be among the world’s greatest sea weapons. The warship proved her worth in the Second World War and survived many close calls and near misses, including being hit by a Japanese torpedo. By war’s end, she lost just ten men in action while another sixty-seven had been wounded. Despite that fact, the Japanese claimed six times the battleship had been sunk.

Since April 1962 the warship has served as a floating museum in Wilmington, North Carolina and was declared a National Historic Landmark in November 1982 – in part because the application noted that the ship was in excellent condition and had remained largely in its wartime configuration.

However, in retirement, the majestic warship has had to endure the elements – and that has been a far more vicious enemy.

In 1998 the museum’s operators even launched Operation Ship Shape, a domination drive to secure funds to make repairs. Yet, the damage had been so great that in 2009, the U.S. Navy gave two directives. The ship would either be scrapped or restored. Fortunately, the latter was decided upon, and that resulted in a multi-year Generations Campaign to fund work on the aging vessel. To date, more than $23 million in public and private funds have been raised to save the aging battle wagon.

“It’s the most successful public-private partnership in the history of the Battleship North Carolina,” Capt. Terry Bragg, executive director of the attraction, told Wilmington Biz. “We’ve had other fundraising campaigns, but not of this scale or of this success.”

One factor was that the navy calls for battleships to have significant hull repairs every twenty years, but North Carolina was never dry docked and hasn’t any significant repairs to the hull since 1953. As a result, corrosion was so significant that the hull plating had been reduced from as much as 0.75-inches to just 0.15 inches. As moving the ship would have been too cost-prohibitive, the repairs have been done in place.

This included hiring local firms, including Bowman Murray Hemingway as the architect and Neal Andrew of Andrew Consulting Engineers, to construct a cofferdam – a watertight structure around the battleship – that allowed for the water to be pumped out so that major work could be conducted on the hull in a dry workspace.

“Doing hull repairs on the Battleship North Carolina is no simple task,” added Brag. “There is no other project like the repairs of the battleship in the world.”

It is easy to see why so much effort is being placed on the refurbishment.

“We’re the second most visited tourist site in the state and we know that we generate a lot for Wilmington, and it’s a real partnership, and we’re just thrilled to be a part of the downtown community,” said Michael Zalob, chairman of the Friends of the Battleship North Carolina Board of Directors.

The project is now nearing the conclusion of the second phase to update and preserve the vessel. Next up are plans to construct a living shoreline, install wetlands and improve drainage but also the elevation of the battleship site – dubbed the “Living With Water” initiative.

When this is completed the warship will continue to be a major attraction in North Carolina and as a memorial to those of the Greatest Generation who served on the vessel during World War II.

“The hull repairs, the education, the walkway and the Living with Water will preserve the destiny of the Battleship North Carolina to continue decades into the future as the state’s memorial, as an attraction and a center for education,” added Brag. “I predict in the decades to come, most of the historic ship fleet – of about 175 historic ships around the world – most of them will start to succumb to the challenges of corrosion and deterioration and an inability to raise the capital funds at this level. And that in 100 years, there will be a very small handful of historic ships representing the World War II history of the country that will still survive. One of them will be the Battleship North Carolina.”