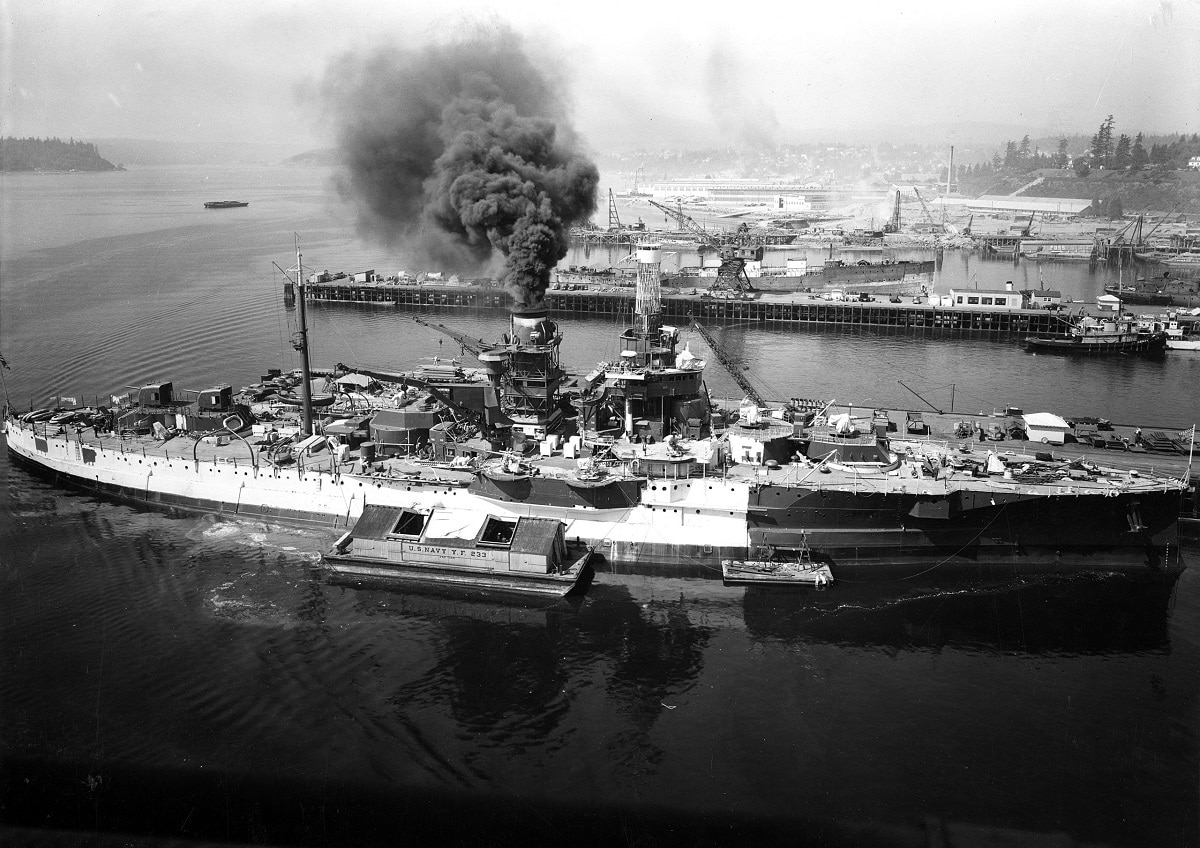 On December 7, 1941, one of the first attacks conducted by Japanese aircraft was launched against the former battleship USS Utah, a radio-controlled target ship. Today, USS Utah remains at the bottom of Pearl Harbor, a memorial to those lost in the surprise attack.

USS Utah (BB-31) was the sixth dreadnought battleship commissioned by the U.S. Navy. Like the preceding Delaware-class, Utah and her sister Florida carried ten 12” gun in five twin, center-line turrets. Displacing 23,000 tons, Utah could make 21 knots on steam turbines. She and her sister were the first U.S. battleships to use turbines, although some later ships would revert to reciprocating engines.

The commissioning of Utah gave the USN a squadron of four modern battleships, behind the British but competitive with the Germans. Michigan and South Carolina, the first U.S. dreadnoughts, were too slow to operate in the line of battle. The USN took pains to avoid the interoperability problems that plagued its British, German, and Japanese counterparts. Between 1910 and 1921, the battleships were all relatively heavily armed, armored, and consistent in speed. It was not difficult, therefore, for the fleet to operate as a unit. In contrast, the Royal Navy included battlecruisers—which, while useful for many operations, could not operate safely in the battle line. Also, the dreadnoughts of the Royal Navy varied widely in speed; this could be a handicap in battle, as faster ships could get separated from slower. The Kaiserliche Marine and the Imperial Japanese Navy suffered from similar issues.

Utah, like many U.S. ships of the period, engaged in her first combat action off Veracruz in April 1914. During the chaos that attended the Mexican Revolution, President Woodrow Wilson determined that the seizure of Veracruz would be of use in assuring U.S. influence, while at the same time reducing German influence. A contingent of sailors and marines were supported by offshore gunnery, and the men of the Utah apparently distinguished themselves. The United States remained in control of Veracruz until November.

In 1917, the United States declared war on Germany, and the U.S. Navy responded rapidly. Utah was not included in the battle squadron allocated to the Grand Fleet in 1917, but did arrive in 1918, operating as a convoy escort. In September, she became the flagship of the Sixth Battle Squadron. Later, she would ferry President Wilson to France to participate in the negotiations that led to the Treaty of Versailles. She remained active in the years after the war, serving as flagship of U.S. warships in Europe until 1922.

Her services remained in demand during the interwar period. In 1924, she hosted General John Pershing on a goodwill tour of South America. In 1925, she went into modernization, receiving refurbished oil-fired boilers, losing her aft cage mast, getting a suite of anti-aircraft guns, and an aircraft catapult. In 1928, she took a second cruise to South America, hosting President-elect Herbert Hoover. The rest of her duties mostly involved training and exercises.

Utah had survived the 1922 Washington Naval Treaty, which had pared the U.S. Navy down to eighteen battleships, and precluded the construction of replacements. The 1930 London Naval Treaty moved a step beyond the 1922 treaty, however, reducing the number of battleships in each fleet. The new limit for the United States and the United Kingdom was fifteen, as opposed to nine for Japan. This necessitated the elimination of several units from each fleet. Utah found herself on the chopping block. However, the treaty provided for the disarmament of several ships for training and experimental purposes.

Utah took on this role, heading back to the shipyard in July 1931. She lost her entire armament, although the turrets remained, and gained relatively sophisticated radio control equipment. This equipment allowed operators to modify her course and speed, which allowed for realistic training by gunners in other battleships. In a sense, Utah became a target drone, although a small crew would remain safely in the armored portions of the ship as the shells rained down. Utah returned to service in 1932, and acted as a target ship, mostly in the Pacific, until 1941. She also served as a platform for various experimental guns, especially anti-aircraft artillery.

On December 7, 1941, Utah was moored off Ford Island, some distance to the northwest of Battleship Row. The flight commander of a group of Japanese torpedo bombers recognized Utah’s demilitarized condition, and instructed his pilots to attack other targets. Nevertheless, six torpedo bombers initiated runs on Utah, hitting her with two torpedoes at around 8 a.m. Eleven minutes later, Utah rolled over and sank. Remarkably, only fifty-eight of a crew of 471 died, with four sailors being rescued after their blowtorch-armed comrades cut through the bottom of the hull.

Efforts to salvage the wreck of USS Utah failed. Her service in the war lasted about fifteen minutes, but she nevertheless earned a battle star. The service was hardly irrelevant, as the torpedo that hit Utah might have hit another US warships, resulting in the deaths of more sailors. Today she remains at the bottom of Pearl Harbor, although her memorial is visited far less frequently than that of USS Arizona.

Utah was the oldest battleship to serve in World War II, but not the oldest to serve as a battleship, an honor which goes to USS Arkansas. Her presence at Pearl Harbor is often forgotten because she had ceased to serve as a battleship at the time of the attack. However, her contribution to the preparedness of the Pacific Fleet was every bit as important as that of the other battleships of the line, and her sacrifice should be noted. Several relics of the ship adorn important government buildings in the state of Utah.