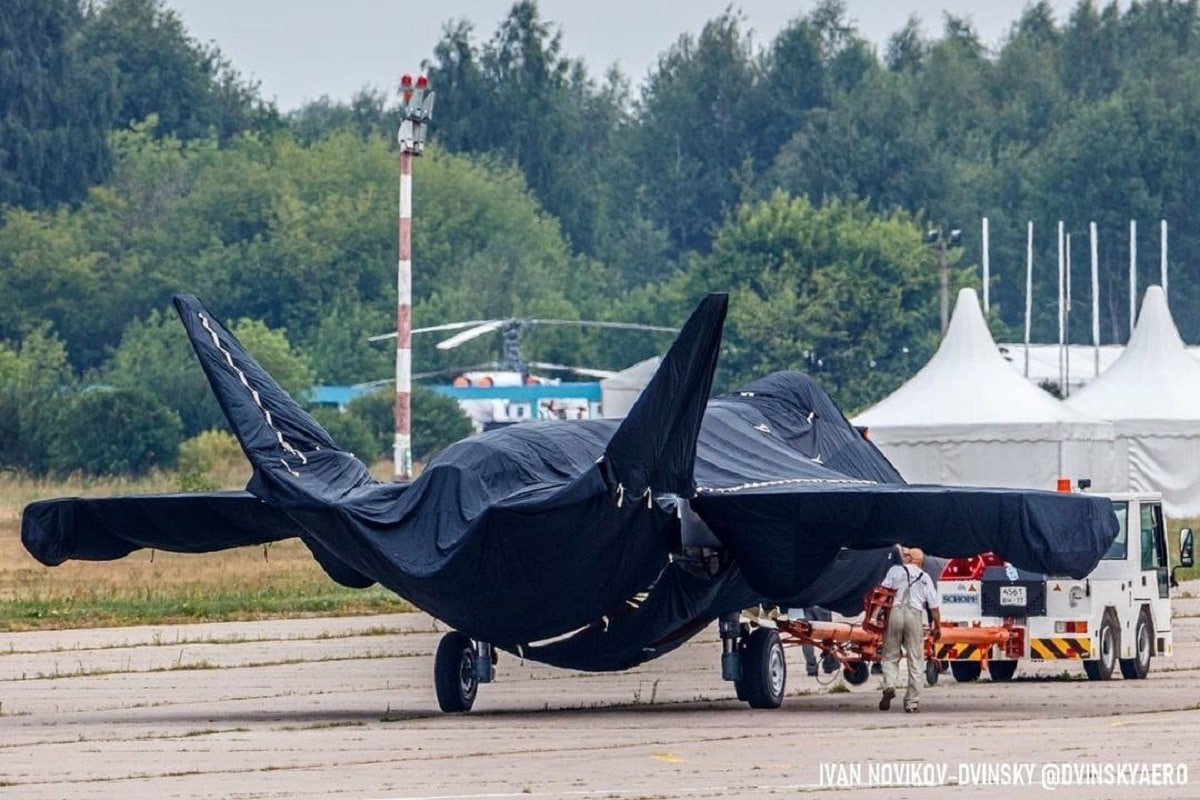 Photos recently posted to social media shed a bit of light on Russia’s newest stealth fighter. The photos, uploaded to Vkontakte a Russian platform analogous to Facebook, showed the fighter covered in a black cloth or tarp-like material towed by a ground crew ahead of the MAKS International Aviation and Space Show.

Although the black protective covering hid specifics details about the airframe, the tight-fitting material revealed several features about the aircraft. First, the fighter does appear to have an overall stealthy airframe shape, including a nose chine that seems to continue through the jet’s air intakes and into the wing roots. The airframe’s twin tails are canted outwards, a feature favored by a number of stealthy aircraft including the United States’ F-22 and F-35.

Taken from ground level, the photos, unfortunately, do not reveal much about the airplane’s wings which are shown almost completely horizontally.

However, there is a strong possibility that the airplane is a single-engine design. A view of the covered airframe’s rear aspect shows the covering material draped over a single, possibly unserrated and therefore decidedly unstealthy exhaust nozzle. Unless this new airplane features vertically stacked engines (a seldom-seen choice), the rather mysterious airframe is a single engine design.

Interestingly, the airplane features a twin-wheel nose gear. While not exclusively a feature of carrier-capable airplanes, dual nose wheels aid in withstanding the increased stress airframes experience during carrier landings. While the Russian Navy does operate carrier-based fighters Russia’s single Soviet-era aircraft carrier, the Admiral Kuznetsov, is widely considered unreliable at best and combat-ineffective at worst.

United Aircraft Corporation, the majority Russian government-owned airplane manufacturing conglomerate, released an odd teaser of the new fighter earlier this week on Twitter along with a trailer. These combined with other promotional material suggest that the name of the new stealthy fighter could be “Checkmate” and that the fighter’s logo associated with a black knight chess piece.

The trailer UAC released saw pilots from the UAE, India, Vietnam, and Argentina come together at the end of the video and suggests the new fighter could be intended for the export market rather than as an exclusively Russian platform. This would be a logical market choice for the fighter, considering Russia’s previous stealth fighter production difficulties.

It’s All About the Money

Perhaps one of the most significant challenges to previous Russian stealth fighters came not from an engineering standpoint but from a financial perspective. Russia’s other domestically vaunted but underproduced stealth fighter, the Sukhoi Su-57 has thus far been produced in only very small numbers, partly due to Russian budgetary limitations.

One of the consequences of budgetary constraints to the Su-57 platform besides low production numbers has been a forward-focused application of stealth characteristics, optimized for dissipating and defeating enemy radar from the front, but with a significantly less stealthy rear aspect. This may be the case with the Checkmate as well.

One way to partly or fully offset production costs would be by offering a single-engine, lightweight, and therefore affordable stealth fighter for sale on the international market. Will this be the case for the so-called Checkmate fighter? It is too early to say, though there is certainly an argument to be made in favor of a new Russian stealth fighter available for export.