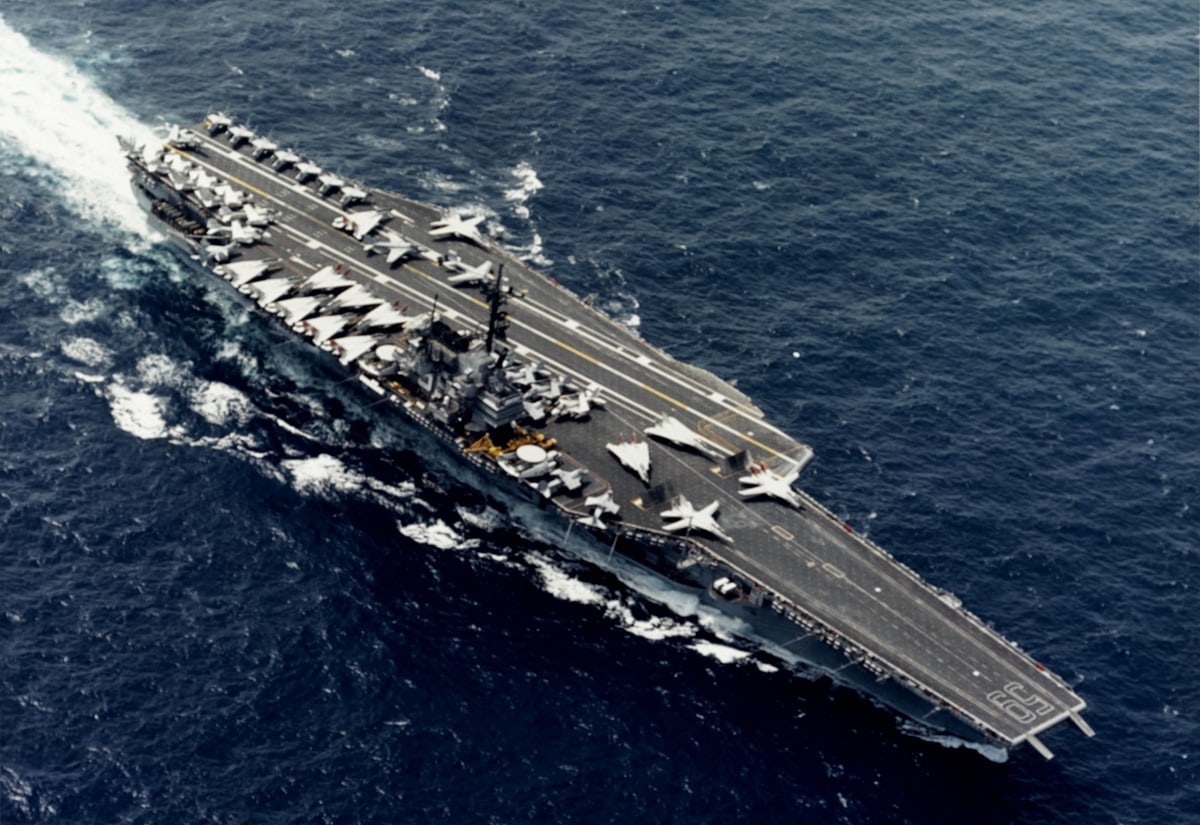 USS Forrestal (CV-59) was the world’s first supercarrier. Rivaled only by the converted battleship HIJMS Shinano and the canceled USS United States (CVA-58), Forrestal established a new template for maritime air power. Serving for 38 years, Forrestal provided the model upon which the United States would build its fleet of modern aircraft carriers, all the way down to USS Gerald R. Ford (CV-78).

But what if USS Forrestal had never existed? What if the Department of Defense under President Dwight Eisenhower had decided to go in a different direction?

The nadir of U.S. interservice conflict came in 1949, with the Revolt of the Admirals. The newborn U.S. Air Force and the U..S Navy were in competition for procurement funding, with the Air Force in favor of the Convair B-36 “Peacemaker” strategic bomber, and the Navy supporting a new class of large aircraft carriers, led by the USS United States. Foreseeing victory for the Air Force, a group of admirals began aggressively denouncing the B-36 and disparaging civilian procurement authority. In the end, several admirals were fired and the new carrier was cancelled.

A little more than a year after the end of the USS United States, North Korea invaded South Korea, initiating a new stage in the Korean War. The Navy rapidly responded with its existed carrier fleet, including primarily Essex class ships leftover from World War II. Experience during the war demonstrated not only that the carriers offered the Navy a rapid reaction role, but also that Marine and Navy pilots consistently performed close air support and attack missions more effectively than their Air Force brethren. The Air Force, with its heavy emphasis on strategic bombing, had neglected attack missions, and indeed most aspects of limited warfighting. Consequently, the Navy had a new argument for big carriers, which could operate powerful aircraft at high sortie rates. USS Forrestal (CV-59), larger even than the USS United States, soon resulted.

But the construction of the Forrestals had not resolved the argument. Air Force General Curtis Lemay continued to content that aircraft carriers, even ships as large and formidable as USS Forrestal, could not compete effectively with land-based aircraft. Based on his experience from World War II, Lemay had little interest or faith in airpower that could not conduct a strategic nuclear campaign against the Soviet Union.  Although Forrestal class carriers could carry out nuclear attacks, they would likely not be in position to do so at the beginning of the war, unlike the B-52 Stratofortress. Lemay’s arguments were particularly compelling given the President’s interest in massive retaliation as the cornerstone of US policy to deter the Soviet Union.  At one point, the President mused “What in the world are we building Forrestal-type carriers for?” in response to Lemay’s arguments.

But the Navy argued that not only could carriers deliver more expeditionary capability than the Air Force; they could also deliver nuclear weapons, and indeed that they would get better at delivering them in the future. The A-3 Skywarrior, a jet bomber designed to deliver nuclear weapons to Soviet targets, entered service in 1956. The Skywarrior significantly increased the speed and survivability of the Navy’s nuclear strike force, and although it could operate from modernized Essex and Midway class carriers, it benefitted hugely from the Forrestal’s flight deck.

Moreover, on the way was the A-5 Vigilante, a supersonic, carrier-based strategic bomber that would presumably offer a more rapid, more survivable way of hitting Soviet targets. A large, complex aircraft, the A-5 required the big decks of the Forrestal, and thus gave the supercarrier a competitive advantage against its smaller kin. For all these reasons, the Truman and Eisenhower administrations determined to go ahead with the construction of a class of supercarriers, the first of which would takes its name from the late James V. Forrestal, first Secretary of Defense.  During the building process, the U.S. Navy determined that an angled flight deck would improve sortie rate.  Consequently, Forrestal (and her sister, Saratoga) were redesigned mid-construction to with angled decks.

The pursuit of the supercarrier was hardly unanimous within or without the US Navy. Even some admirals believed that the carrier tied up too much combat power in a single, vulnerable platform. Nuclear attack submarines soon commanded the anti-ship role that carriers had dominated in World War II. Long-range patrol aircraft such as the P-3 Orion could conduct both anti-submarine and anti-surface attacks, and the Navy could have done even better if it had borrowed a page from the Soviet Navy and navalized the B-52.  The George Washington class nuclear ballistic missile submarines would soon offer the Navy a much more effective platform for delivering nuclear weapons.  Indeed, the A-5 Vigilante did not last long as a nuclear bomber, eventually shifting over to a recon role.

Moreover, the Essex and Midway class ships continued to provide a capable carrier fleet until the 1970s. Many of the ships could have lasted even longer if supercarriers had not replaced their capabilities. The US Navy would have long retained its naval aviation dominance even in the absence of the supercarrier. The Soviet Union only built the equivalent of light carriers until the late 1980s, none of which could boast an air group more impressive than a legacy Essex.

Replacements for the Essex class carriers might have looked more like the Sea Control Ship than the modern supercarrier. Similarly, the big flat-decked amphibious assault carrier might have taken on greater prominence even earlier, fulfilling the need for expeditionary warfare capabilities without the expense of high speed and a large, angled-deck. To be sure, the absence of the supercarrier would have changed the Navy in dramatic ways.  Certain aircraft, such as the F-14 Tomcat and the A-5, would never have flown in significant numbers were it not for the Forrestal.

The U.S. Navy would have looked profoundly different in the absence of the USS Forrestal and her kin. The supercarrier rapidly became the world’s most visible form of power, offering the United States a tool for political, diplomatic, and military engagement almost anywhere in the world. The Soviet Union became obsessive about defeating the carriers, an obsession that has carried over to the People’s Republic of China. Specific deployments, such as that of USS Nimitz and USS Independence in the Taiwan Straits Crisis of 1996, or of USS Enterprise into the Bay of Bengal in 1971, remain memorable diplomatic touchstones that the US Navy probably could not have created in any other way.