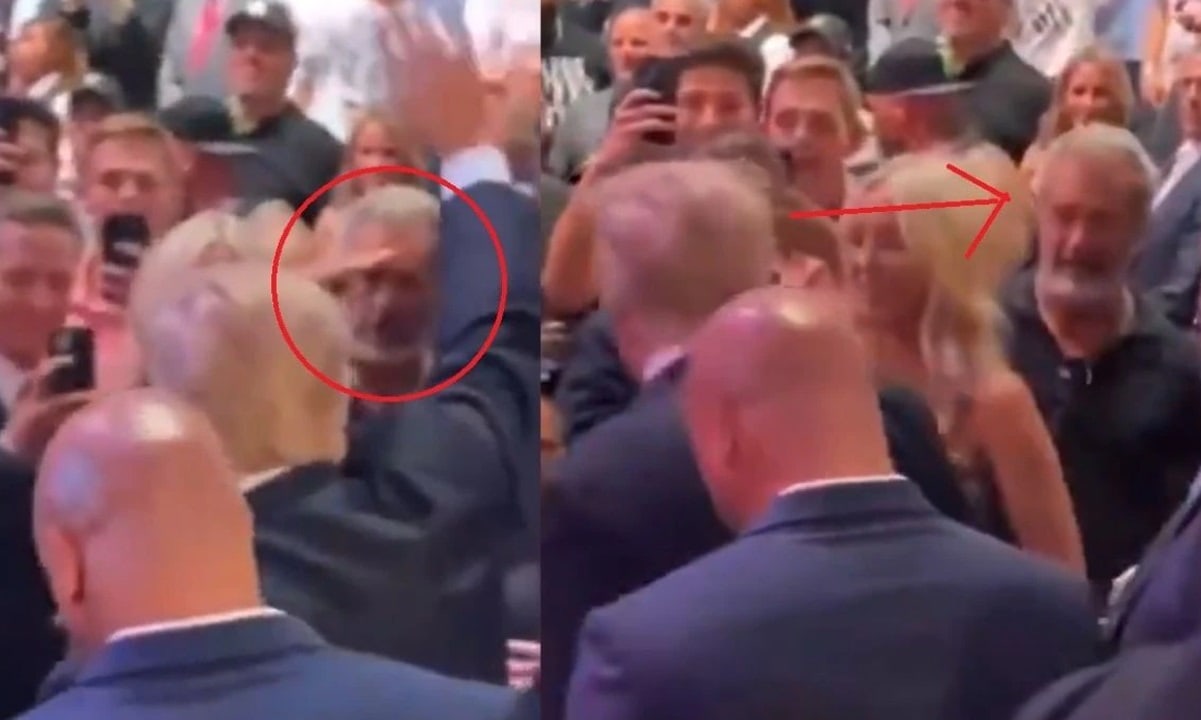 “Disgraced actor Mel Gibson salutes ex-President Donald Trump at a UFC event” is one of those headlines that would have looked really, really weird ten years ago. Yet here we are….

Just that happened over the weekend when the former president appeared at UFC 264 in Las Vegas, and Gibson, who was also in attendance, could be spotted appearing to give Trump a military-style salute.

Snopes confirmed that it was in fact Gibson in the video.

Gibson, independently of his various scandals, has long been known to lean politically conservative, although whether he was specifically a supporter of Trump’s during his presidency is harder to pin down. Gibson said in an interview with Fusion’s Jorge Ramos shortly before the 2016 election that he did not plan to vote in that year’s presidential election, because he wasn’t a fan of Hillary Clinton or Donald Trump.

“The bad news is that one of the people will be elected,” Gibson said.

Gibson, in that interview, even denounced “talk of building walls,” which was of course a big part of what Trump pushed in 2016. He also noted that U.S. service members “often have names like Ramirez and Hernandez and Rodriguez” and that “some of them don’t even get their citizenship until after they’re dead.”

However, there have been various attempts to tie Gibson’s return from scandal to the rise of Trump. Fast Company, in early 2017, asked whether the arrival of Trump might “pave the way” for a Gibson comeback. Buzzfeed, that same month, described Gibson as “the definitive Oscar Nominee For Trump’s America,” after his movie “Hacksaw Ridge” was nominated for six Academy Awards, including Best Picture and Best Director.

Also in early 2017, many made note of unimpressed facial impressions by Gibson and Vince Vaughn, with whom he has worked on multiple films, while Meryl Streep delivered a speech critical of Trump at the Golden Globe Awards. So it’s possible that Gibson is more fond of Trump than he was a few years ago–or that he was merely giving a salute out of respect for him as an ex-president.

When Gibson saluted Trump, those who aren’t fans of either man were critical.

“The crazy thing is, you didn’t even need to know why Mel Gibson was trending to know that he probably did something shitty,” the Twitter user known as Brooklyn Dad Defiant wrote Tuesday. “Rest in hell to his dead career.”

But one thing that many forget is that yes, Gibson’s scandals—including a DUI stop in which he made sexist and anti-Semitic slurs and later abusive comments directed at a girlfriend — pretty much ended his career as a mainstream Hollywood leading man. But they also both happened quite a long time ago, and Gibson has been back in movies for quite a few years.

His comeback vehicle, The Beaver, came out ten years ago. He’s since appeared in multiple films each year, including Machete Kills in 2013, and Blood Father and the multiple Oscar-nominated Hacksaw Ridge in 2016. He ever appeared in the mainstream Hollywood movie Daddy’s Home 2 in 2017, followed by Dragged Across Concrete a couple of years later. Last year he was in Fatman, in which he played a surprisingly violent Santa Claus.

Gibson may be one of those people in which every time he comes back, it feels like he’s been gone for a long time. But his many returns also put the lie to various tropes about cancel culture, as well as the supposed unemployability of conservatives in Hollywood.