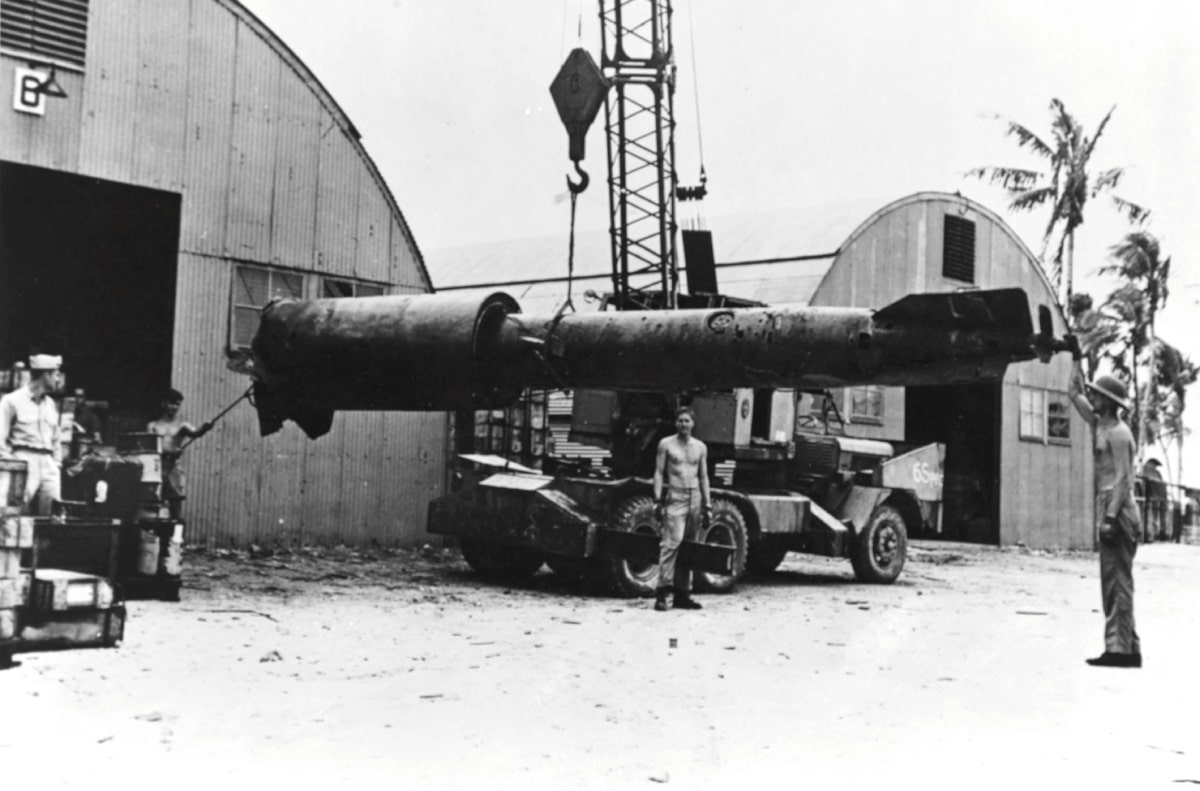 By 1944, Japan was facing defeat in Pacific War. It had lost the technological edge it possessed over U.S. ships and aircraft in 1941 and 42, and a great portion of its veteran pilots and seamen had perished in the Battles of Midway and the Solomon Islands. Unable to train quality replacement crews for its outgunned forces, the Japanese military began forming shimbu-tai (special attack units) to launch suicide attacks on Allied ships. While the kamikaze attacks made by Japanese pilots were by far the most famous and destructive of the initiatives, there were also programs for suicide divers, antitank specialists, motorboat units, midget submarines and manned torpedoes.

Manned torpedoes were not a new concept. England, Italy and Germany all fielded small one- or two-person “rideable torpedoes” in World War II for sabotage operations, but they were not intended to be suicidal. Japan, for its part, had deployed Type A midget submarines in the attacks on Pearl Harbor and Sydney, Australia. These lacked the endurance to make it back to safety, but the crew was intended to escape—in theory. However, there was no pretense about the pilot surviving in the Japanese Kaiten torpedo, a name that translates evocatively as “Return to Heaven.”

Development of the Kaiten began in February 1944, and the first Type 1 prototype was completed in July 25. Testing of the torpedoes began on Otsushima Island, which today hosts the Kaiten Memorial Museum. A production order for one hundred Kaitens followed a week later.

The nine-ton Type 1 was basically a large cylinder with a famous Type 93 “Long Lance” torpedo inserted into the rear serving for propulsion. The forty-eight-foot-long vessel contained pressurized air bottles, ballast and a 3,420-pound warhead in the nose—more than three times the weight of a regular Type 93 warhead. The pilot sat in a canvas chair in the middle with access to a periscope, an electrically powered gyroscope and steering controls.

The Type 1 was difficult to control, and prone to leaking seawater into the pilot and engine compartments when submerged—and leakage into the engines sometimes caused Kaitens to explode when deployed. Although five additional Kaiten prototypes were developed in attempts to improve on the design, only the Type 1 was used operationally.

Of the young men between the ages of seventeen and twenty-eight admitted to the program, fifteen were killed training on the unwieldy vehicles, mostly from collisions with target dummies. Despite being offered positions in conventional military units as well, there were reportedly more applicants than available positions in the Kaiten program.

There are competing explanations for the willingness of thousands of Japanese to serve in suicide units. There is no doubt Kamikaze pilots were accorded great prestige and lauded in the press, and it resonated with elements of the feudal bushido warrior code that remained in high esteem in Japanese culture. Some also argue that the Japanese state adopted the indigenous religion of Shintoism to encourage sacrifice in the service of the Emperor, implying that those who died on behalf of the nation would be favored in the afterlife. Revisionist historians, however, argue that participation in the Special Attack Units may have involved more coercion and pressure than is commonly portrayed. Letters from kamikaze pilots sometimes suggest they believed their sacrifice could help save the home islands from U.S. invasion.

A total of twenty-four submarines, fourteen Matsu-class destroyers and one light cruiser, the Kitakami, were equipped to launch Kaiten torpedoes from their decks. However, only submarine-launched Kaiten were used in combat. Japanese subs could carry two to six Kaiten on their decks, depending on type, but were restricted to submerging no deeper than eighty meters because the Kaiten could not withstand the greater pressure—which may explain why so many subs carrying Kaiten were detected and sunk.

Prior to embarking, Kaiten pilots prepared letters or poetry for their loved ones. When a target was sighted, the Kaiten crew was briefed while their torpedoes were ventilated and their navigational gyroscope programmed. Once the submarine stalked within seven kilometers of its prey, the crew could enter Kaitens through an access tube and the manned torpedoes would power towards the target at speeds as high as thirty-four miles per hour, guided by the gyroscope. Upon closing within a kilometer of the enemy vessel, the pilot would surface the sub and peer through the periscope so as to correct the torpedo’s course—then dive back underwater to avoid defensive fire. If he missed the target, the Kaiten pilot sometimes could make a second pass. He could also manually detonate the charge at a time of his choosing.

There was no means of exiting the Kaiten once sealed inside the later production models, and it is likely some Kaiten pilots that missed their targets self-destructed to avoid a slow death stranded in the ocean. The submarines launching the Kaiten usually remained submerged and often could not directly observe the fate of their charges. They could only wait for the sound of distant explosions transmitted through the water, and assume it indicated a hit.

The submarines I-37 and I-47 set sail on November 20, 1944, deploying Kaitens for the first time into combat around the Ulithi atoll, where American forces were staging for the liberation of the Philippines.

I-47 came across the Cimarron-class fleet oiler USS Mississinewa anchored there, and launched five Kaitens. The first was piloted by one of the Kaiten’s designers, Sekio Nishina, carrying with him the ashes of his colleague Hiroshi Kuroki, who had died in a training accident.

Only one of the five Kaitens struck the oiler—which had filled its tanks with nearly seventeen thousand cubic meters of gas the day before. The resulting blast caused a massive sheet of flame one hundred feet high to rise up in the sky, and the Mississinewa sank, taking with it sixty-three crew out of its complement of 299.

The crew of the submerged I-36 estimated from the explosion that the Kaitens had sunk three aircraft carriers. As a result, Tokyo approved the construction of hundreds more of the manned torpedoes.

As for I-37, it was sunk by the hedgehog antisubmarine mortar of the destroyers Conklin and McCoy Reynolds, along with its Kaitens and all 117 hands aboard.

The second deployment of six Kaiten-equipped submarines in January 1945 proved more typical of what was to come. Several Kaitens failed to work entirely, and one exploded on launch. Kaiten pilot Yutaka Yokota survived the war to write a memoir of his experience, because the Kaitens he was ready to pilot on suicide missions malfunctioned on three separate occasions.

Kaitens did succeeding in hitting three U.S. ships on the second sortie, inflicting eleven casualties in total and sinking a small infantry landing craft. In return, USS Conklin destroyed another submarine and its crew of 122.

Between February and May, six more Kaiten sorties were dispatched to attack Allied ships around Iwo Jima, Okinawa and Guam. Six more Japanese submarines with crews of around a hundred each were sent to the bottom of the ocean, mostly by prowling TBF Avenger torpedo bombers using Mark 24 homing torpedoes. Numerous Kaiten launches had to be aborted because of technical failures, while others were destroyed on the approach by defensive gunfire.

After the war, it was revealed the Japanese navy believed they had sunk between thirty and fifty ships with Kaitens. In reality, Allied records show the Kaitens failed to inflict any damage of note in these five missions.

A force of six submarines departed on the ninth Kaiten mission. The sub I-53 was radioed by a Ki-46 “Dinah” reconnaissance plane the position of a U.S. convoy ferrying troops of the Ninety-Sixth Division from Okinawa to the Philippines for R&R.

I-53’s commander laid a dummy mine in the path of the convoy, which caused the American ships to scatter, then deployed all six of his Kaitens. The Buckley-class destroyer escort USS Underhill—a frigate-sized vessel specialized in antisubmarine warfare—picked up the incoming manned torpedoes on its sonar and launched a pattern of thirteen depth charges, destroying one of the Kaitens. It spotted the periscope of another and rammed it—but in doing so, exposed itself to a third Kaiten which slammed into its hull. Both Kaitens detonated. The Underhill’s boiler exploded, tearing the ship in two, its bow section sinking swiftly into the ocean, taking over half of its crew with it.

Several more Kaitens were launched in the mission, but only two hit and none sank their targets. On July 28, the submarine I-58 did famously torpedo the heavy cruiser USS Indianapolis, leaving two thirds of the more than nine hundred survivors to succumb to exposure and shark attack, an incident famously remembered in the movie Jaws.

I-58’s commander had wisely elected to use regular torpedoes rather than resort to the unreliable Kaiten. He later launched his Kaitens against an escort carrier and a destroyer escort, but two failed to launch and the remainder were destroyed before impacting.

Kaitens sank a total of one destroyer escort, a fleet oiler and an infantry landing craft, causing the deaths of 187 U.S. servicemen. In return, besides the loss of 104 Kaiten pilots in training and operations, 846 submariners were lost on board the eight submarines sunk carrying them. An additional 156 technical staff were killed in action.

The Kaiten was worse than a suicide weapon—it had a lower success rate than regular torpedoes, and its limitations exposed Japanese submarines to detection, causing them to suffer punishing losses. Yet by the time the war ended, the Japanese Navy had invested even more resources into developing new types of Kaiten torpedoes, believing the unconfirmed but optimistic reports of their successes and disregarding the manpower and equipment lost.

A combination of desperation, inaccurate self-evaluation and doomed romanticism fueled the Kaiten program. The Kaiten pilots wished to sacrifice themselves on behalf of their country. But Imperial Japan, like many other countries in the throes of defeat, did not invest its remaining resources in men and material wisely. Millions died in the Pacific War, and consigning patriotic young men to pilot unreliable torpedoes to their certain death was just one addition to that vast waste.