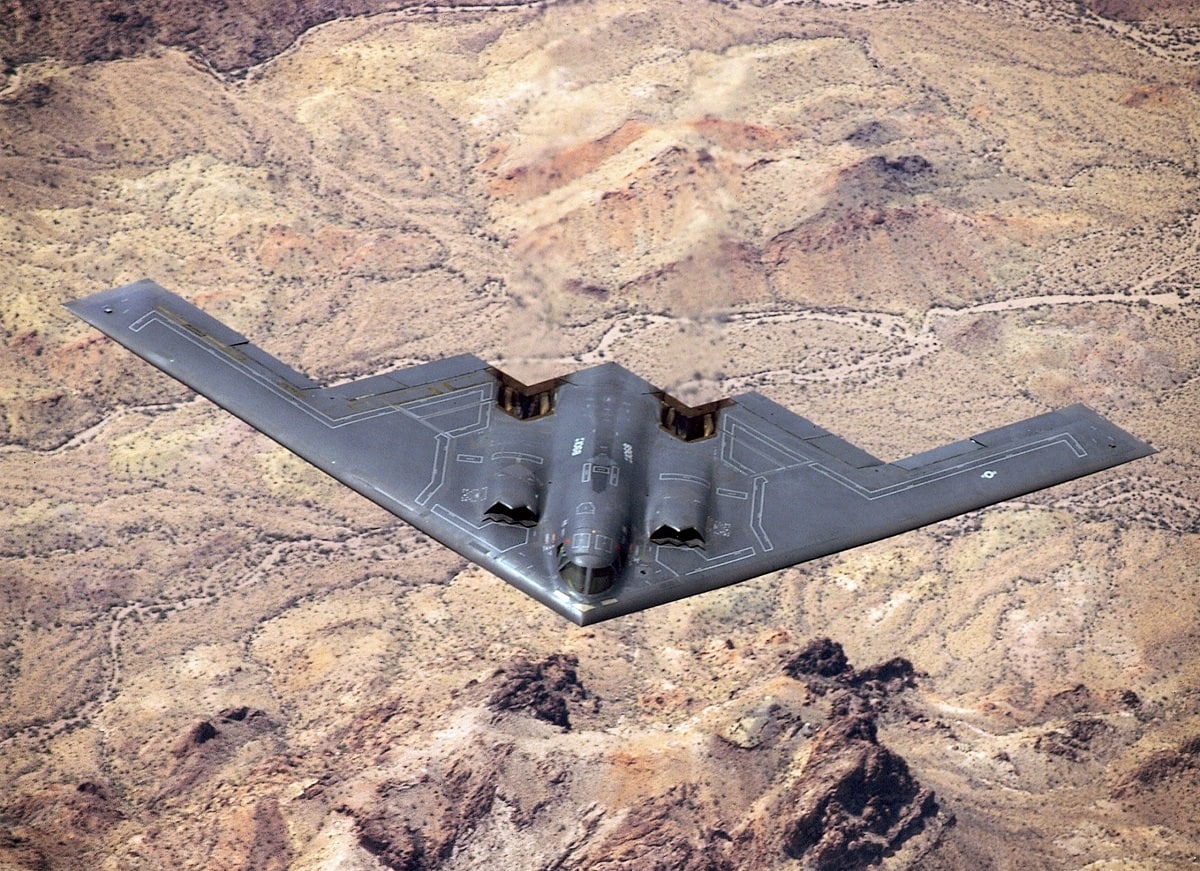 Should you venture out to one of the airshows periodically held near Whiteman Air Force Base in Missouri, you may be so fortunate to spot one of the world’s most otherworldly aircraft, the manta-like B-2 Spirit stealth bomber.

The Spirit’s swept wings measure fifty-two meters across—half the length of a football field—and its cockpit bulges organically from the surface like that of a 1950s-era sci-fi spaceship, contrasting dramatically with the jagged near forty-five-degree angles of its trailing edges.

Why does the B-2 look so weird, and how does that help evade radar?

The Spirit was designed late in the Cold War to slip through the Soviet Union’s formidable integrated air defense network combining ground-based radars, surface-to-air missiles and aerial interceptors and radar planes. These had matured to the point that U.S. efforts to develop faster or higher-flying bombers were proving fruitless.

Radars were the lynchpin of any modern air-defense system, so the Pentagon sought a stealth plane with such a minimal radar-cross section that it could only be detected at very short ranges.

The Air Force’s first stealth aircraft, the F-117 Nighthawk, was a promising start, but it could only carry two bombs over nine hundred miles unrefueled—not far enough to deliver a strategic strike deep inside enemy territory.

In the 1930s and 1940s, aviation engineers had experimented with flying wing designs like the Nazi Germany’s Horten Ho 229, and U.S.  XB-35 and YB-49. Flying wings generate additional lift–and coincidentally, are conducive to low radar cross-sections because their flat surfaces minimize opportunities for radar waves to bounce off them.

However, ‘pure’ flying wings lack tail control surfaces, often leading to fatal aerodynamic instability. The B-2’s design came at a turning point when fly-by-wire controls were entering widespread use. These mediate a pilot’s commands through an electronic interface rather than directly via hydraulics, allowing a computer to compensating for unstable flight characteristics. The Spirit’s quadruple-redundant system, for example, manipulates flaps on the wings and engine thrust differentially to perform turns that most aircraft would rely on tail rudders and elevators to perform.

Jet engines are a common weak point in stealth designs, as they feature radar-conspicuous fan blades and generate hot engine exhaust that lights up infrared sensors. To avoid this vulnerability, the Spirit’s intakes are mounted on the top of the wings and funneled air through S-shaped ducts to four F118 turbofans buried deep inside the plane. This configuration dampens both the B-2’s acoustic and infrared-signature. The Spirit furthermore employs secondary inlets that scoop up cold barrier air surrounding the bomber and mix it with the hot exhaust, which is then expelled over a flattened titanium/carbon-fiber surface to further diffuse the heat signature.

Another key aspect of the B-2’s low-observability are Radar Absorbent Materials. The B-2’s skin is already primarily made up mostly of non-conductive carbon-graphite composite mixed with titanium. The most reflective areas, such as the intakes, flaps and leading edges of the wings, are sprayed with additional Radar Absorbent Material coatings, which have been repeatedly tweaked over the years. Furthermore, the skin is coated with an elastomer (an elastic, rubber-like poylmer) meant to ‘smooth away’ seams, screws, or joints between different materials which might create a chink in its stealthy geometry.

Altogether, these features reduce a B-2’s radar cross section to roughly .1 to .05 meters squared. Though most discrete from the front, the B-2 is designed to remain low-observable from all angles as it is intended to penetrate deep into enemy airspace.

Spirits are camouflaged for daytime as well as night strikes with non-reflective dark-grey paint designed to blend in with the sky at distances of twenty-three miles or greater. The B-2 also sports special bays designed to release chemical to obscure contrails, but these were never used operationally. Instead the Spirit has a LIDAR sensor to detect contrails, giving the pilot a chance to change altitude to eliminate them.

The Spirit is designed to fly across the globe while carrying twenty to thirty tons of weapons—but not to do exceptionally quickly. Its turbofans lacks afterburners, which in any case, would cause infrared and even radar signature to bloom. The Spirit’s top speed is 630 miles per hour, which means it is a bit faster than a Jumbo Jet, while its range of five-to-seven thousand miles is usually multiplied by two to four aerial refuelings using a pop-up hatch behind the cockpit.  This has allowed B-2s to fly non-stop missions lasting nearly two days from Whiteman in Missouri to hit targets across the globe.

A Spirit’s cross-trained crew of two—a mission commander and pilot—enter the plane via a hatch in the belly.   The bomber has room for one crew member to nap (in shifts!), as well as a toilet and space to store food and a microwave.  Though Spirits routinely use GPS navigation, they can get along fine if navigation satellites are knocked out by using a star-oriented inertial navigation system, backed up by a terrain-recognition based system.  Satellite-links and very high frequency radio allow the crew to receive mission updates, such as the cancellation of a planned target.

When a B-2 approaches defended airspace, its enter ‘stealth mode,’ retracting antennas, cutting off certain communication links, and even restricting the use of its flaps. If threatened by long-range radars and missiles over a wide area, it may descend to low altitude to reduce detection range, its Terrain Following System allowing the huge bomber to skim as low as two hundred feet above the ground.

Unlike the earlier Nighthawk, the B-2 is equipped with an APQ-181 Low Probability of Intercept Radar that has been updated to an even stealthier Active Electronically Scanned Array model in 2010. Useful for navigation and scanning ground targets, it can also plot the position of hostile fighters and radars. That data is fed to the bomber’s APR-63 Defensive Measures Suite, allowing the mission commander to adjust the pre-programmed flight path to slip in between areas of densest radar coverage and avoid interceptors.

Arguably, the latter pose the greatest threat to a B-2.  Already, low-bandwidth radars may detect the presence—but not the precise location—of stealth aircraft.  Should a hostile fighter close within a few dozen miles, the Spirit would be vulnerable to visual, infrared and even radar detection.  Lacking self-defense weapons or high speed, a B-2’s odds of survival in that scenario would be pretty low.

For its nuclear strike mission—still its most important role today—the B-2 can carry up to sixteen B-61 or megaton-yield B-83 nuclear gravity bombs on the rotary launchers inside its two bomb bays.  A Spirit’s avionics are hardened versus the electromagnetic pulses generated by nuclear blasts, and the pilots are offered creepy white facemasks to shield their eyes from the flash of detonation.

However, the fall of the Soviet Union prompted the Air Force to hastily adapt the B-2 for conventional weapons delivery. An alternate rack system can accommodate up to eighty Mark 82 500-pound bombs, or an equivalent weight in cluster bombs, mines or larger munitions. In the late 1990s, the B-2 was adapted to carry two-thousand-pound JDAM GPS-guided weapons which are accurate within a twenty-foot radius and have served as its primary weapon ever since.

The B-2 is also certified to carry long-range AGM-154 JSOW glide bombs (80 miles) and AGM-158 JASSM stealth cruise missiles (230 to 575 miles) to allow it to deliver standoff attacks without risking getting too close to increasingly powerful modern air defense radars.

Most exotically, the B-2 is uniquely configured to deploy up to two massive thirty-thousand-pound GBU-57 Massive Ordnance Penetrators, designed to blast apart command bunkers up to sixty-one meters underground—a capability meant to threaten ‘decapitation’ of hostile foreign leaders and destruction subterranean weapons facilities.

The B-2’s ability to deliver such devastating weapons deep within the most well-defended airspace makes it a premium, highly specialized war machine without equivalent—at least unless China’ develops a decent H-20 stealth bomber. So far, B-2s have mostly leveraged their range and payload rather than stealth for actual combat operations. Hopefully, the Spirit’s awesome firepower and low-observable characteristics will never be tested in the kinds of high intensity (and likely nuclear) great-power conflict it was designed to fight.

In this article:Air Force, B-2, B-2 Bomber, B-2 Stealth Bomber, Military, NotHome, US Air Force