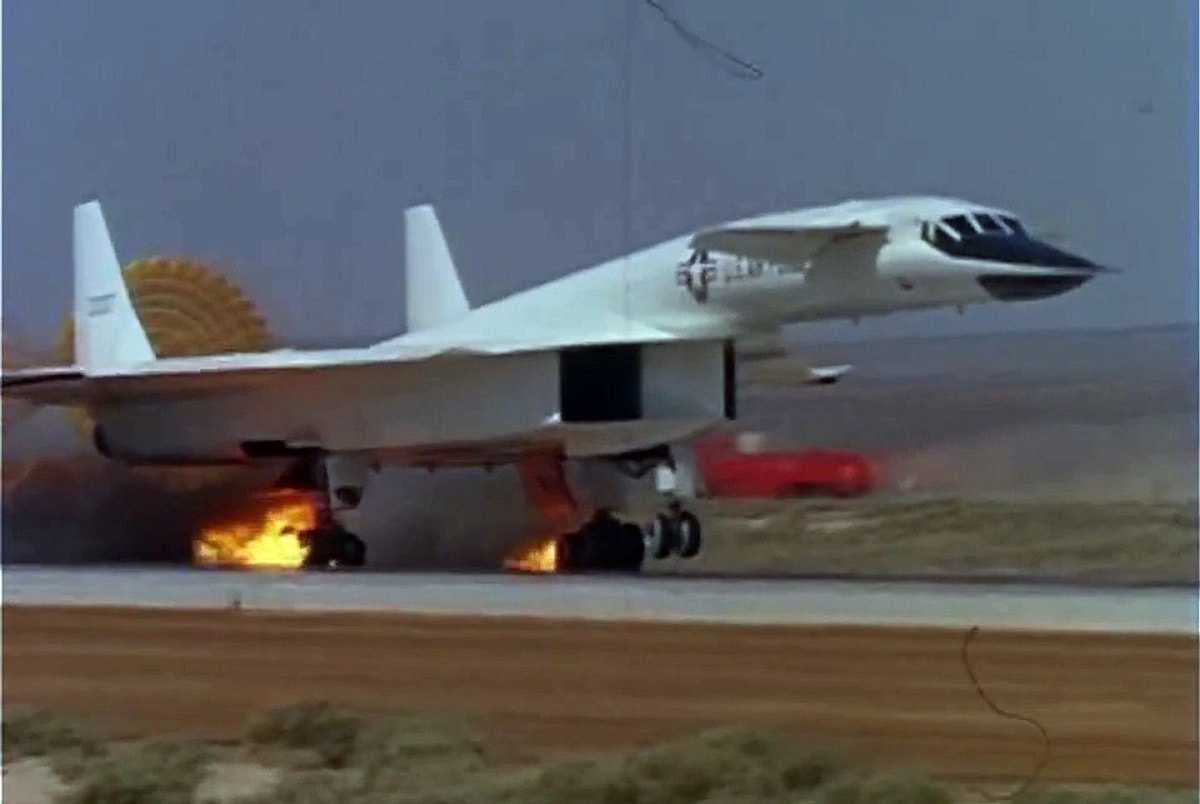 Image: Screenshot from video embedded below.

The North American Aviation XB-70 Valkyrie was one of the first supersonic bombers to be built after the Second World War. Designed and constructed in the mid-1950s, its top speed exceeded Mach 3, enabling it to fly far faster than any possible interceptor aircraft, and at greater height. Unfortunately, as Soviet and American aircraft improved, their missiles kept pace, and in 1961, following the previous year’s shootdown of an American U-2 reconnaissance aircraft, the XB-70 project was shelved. Two prototype aircraft were ultimately built, and used for aerodynamics testing by the Air Force; a third prototype was canceled during construction.

The two remaining aircraft were labeled Air Vehicle 1 and 2 (AV1 and AV2). AV1 made its maiden flight in September 1964; AV2 followed in July 1965, and thereafter, the two aircraft regularly pushed the envelope on speed and altitude records, regularly achieving speeds exceeding Mach 3 and pushing 70,000 feet.

Unfortunately, these extremes meant that the aircraft had their fair share of mechanical and maintenance problems – one of the most terrifying of which was a broken landing gear on AV2 in April 1965. On a flight that day, test pilot Joe Cotton took off in AV2, but the landing gear would not retract all the way into the plane’s gear well. Instead, it collided with the well door and slashed the tires.

In this position, the gear was stuck; it would neither retract into the plane’s gear well nor deploy again for landing. After an attempt to knock it in by brushing against the runway failed, Cotton successfully caused it to fall down by shorting the plane’s circuits using a paper clip. Inadvertently, however, this locked the wheel brakes of the other landing wheels, causing them to burst into flames when AV2 landed – but the rest of the plane, fortunately, was safe. The harrowing video of the incident is still available on YouTube, embedded above.

Cotton and AV2 were extremely fortunate to remain in one piece. Unfortunately, three weeks later, AV2’s luck ran out; the aircraft was destroyed in a catastrophic mid-air collision with an F-104, killing two pilots and seriously injuring a third.

AV1 remained in service for another three years. In 1969, it was moved to the Air Force Museum in Dayton, Ohio, where it remains to this day. And while the XB-70 was not chosen for the role of a supersonic bomber, the concept was later taken over by the Lockheed A-12, the older sibling of the far more famous SR-71 Blackbird.