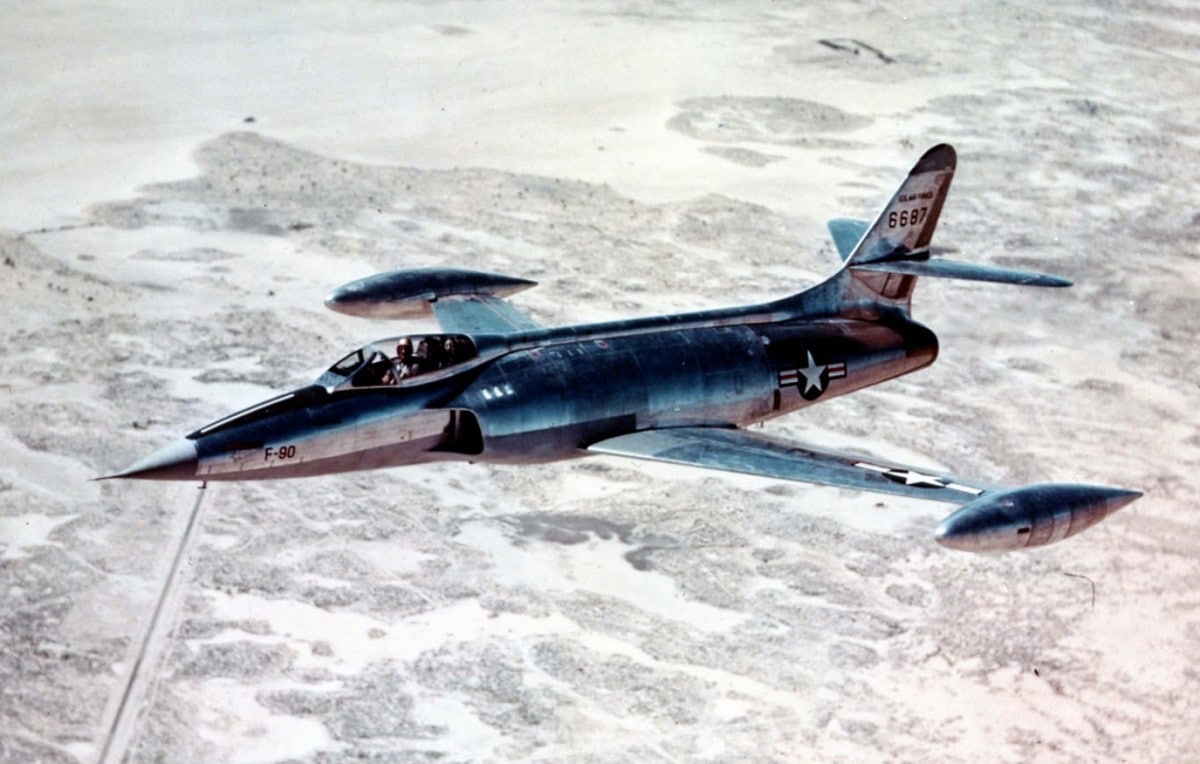 In 1945, the U.S. Army Air Force issued a requirement for a “penetrating escort” jet that could accompany comparatively ponderous B-29 and B-50 strategic bombers all the way to targets over the Soviet Union. It wanted that jet to be capable of supersonic speeds, boast a combat radius of 900 to 1,500 miles, and for the sake of versatility, also be capable of hitting ground targets.

The Air Force’s first operational jet, the Lockheed F-80 Shooting Star, was a reliable workhorse but its straight-winged configuration limited its potential at high speeds. Kelly Johnson, chief designer at Lockheed’s innovative Skunk Works facility in California, initially thought to overcome this limitation with a delta-wing configuration, but this would have degraded lift and thus low-speed performance. He iterated through sixty-five different concepts before settling on using swept-wings, which delay the formation of shockwaves at high speeds.

The jet’s side-mounted Westinghouse J34 turbojets would eventually include the Air Force’s first afterburners, which allow pilots to inject fuel straight into the jet pipe for bursts of added speed, though at a cost to fuel efficiency. Six 20-millimeter M39 cannons mounted in two rows under the nose would serve for armament, while wingtip fuel pods extended the XF-90’s range to a projected 2,300 miles.

As Chuck Yeager only achieved the first manned supersonic flight on October 14, 1947, Johnson’s team could only hypothesize that supersonic speeds would impose extreme stress on the airframe. This led them to over-compensate by using extremely high-strength 75T aluminum alloy instead of the standard 25T.

This made the XF-90 as tough as “bridge girder,” resulting in one of the largest and heaviest single-seat fighters ever made at the time. It weighed nine tons empty, comparable to the C-47 cargo planes that dropped paratroopers over Normandy, or a modern F-16 jet. The XF-90’s aluminum skin could withstand twelve times the force of gravity, while most modern fourth-generation jets are rated for nine Gs.

Johnson also incorporated relatively new elements including an ejection seat, wingtip fuel tanks that extended range to 2,300 miles, and Fowler flaps. These last can extend horizontally, increasing wing surface and lift at little cost to drag, as well as bend down vertically to induce more drag.

On June 3, 1949, test pilot and former aerial racing champion Tony Levier took the XF-90 out for its first flight. However, the J34’s engines proved underpowered, leaving it slower than the Air Force’s excellent F-86 Sabre fighter jet and resulting in long takeoff and landing distances. The afterburner equipped XF-90A only boosted maximum level speed to 665 miles per hour, a disappointing performance for a plane dubbed ‘the big-breasted turkey.’

However, the XF-90 could attain more impressive speeds while in a shallow dive. In a fascinating article by Jorge and Karen Escalona for Air & Space, Lockheed engineer Ernest Joiner recalled:

“The test program was to conduct power-on dives to work up to the so-called sound barrier. We were on the radio with Tony as he made a dive at fairly low altitude. We could see the airplane on the other side of the dry lakebed. It disappeared in the haze. At that moment we heard a tremendous explosion.

There is no doubt that both Kelly and I thought that the airplane had augured in. I was afraid that Kelly was going to have a heart attack. Within a very short time Tony called in on the radio. Talk about relief! He had dived the airplane to Mach 1.12 and everything was fine. You have to realize that we hadn’t heard a sonic boom before.”

The XF-90 reportedly achieved supersonic speeds fifteen times. However, in August 1950 the XF-90 was pitted in a fly-off against the McDonnell Douglas XF-88 Voodoo, which used the same two J34 engines but weighed only six tons. The XF-90 promptly lost the competition.

However, the XF-88 fared little better in the long run, as the tactical air power demands imposed by the Korean War led the Air Force to abandon its long-range escort fighter project. The XF-88, would eventually evolve into the F-101 Voodoo, the reconnaissance variant of which saw extensive action during the Vietnam War.

Ironically, that same year, the XF-90 was catapulted to fame as the then super-popular Blackhawks comic books series made it the steed of choice for the titular squadron of ace pilots. The single-engine “F-90B” was featured on the cover of issue #68 and even had its schematics compared to a Soviet MiG-15 fighter in issue #52. Starting in 1957, the artists switched to a sleeker rendition of the XF-90 with a mid-fuselage wing.

Reality was less glamorous for the XF-90. In 1952, XF-90 46-687 was shipped to the NACA (predecessor to NASA) testing facility in Cleveland, Ohio where its sturdy aluminum frame was subject to stress tests until it was apparently destroyed.

The Pentagon had even harsher treatment in store for 46-688, which was moved to the Frenchman’s Flat testing range in Nevada. In an era when nuclear war seemed imminent, the Pentagon wanted to know just how likely parked aircraft were to survive a nuclear first strike by enemy bombers—as you can see in this old documentary footage.

So on April 15, 1952 a B-50 bomber dropped a 1-kiloton Mark 4 nuclear bomb just a half-mile away from the XF-90, with its nose pointed towards ground zero. Inspection afterward revealed the jet to be cracked but intact, in need of 106 hours of repairs. You can briefly see post-strike footage here.

A week later, a 33-kiloton nuke was dropped on the same spot—this time, dinging the XF-90A’s nose.

Finally, on May 1, a 19-kiloton bomb blasted the XF-90, which was this time rotated perpendicular to the shockwave. The detonation blasted off its tail and landing gear and seared and warped its wings. The contaminated hulk was then transferred to Nevada Area 11 as part of a training exercise.

The XF-90A might well have rusted away into obscurity in the desert had not scientist Robert Friedrich recognized the irradiated wreck while flying overhead. In the late 1980s he lobbying to have the unique jet preserved for display.

Finally in 2001 specialists in hazmat suits disassembled the jet down to its rivets, spraying away the radioactive sand encrusting it and evicting a colony antelope squirrels which had nestled inside. They found the J34 engines in surprisingly intact condition.

The decontaminated parts were transported via a huge C-5 Galaxy transport plane to the U.S. Air Force Museum in Dayton Ohio, where it was decided to preserve its nuke-blasted condition rather than fully restore it. The airframe currently remains there in storage.

While the XF-90 was not a successful design, it gave U.S. engineers their first experience developing a clean-sheet jet with afterburning engines, ejections seats and Fowler flaps. For every famous jet fighter like the F-86 Sabre or F-16 Falcon, there is often a connective sinew of prototypes pushing the technological envelope that never make it into service, whether due to teething issues or external factors.

Ironically, seventy-years later, the Air Force has returned to the same concept it ordered for the XF-90: it plans for its sixth-generation stealth jet to be a “Penetrating Counter-Air” fighter to protect stealthy but slow B-2 and B-21 bombers deep over enemy airspace.