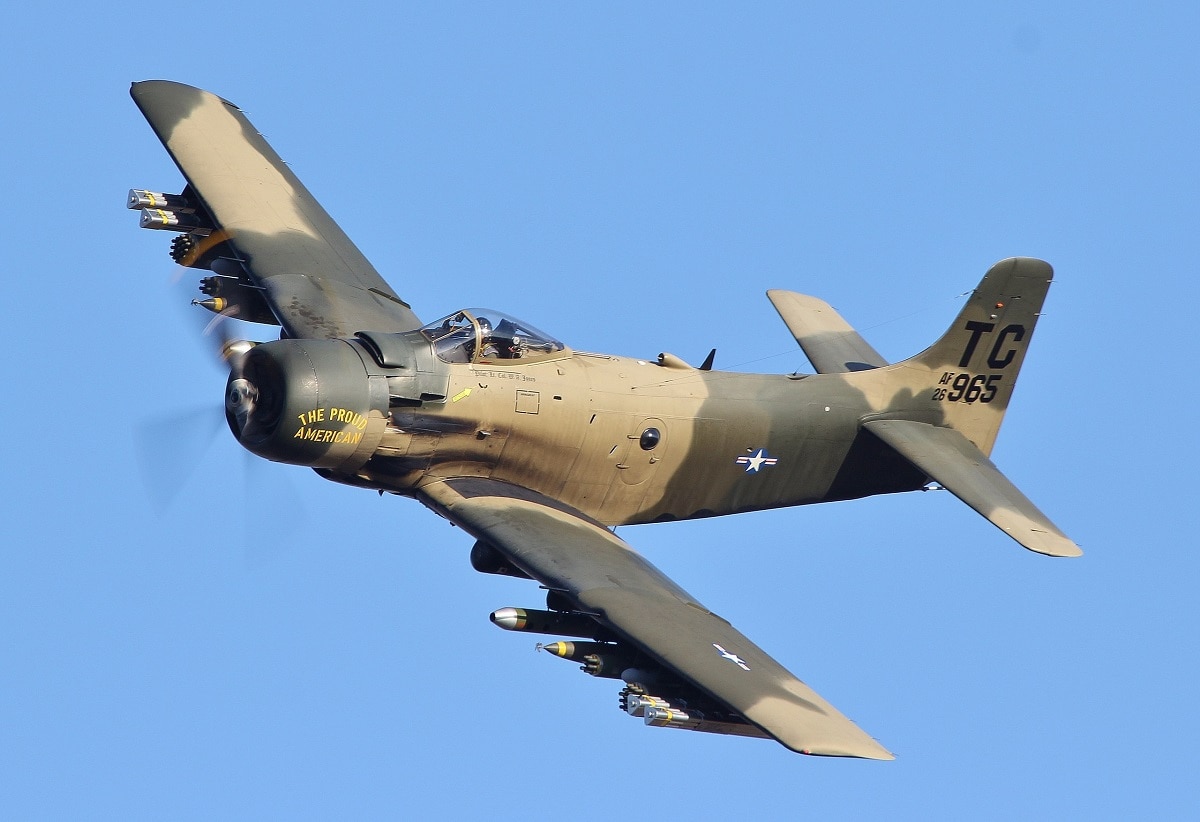 It could carry more, far farther, and stay airborne longer than most jets—making it an indispensable weapon of war.

At the advent of the jet age, new and radical airframe and engine designs pushed the limits—quite literally—of flight. Faster, farther, and with ever-increasing payloads, some of the early jets promised a revolution in aerial warfare. And they delivered: a plethora of airplane designs came from the world’s aerospace heavyweights, with the United States and the Soviet Union leading the charge forward.

Despite the myriad advantages offered by jet-powered aircraft, however, one famous little airplane eschewed modernity: the Douglass Skyraider.

Powered by a single-engine, the Skyraider was a paradox of the jet age. Its origin story begins during the waning days of World War II when the Douglas Aircraft Company designed a carrier-based airplane—allegedly in a single night—that had long endurance and could be used as a dive bomber as well as a torpedo plane.

Unfortunately, the little plane came too late to fly any combat sorties during that conflict and instead made its combat debut during the Korean War, flown by U.S. Navy and Marine Corps pilots. The Skyraider typically flew in a dark blue livery, and somewhat unexpectedly offered several advantages when compared to jet airplanes of the era.

The robust plane’s armament was nothing to sneeze at: it packed a total of four twenty-millimeter cannons into its airframe and could also fly with an assortment of rockets, torpedoes, bombs, and gun pods mated to its pylons.

Not only could it carry an astonishingly high weapons load-out for a plane of its size, but it also could stay airborne for nearly half a day—a flight endurance time significantly greater than virtually all jets. And if that wasn’t enough, the sturdy plane could absorb a huge amount of enemy fire and still remain capable of flight.

The Skyraider did not fare particularly well in combat against jet airplanes and was susceptible to ground-based anti-aircraft fire, though this was later rectified by the addition of about six hundred pounds of armor plating which affected handling only minimally.

The Skyraider also saw combat during the Vietnam War, where the U.S. Navy used the aircraft as a medium attack airplane. Despite the more widespread use of jet fighters, Air Force Special Operations groups continued to rely on the Skyraider to provide air cover during search and rescue operations, which thanks to its endurance and payload capacity, excelled at.

Despite clearly being a design from the pre-jet era, the Skyraider’s unique combination of very high flight endurance combined with a great deal of payload capacity meant that for many years it just couldn’t be beaten, especially in niche roles such as search and rescue close air support. Despite its old age and even older design, the Skyraider managed to stay relevant for a long, long time.

Caleb Larson is a defense writer based in Europe. He holds a Master of Public Policy and covers U.S. and Russian security, European defense issues, and German politics and culture. This article is being republished due to reader interest.