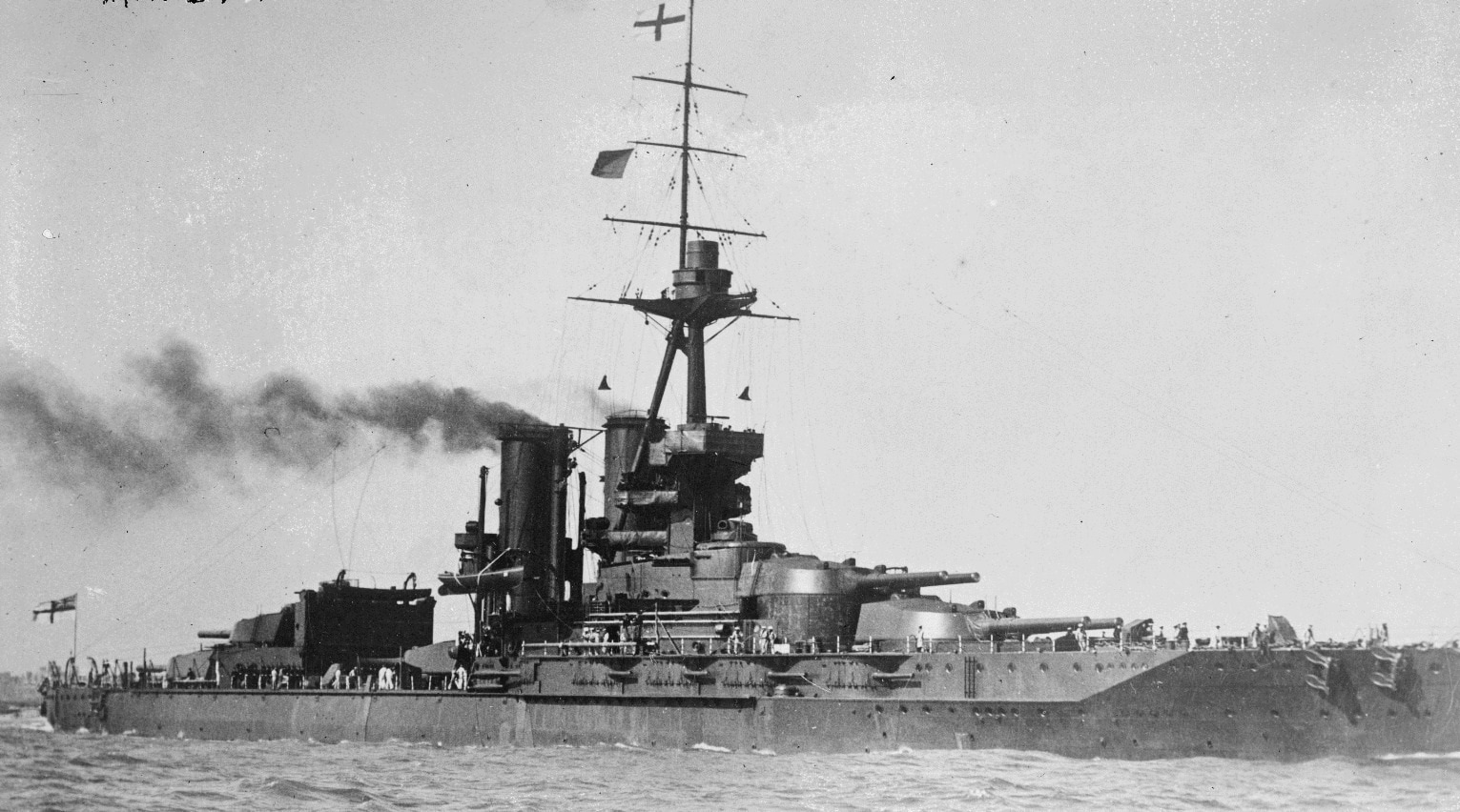 HMS Iron Duke was the second battleship named after the Duke of Wellington. The first, scrapped in 1906, had the distinction of ramming and sinking HMS Vanguard, another Royal Navy battleship. The second Iron Duke was the name ship of the last class of dreadnoughts to enter Royal Navy service prior to the beginning of World War I. It and its sisters were considered “super-dreadnoughts,” an ill-defined term that distinguishes the second generation of dreadnought battleships from the first. Generally speaking, super-dreadnoughts avoided wing turrets, carrying guns in the centerline with super-firing turrets. Most super-dreadnoughts carried weapons heavier than twelve inches (although this varied from country to country), and had more advanced armor schemes. However, no one has successfully established a clear definition for the distinction.

Laid down in 1912, Iron Duke was commissioned in March 1914. It displaced twenty-five thousand tons, and carried ten 13.5-inch guns in five twin turrets. Its secondary armament, deployed in single casemates, consisted of twelve six-inch guns. Like most Royal Navy battleships of the era, it could make twenty-one knots. Iron Duke was a well-designed ship, capable of outgunning its German (if not its American) counterparts, and serving as the basis for the even more heavily armed Chilean battleship Almirante Latorre. The Iron Dukes were the third four-ship class of super-dreadnought (following the Orions and the King George Vs), and represented a staggering acceleration of peacetime naval construction on the part of the United Kingdom. The Royal Navy, mindful of its competition with Germany, would commission twenty-two super-dreadnoughts between 1912 and 1917, plus another half-dozen battlecruisers. Only U.S. aircraft-carrier construction in World War II can compare with this level of productivity.

HMS Iron Duke became flagship of the Grand Fleet upon its creation in August 1914. Iron Duke carried the flag of Adm. John Jellicoe, who had been promoted by Winston Churchill to command at the beginning of the war. Jellicoe’s job was to not lose the war, and the way to do that was to avoid being destroyed by the German High Seas Fleet. Given that the German fleet was smaller than the Grand Fleet and was limited geographically, this was an achievable task. Jellicoe understood that numerical superiority was key to victory in modern naval engagements, and steadfastly refused to allow the Royal Navy to meet the High Seas Fleet in detail. Consequently, the Grand Fleet spent most of its time conducting gunnery and seamanship drills, punctuated by the occasional sortie to try to catch the High Seas Fleet in the open.

The only genuinely productive sortie of this sort came in late May 1916, when Iron Duke served as Jellicoe’s flagship at the Battle of Jutland. At the head of the British line, it inflicted serious damage on the German battleship SMS Konig, as well as several smaller ships. The German prey escaped in the night, however, and Iron Duke returned to Scapa Flow as the Navy became mired in controversy. The failure to destroy the High Seas Fleet, despite obvious British advantages, took a severe toll on public and elite impressions of Admiral Jellicoe. Jellicoe was eventually “promoted” out of the command of the Grand Fleet, and replaced by David Beatty. The crew of Iron Duke didn’t care for the new admiral, so Beatty moved his flag to Queen Elizabeth. The rest of Iron Duke’s World War I career was uneventful.

The Washington Naval Treaty culled the world’s battleship fleets, but Iron Duke survived the first cut of 1922. It served extensively in the Black Sea and in the Mediterranean, helping to manage the fallout of the Russian Civil War and the Greco-Turkish War. The Royal Navy investigated a modernization scheme in the late 1920s, but expected the pending London Naval Treaty of 1930 to further reduce the number of allowable battleships. Instead of a modernization, Iron Duke was demilitarized, losing most of its armor and much of its armament. It served as a gunnery training ship for the rest of the 1930s, and was an accommodation ship at the beginning of World War II. In October 1939, long-range German bombers struck Scapa Flow, and damaged it badly enough to force a grounding. A March 1940 raid inflicted additional damage, and Iron Duke would remain in place for the balance of the war. In 1948 Iron Duke was sent to the breakers.

HMS Iron Duke and its sisters perfectly captured the “super dreadnought” concept; their large guns, tripod masts and balanced appearance made them look both stout and deadly. Iron Duke seemed singularly well named for its role as flagship of the Grand Fleet, although it is odd that the greatest collection of Royal Navy capital ships was led by a ship that took the name of a British Army commander. Its type was of so little use by World War II that the Royal Navy made no effort to restore it to frontline service, as it would have suffered badly under the guns of modern German, Japanese and Italian warships.