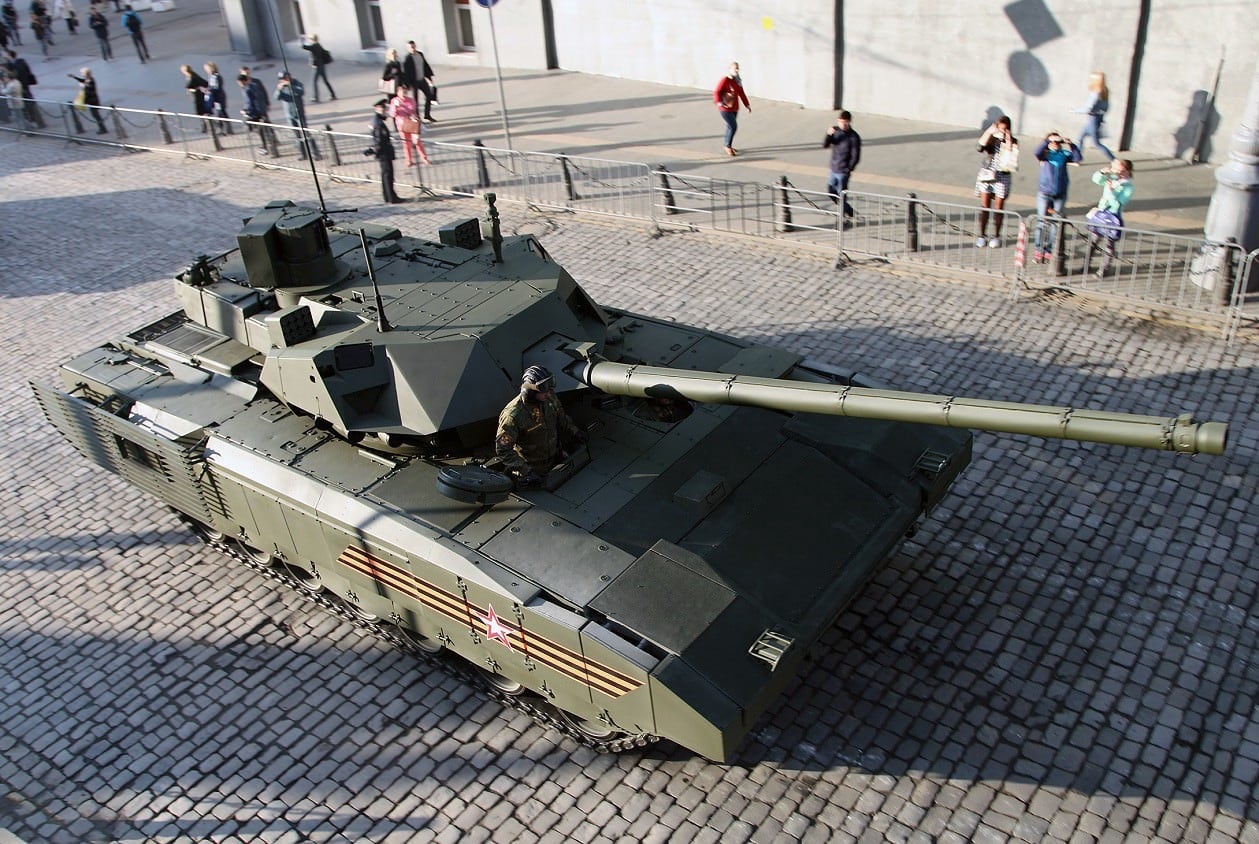 A question of numbers: the T-14 Armata main battle tank (MBT) is one of the Russian defense industry’s most ambitious new products, but cost and supply concerns loom large.

The T-14 was first unveiled during the 2015 Victory Day Parade in Moscow. It is a next-generation MBT based on the Armata Universal Combat Platform, which also includes the T-15 heavy infantry fighting vehicle (IFV) and T-16 armored recovery vehicle.

The T-14 comes in at forty-eight tons and can reach speeds of up to ninety kilometers per hour. Sporting a much more powerful 1,500 horsepower engine, the T-14 is substantially faster than its T-90 predecessor while offering a comparable operational range of at least 500 km.

The Armata tank is protected by the latest of Russia’s Malachit explosive reactive armor (ERA) system, as well as the Afghanit active protection system (APS) that uses both soft-kill and hard-kill methods to destroy and divert incoming projectiles. The T-14’s “Mantiya” masking system features a radar-absorbent coating that the manufacturer claims will protect the tank from detection, although the full extent of its low-observability performance remains to be seen. The tank employs a wide array of modern sensors, communications equipment, and other onboard electronics, including an active electronically scanned array (AESA) radar used by the APS.

This advanced equipment is partly necessary to support the T-14’s most flagship feature: an unmanned turret with autoloader capability. Rather than sitting next to the gun, the crew members are tucked away inside an armored capsule within the tank. This means that there is no way for the commander to pop their head out of the vehicle, making the crew entirely reliant on the tank’s onboard sensors for situational awareness.

The T-14’s 125-millimeter 2A82-1M smoothbore gun tracks, targets, and engages targets automatically. “The Armata crew does not need to aim accurately,” said Rostec CEO Sergey Chemezov. “It only has to aim the gun roughly. Electronics will do all the rest: it will accurately determine the distance to the target and aim the gun at it. That is, the vehicle uses artificial intelligence elements that help the crew deliver fire.”  The tank uses artificial intelligence and other advanced targeting algorithms to present the operators with an optimized shot, but Chemezov adds that the decision to fire must still be taken manually by the crew or a remote human operator.

Loaded with class-leading features, the T-14 appears more than capable of any active-service North Atlantic Treaty Organization (NATO) tank a run for its money. But this level of performance doesn’t come cheap. Though the T-14’s projected per-unit price of $4 million dollars measures up well against other fourth-generation MBT’s like South Korea’s K2 Black Panther and Turkey’s Altay, that is still a major strain on Russia’s relatively modest defense budget (commonly assessed in the neighborhood of $60 billion, though there is more to this number than meets the eye).

T-14 output has fallen drastically short of the military’s initial plan to acquire 2,300 models through 2020. Russia’s Ground Forces currently have a small number of pre-production Armata units. Defense Minister Sergei Shoigu as well Industry and Trade Minister Denis Manturov have both recently announced that the tank will enter serial production in 2022, shortly following the end of state trials that same year. It remains unknown how many of these tanks are currently scheduled to enter service, and how quickly, as Moscow struggles to find a sustainable growth model for the T-14 platform into the coming decades.