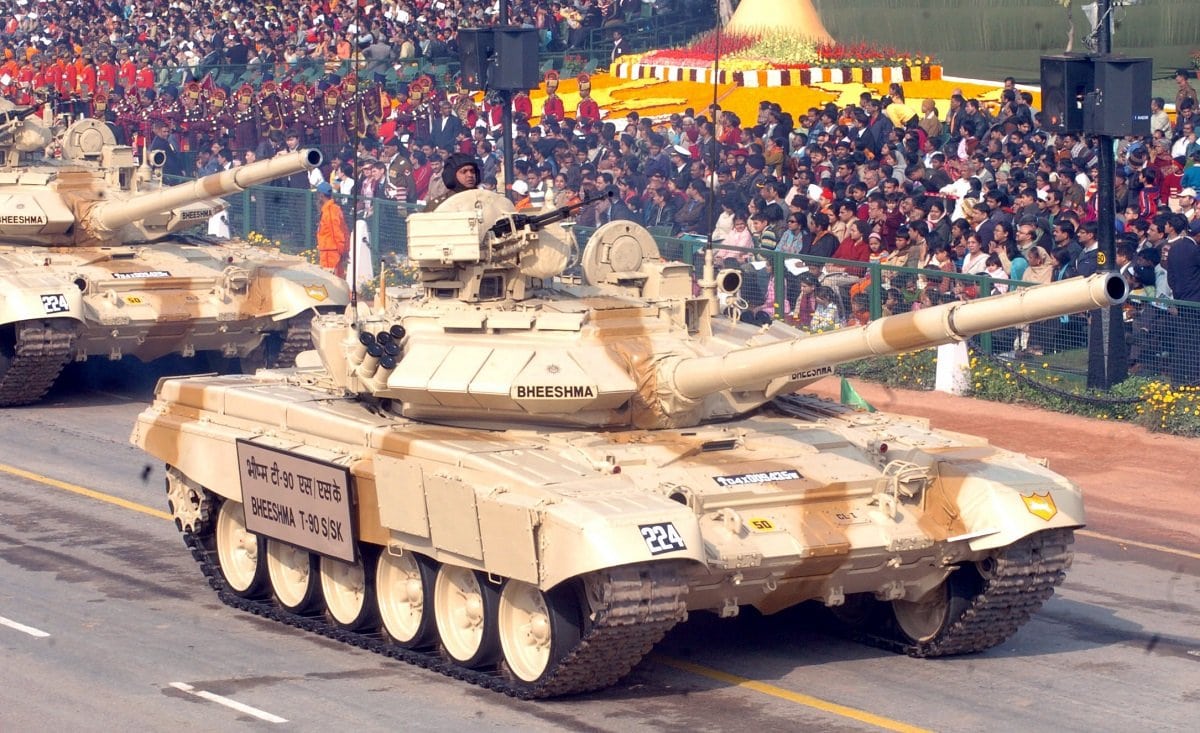 The T-90 has its roots in a late Soviet program aimed at consolidating the T-64, T-72, and T-80 main battle tanks (MBT’s) into a single modern tank that can serve as a more sustainable long-term platform for future upgrades.

The tank that would become the T-90 was conceived as a deep modernization of the T-72, dubbed the T-72BU. This tank was promptly rebranded as the T-90– a marketing decision taken to emphasize the depth of its upgrades— and introduced into service in 1992.

The baseline T-90 model weighs forty-eight tons and is powered by V-84MS engines, boasting a top speed of sixty kilometers per hour and an operational range of around 550 kilometers. The T-90 shares a passing similarity with the prior T-72 models from which it is derived, but its familiar chassis belies a slew of design upgrades that propel it into a performance tier of its own.

The T-90’s protection system consists of three layers. First, there is the welded composite armor protecting the turret area. Then there is Russia’s Kontakt-5 explosive reactive armor (ERA). These ERA blocks, also known as bricks, give the tank its distinctive squared appearance. They are spaced and installed in such a way as to mitigate the penetrating power of certain armor-piercing munitions. Finally, there is the Shtora-1 countermeasures suite, consisting of early warning mechanisms, jamming tools, and automatically-discharged smoke grenades to confuse enemy targeting systems.

While it shares the chassis of the T-72, the T-90’s weapons suite is derived in large part from the T-80. The T-90’s arsenal is headlined by the 2A46M 125mm smoothbore tank gun, a distant and heavily modified relative of the Soviet Sprut heavy gun. The tank’s main gun accepts a wide range of ammunition types, including high-explosive anti-tank (HEAT-FS) and high explosive fragmentation (HE-FRAG) rounds, as well as 9M119M Refleks anti-tank guided missiles. Reflex’s missiles boast an effective range of up to 5 km, with partial automatic guidance features and the ability to target light, low-flying aircraft like helicopters. The T-90’s arsenal is rounded out with a 12.7mm remote-controlled anti-aircraft machine gun, as well as a 7.62mm coaxial machine gun.

Many of these specifications changed substantially in the following decades with the tank’s numerous variants, prompted in no small part by a steady stream of foreign demand. The modified T-90S became one of Russia’s most successful defense export products, and arguably remains the most commercially successful export tank of its time. 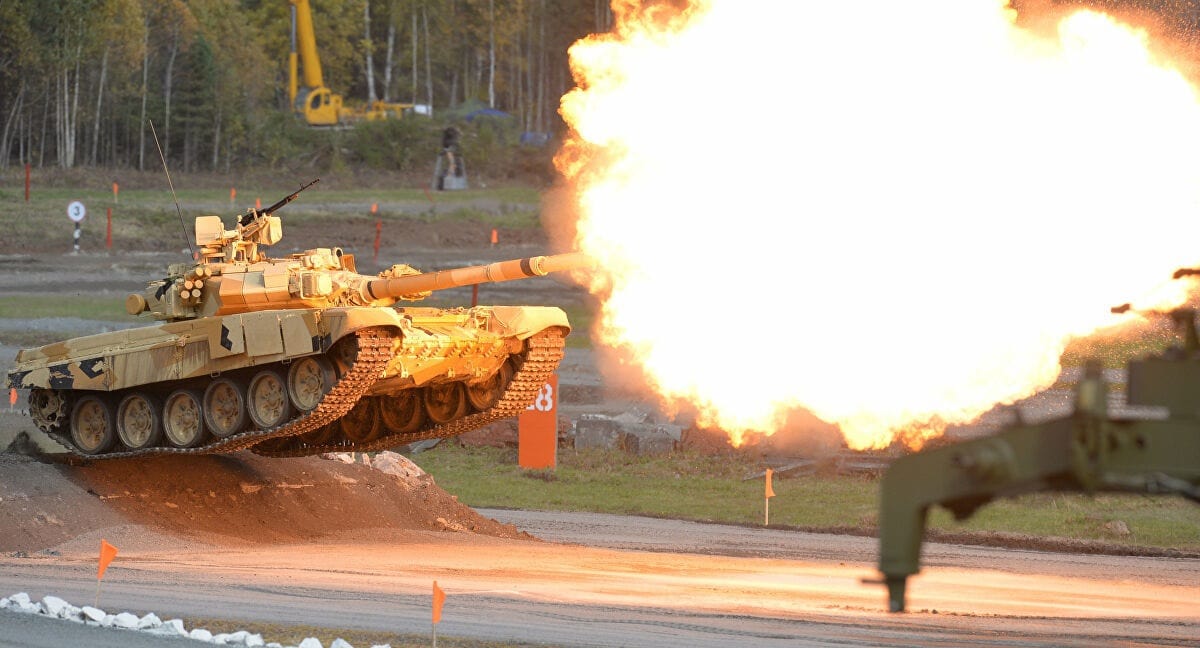 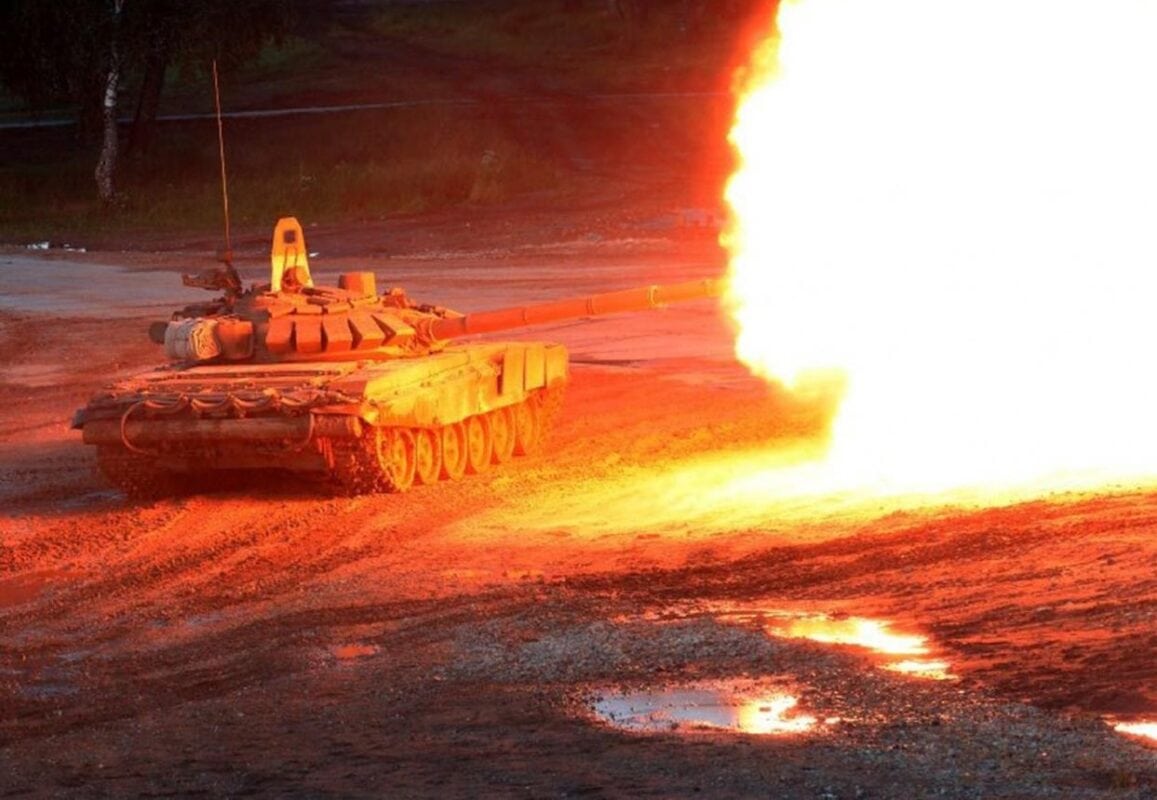 There are around 450T-90 tanks serving in Russia’s Ground Forces. Though only a small part of these are T-90M units, Moscow plans to upgrade its entire T-90 stock to the T-90M standard through the mid 2020’s.