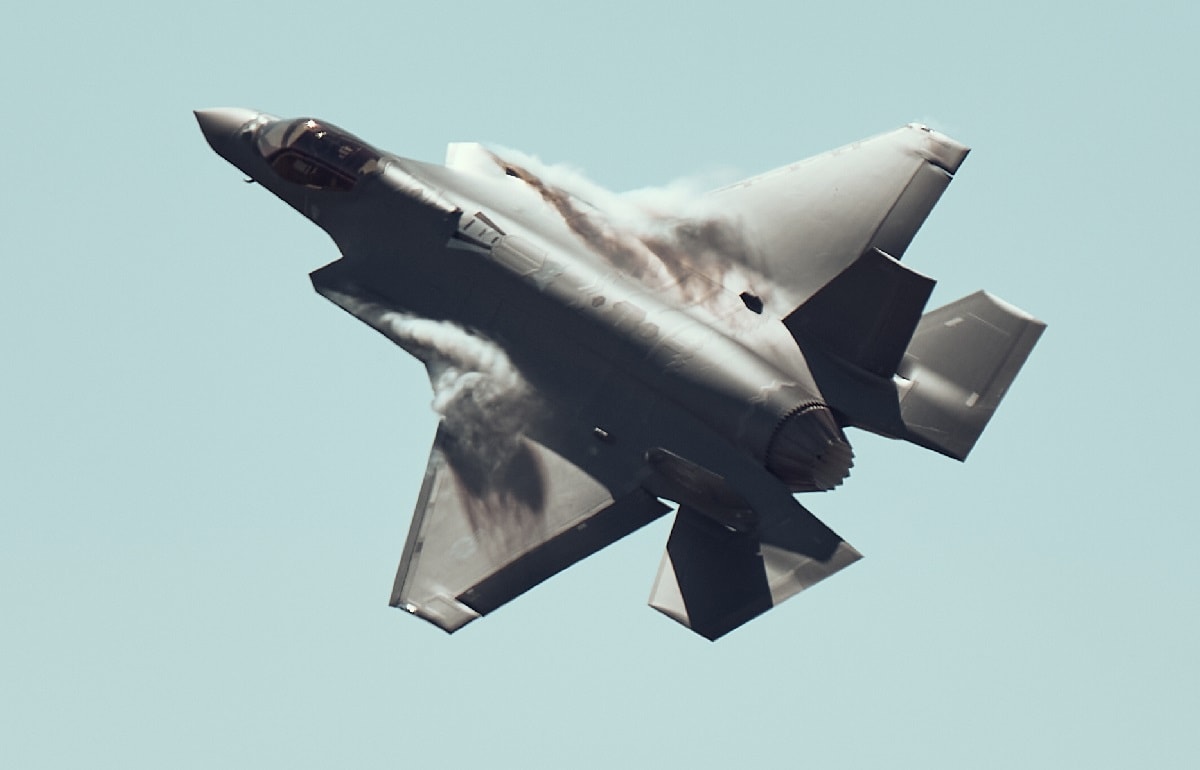 Roger Layn, a World War II veteran from Monkton, Vt., watches a landing of F-35A Lightning IIs assigned to the 158th Fighter Wing as they return from a training flight, Vermont Air National Guard Base, South Burlington, Vt., June 5, 2020. Layn, a 1st Lt. in the Army Air Forces as a bomber pilot who served in the European Theater and spent 15 months in a German P.O.W. camp, spent his 100th birthday with the 158th. (U.S. Air National Guard photo by Tech. Sgt. Ryan Campbell)

Here’s a thought: A U.S. Air Force F-35A Lighting II in a dedicated aggressor squad as part of red-teaming efforts during a recent air exercise.

It is not the first time that the Air Force has used its most advanced multirole stealth fighters in an adversarial role during an exercise, but it is the first time that F-35s have been utilized in more than just a supplementary capacity in such a role.

The use of F-35s to simulate hostile aircraft allows the Air Force to better replicate the growing threat posed by the development of more advanced, fifth-generation aircraft by both of America’s great power rivals in China and Russia. The participation of the F-35s also further demonstrates the growing prominence of the F-35A in both the Air Force’s fighter fleet and in its training activities on a growing scale, and the delivery of F-35s to dedicated aggressor squadrons has allowed the Air Force to make use of older Lightnings that it had previously considered retiring altogether.

The Air Force has just concluded its Red Flag exercise held at Nellis Air Force Base in Nevada – with a corresponding exercise in Alaska having already taken place in June – and some of the service’s F-35A aircraft took part in an important new capacity. The exercise was held from July 19 through August 6, and featured aircraft from 15 different squadrons and more than 2,000 Air Force personnel from across the country. Red Flag is one of the world’s premier air-combat exercises, and is valued by the Air Force as an opportunity to train its pilots to engage in high-end aerial combat operations.

During the exercise, some of the Air Force’s older F-35As participated by flying as simulated enemy aircraft. While F-35s have been utilized in this role in the past, they have only ever done so by augmenting dedicated aggressor aircraft. The most recent Red Flag exercise, however, saw F-35s flown as part of dedicated aggressor squadrons.

The F-35s were flown by pilots assigned to the 64th Aggressor Squadron (AGRS), a unit assigned to Nellis Air Force Base to serve as the “bad guys” during major air-combat exercises such as Red Flag. The Air Force previously had announced plans to reactivate the 65th ARGS based at Nellis Air Force Base and to provide it with nine low-rate initial production (LRIP) F-35As, which are to be operated alongside the squadron’s updated F-16 fighters. The transfer of this older F-35s to the reactivated squadron could allow the Air Force to find a use for some of its initial platforms that it has previously considered retiring altogether.

The 65th ARGS is now slated to receive as many as 12 F-35s that will be equipped with onboard software that allows them to better simulate enemy aircraft, but with the squadron not yet formally reactivated the task of flying F-35s in a dedicated aggressor role for the recent Red Flag exercise fell to pilots of the 64th ARGS.

The use of F-35s as dedicated aggressor aircraft is an important tool for the Air Force as it prepares for the possibility of engaging in high-end aerial combat in the future. Both Russia and China are developing their own fleet of advanced fifth-generation stealth fighters that will oppose U.S. Air Force warplanes in a future conflict.

The F-35A is increasingly becoming a much more prominent part of both the Air Force’s fighter fleet as well as the service’s large-scale training activities. The U.S. Air Force now operates more F-35As than any other aircraft in its fighter fleet outside of the venerable F-16 Fighting Falcon.

In addition, the F-35 has been used in greater numbers in training activities by the Air Force. A total of 52 F-35As took part in an elephant walk exercise in early 2020. The Air Force’s willingness to make use of so many F-35s in the exercise likely reflected a growing comfort with operating the aircraft as maintenance and flight costs associated with the F-35 have fallen in recent years.