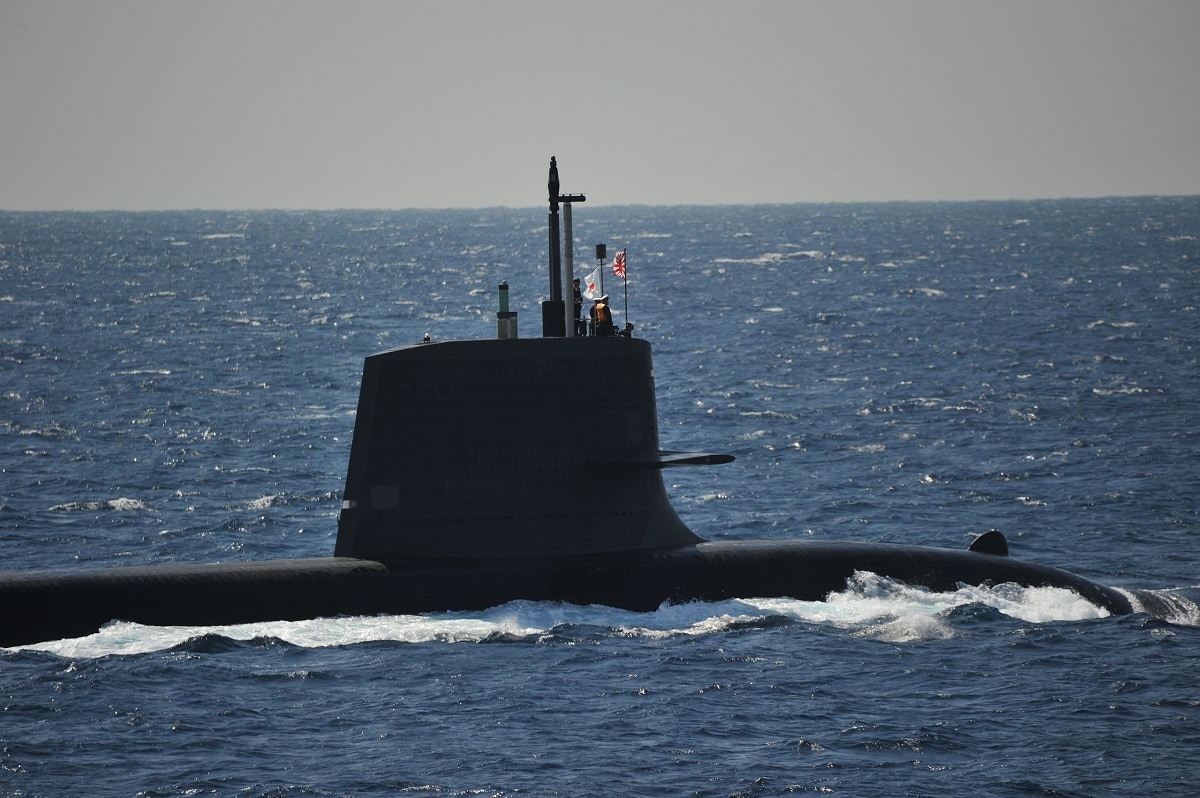 Among the more-than-ample reasons for acquiring a flotilla of diesel-electric submarines for the U.S. Navy: SSKs could help deter war by demonstrating American resiliency should war come in the Western Pacific. Deterrence comes from capability and visible resolve to use it. And from staying power. Foes blanch at starting a fight if they fear they can do little to blunt an antagonist’s warmaking capability. In short, resilient contestants deter. And should war come anyway, an artfully employed diesel contingent could help the United States and its allies—principally Japan—prevail in that war.

To recap the case for conventionally powered submarines: SSKs could comprise the nucleus of an allied fleet. Procuring a common platform with the Japan Maritime Self-Defense Force (JMSDF), constituting a combined silent service, and stationing that fleet permanently in the theater would show that America has skin in the game of defending Japan. Tokyo would draw confidence from such a fleet. The alliance would emerge refortified.

In other words, Tokyo need not fear being left in the lurch if American sailors stand shoulder-to-shoulder with their Japanese brethren—and if the Japanese state and society know for a fact the United States will always be there during a rumble in the Pacific. It’s hard to overstate the value to Washington of keeping faith with allies and friends. America has no strategic position in Asia without bases on Asian soil. Merging part of the U.S. Navy into a genuinely multinational fleet would make a powerful statement about multinational solidarity—and help guarantee access to those bases.

Moreover, these are the right subs for the strategic environment. That’s doubly so if allied maritime strategy aims at bottling up Chinese or Russian shipping within the first island chain—as it should. It’s commonplace for nuclear proponents to claim that diesel boats are unfit for the job of closing straits and narrow seas to surface and subsurface traffic. For proof they run through the laundry list of advantages SSNs boast over their diesel-driven cousins—advantages such as their ability to stay underwater for indefinite stretches and cruise at high velocity. Case closed.

Well, no. SSKs have no need to match SSNs; they need to be good enough for the job, and cheap enough to buy in bulk. In effect champions of nuclear submarines deny that diesel boats can do what they have done for many decades. The U.S. Navy Pacific Fleet sub force tormented the Imperial Japanese Navy during World War II, including along the island chain. Undersea warfare could have proved decisive in that conflict. The JMSDF unleashed similar tactics vis-à-vis Soviet and Chinese shipping during the Cold War. Both navies prosecuted an island-chain strategy to good effect, and with more rudimentary diesel boats than today’s to boot. Denying historical fact doesn’t add up to a terribly convincing case against SSKs.

An allied sub squadron wouldn’t need SSNs with breakneck speed and unlimited underwater endurance to defend a static island perimeter. SSNs excel at open-ocean combat, but they represent excess capacity and expense—and thus waste—for sentry duty. A U.S.-Japanese squadron would need subs to man the barricade in concert with surface craft, missile-armed troops on the islands, aircraft roving overhead, and well-placed minefields. Picket subs thus need to hover silently and stealthily along the island chain, awaiting their chance to strike.

Diesels can do that. The alliance needs enough sentries to keep up a constant rotation, assuring enough subs are always on guard, along with a reserve to shore up the line when vessels are lost in action. A U.S.-Japanese sub fleet would boast enough hulls to keep up a rotation along the Ryukyus. The JMSDF gets by with nineteen boats after a modest buildup, but the leadership wants more. Add a dozen or so American boats to the combined order of battle, and you’d have an undersea fleet able to hold the line with enough units to spare for offensive missions such as raiding shipping within the Yellow or East China Sea or the Sea of Okhotsk.

So this is the right force for the times, and it can be had at a low, low price compared to an SSN contingent. Affordability translates into mass for the fleet. The more boats the better. It appears that the price of the latest Japanese-built Soryu diesel boat is one-fifth that of the latest American Virginia-class SSN ($631 million v. $3.2 billion), but let’s assume you get four hulls for the price of one after the navy and Congress muck around with the program. That suggests the navy could outfit a twelve-boat squadron for the cost of three Virginias.

Or, rather than pit SSKs against SSNs within the shipbuilding budget, back-of-the envelope arithmetic suggests the navy could swap out littoral combat ships with negligible offensive capability for SSKs on a one-for-one basis. The latest LCS runs $646 million, to $631 million for a Soryu. Each LCS sacrificed—including three the navy never requested that this year’s defense budget foists on the service—would render good service by never being built.

But the case for diesel attack subs is even more compelling than their fit with alliance politics, the strategic environment, and budgetary realities indicates. A friend and former colleague likes to say that the combatant able to regenerate combat power the swiftest is the likeliest victor in war. Maritime illuminati such as Alfred Thayer Mahan and J. C. Wylie agree. Mahan and Wylie prophesy that the United States will suffer heavy reverses in the opening phases of any great-power war—the type of war, that is, that the Trump Pentagon has instructed the armed forces to gird for.

And so it may. The upshot: the armed forces and the defense-industrial sector need to amass sufficient capacity to ride out Chinese or Russian haymakers in the opening rounds without suffering a knockout. After getting staggered they must regenerate strength in bulk, and in a hurry, so the U.S. military can deal out crushing counterpunches of its own. How will the U.S. Navy silent service replenish its numbers after incurring the wartime losses it will incur in the order of things? Not—or at least not entirely—by laying down new SSNs. The U.S. Navy will need to replenish its subsurface combat power by mass-producing new submarines in haste.

Yet nuclear propulsion plants and hulls to house them are assembled neither quickly nor cheaply. Purchasing two Virginias per annum has strained the industrial complex’s capacity for nuclear work, in part because shipwrights are also fashioning a new class of nuclear-powered ballistic-missile submarines to replace the aging Ohio class. As a consequence the SSN tally is more or less stagnant even without battle casualties to make up. If builders find it hard to sustain fleet numbers in peacetime, it’s doubtful they have surplus capacity to step up SSN construction when boats start descending to Davy Jones’ locker.

That leaves conventional propulsion. SSKs may find a role in open-ocean combat out of sheer necessity. Overseers of U.S. maritime strategy, then, must search out infrastructure and methods for adding new conventionally powered hulls to the fleet in large numbers in short order. U.S. shipyards built their last diesel sub in the 1950s. Accordingly, naval magnates should open conversations about buying Japanese, taking advantage of the settled Soryu design and hot production line. Manufacturing diesel boats at American yards in tandem with Japanese firms is another possibility. Or the navy and shipbuilders could do both. Granted, coaxing Congress and the America First presidential administration into such a departure from longstanding practice would take determined diplomacy. So let the coaxing begin.

Deterrence and warfighting exigencies demand it. The U.S. Navy and its political masters must expand capacity by any means necessary, and start pronto. Regenerating combat power in slow motion charts a surefire route to defeat. As with so many naval topics, looking back to World War II constitutes a starting point for wisdom. The sheer volume of war materiel needed to vanquish the Axis forced U.S. Navy fleet designers to eschew the natural preference of military folk for armaments and platforms that are topflight in all respects. The republic needed good-enough gear en masse, and it needed it right away.

That meant drawing up adequate but simple designs, reaching out to as broad an array of manufacturers as possible—think Detroit auto factories retooling to churn out a finished B-24 bomber every hour—and getting the biggest head start possible. The U.S. Navy embraced a satisficing attitude that’s worth rediscovering. It also started regenerating combat power before it lost any. Thanks to sage leadership in Congress and the Franklin Roosevelt administration, builders started riveting new ships and planes together not after Japanese aviators rained destruction on Pearl Harbor in 1941, but a year before under the Two-Ocean Navy Act of 1940.

Preemptive reconstruction of battle strength ought to be the watchword for U.S. fleet architecture from now on. And there’s one final advantage to building up reserve capacity: it empowers fleet commanders to handle the existing fleet aggressively at the outbreak of war rather than act cautiously to conserve irreplaceable assets. Knowing replacement ships and planes are on the way lets commanders court risk—much as Admiral Chester Nimitz could fling the remains of the Pearl Harbor fleet into aircraft-carrier raids in 1942, knowing a brand-new U.S. Navy would arrive in Pacific waters starting in 1943. If you have a spare, why not risk what’s on hand in hopes of scoring a major triumph?

So there you have diplomatic, strategic, budgetary, operational, and tactical reasons for acquiring diesel submarines to augment the existing nuclear fleet. Let’s get to it.