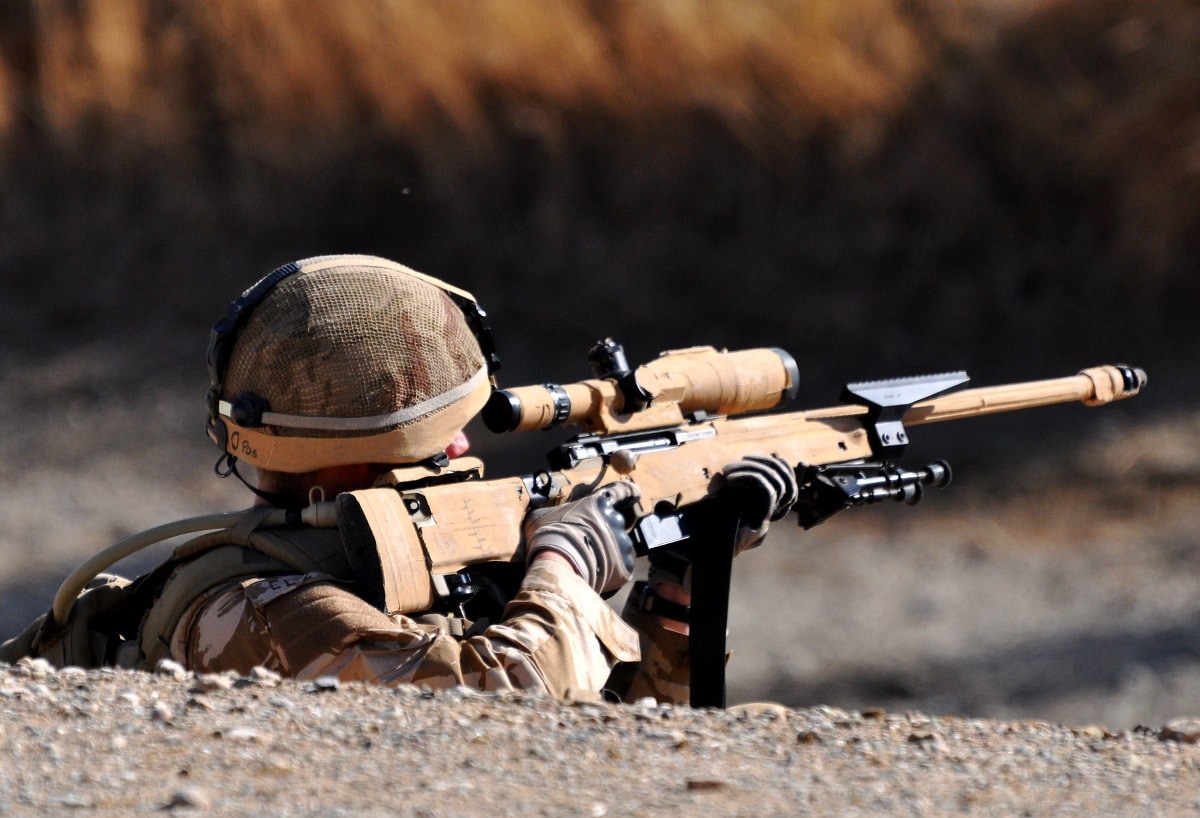 A sniper from the Mobility Recce Force of 1 Royal Welsh, aims his L115A3 rifle on a Reassurance Patrol north of Patrol Base Wahid, Nad-E' Ali, Helmand. The patrol had successfully partnered with a platoon of Afghan National Army soldiers for the patrol. British snipers fulfil a vital and enduring role on the battlefield, in terms of intelligence-gathering, target identification and eliminating high-value targets. The L115A3 rifle, part of the Sniper System Improvement Programme (SSIP), is a large-calibre weapon which provides state-of-the-art telescopic day and night all-weather sights, increasing a sniper's effective range considerably. The first batch of SSIPs were deployed to Afghanistan in May 2008.

Snipers are known to be military marksmen who engage targets from positions of concealment or at distances exceeding the target’s detection capabilities.

“They are experts at blending into the environment, masters of patience, physically developed, and always well-trained,” writes Ian D’Costa at We Are the Mighty.

With such a resume, they are indeed some of the most important shooters in any war zone. But they also need the right equipment, such as the perfect rifle that one can count on to do the job each and every time.

That one such rifle is the highly regarded L115A3.

According to D’Costa, “in 2009, British Army sniper Craig Harrison set a new world record for the longest confirmed kill in history with his L115A3, the standard long-range marksman’s rifle of the British military. During an ambush on a convoy he was attached to, Harrison hit a pair of Taliban machine gunners using ten carefully placed shots at a range of 2,707 yards, beating out the previous record by fifty yards.”

Melvin Ewing of Snipercentral.com writes that “it can be argued that the Accuracy International Arctic Warfare is the most successful modern sniper rifle produced and it has served the United Kingdom, and many other countries admirably since its inception in the 1980s.”

He continues: “When the United Kingdom needed to provide an improved rifle with greater capability for use with their Special Operations forces, they again turned to Accuracy International.”

According to military-today.com, “in 1996 the Arctic Warfare Magnum rifle, chambered in .338 Lapua Magnum (8.6×70 mm) ammunition, was adopted by the British Armed Forces as the L115A1. It was used by the British Army, Royal Marines, and the Royal Air Force regiment.”

“This weapon has some improvements over the L115A1, such as a different scope, side-folding buttstock with adjustable cheek piece, different bipod and a sound suppressor. A total of 580 L115A3 rifles were delivered to the British Armed Forces. These sniper rifles saw action during the wars in Iraq and Afghanistan,” it continues.

“The L115A3 is a bolt-action sniper rifle. It is chambered for a powerful .338 Lapua Magnum cartridge. This cartridge was specially designed for military snipers as long-range sniping ammunition. Its effective range is comparable with that of .50 BMG (12.7×99 mm) cartridge, though the .338 Lapua Magnum develops significantly less kinetic energy and penetration. In some cases, the .338 Lapua Magnum round can reportedly penetrate armored glass.”

Boasting an effective range of 1,500 to 1,700 meters, “it can neutralize enemy snipers at standoff range. The L115A3 is one of the best sniper rifles in the world,” it concludes.