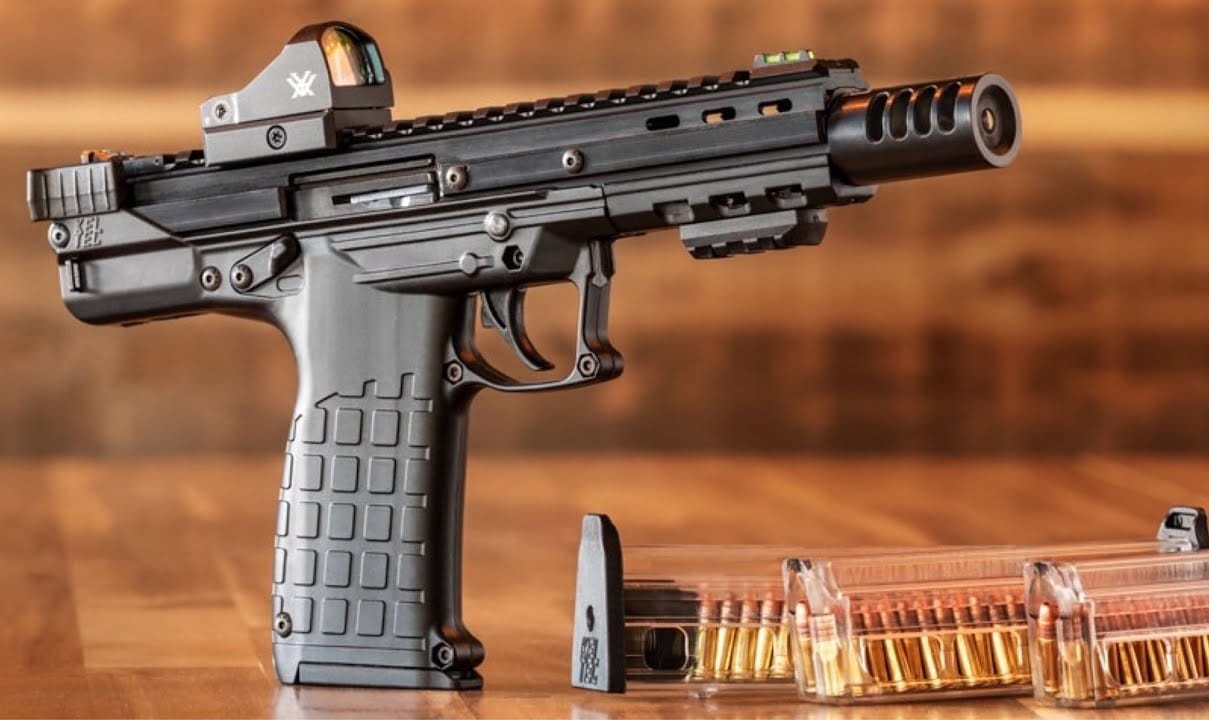 From “the world’s fastest reloading shotgun” to a Bullpup rifle that purports to eliminate the weaknesses of the Bullpup form factor, Florida-based firearms manufacturer Kel-Tec has distinguished itself for fresh takes on long-established formulas. It’s no secret that the rimfire pistol market hasn’t exactly been at the forefront of firearms innovation over the past several decades, but Kel-Tec seeks to change all that with one of the more unique handguns in recent memory: the CP33.

It’s immediately apparent from the pistol’s unorthodox design that the CP33 is anything but your typical .22 target pistol. The pistol grip is located closer to the center of the slide than most handguns. The slide is itself remarkable in that it houses a full-length picatinny rail to accommodate a wide range of optics choices, though the pistol ships with an adjustable, removable green-orange fiber optic sight system boasting a 9-inch radius. The MAGPUL M-LOK slot in the dust cover promises even more customizability, while the safety levers on both sides of the pistol make it perfectly ambidextrous.

But the star of the show is undoubtedly Kel-Tec’s recently-patented, transparent, jumbo-sized “quad stack” magazine that houses a whopping 33 rounds. If that’s not enough, Kel-Tec is offering an optional magazine extension that takes the CP33’s capacity up to 50– for context, that’s an entire small pack of of .22 LR rounds in one magazine. An impressive feat of magazine engineering, Kel-Tec’s “quadruple stack” system employs a stainless steel rod to split cartridges into two double-stacked columns running along either side of the magazine. Kel-Tec recommends only high-velocity ammunition with 40 grains or higher, as the use of lightweight and low-velocity bullets incurs the risk of feeding problems given the magazine’s unique design.

The CP33 handles with the ease normally expected of .22 LR pistols geared for target shooting, with a few twists that help it punch above its modest $475 MSRP. The trigger pull weight is surprisingly light at around 3.3 pounds and designed with attention to minimal creep/overtravel, while the forward grip placement contributes to a balanced handling experience. As with most guns in its caliber class, the 30 to 50 round magazine can be emptied with little to no recoil. The overall result is a seamless, accurate shooting experience designed to provide consistent results in a competition setting. There is no reason why the CP33 can’t be used to hunt small game at close ranges, though the pistol’s colossal capacity would be a bit of a waste in that setting.

At an overall length of 10.6 inches and loaded weight of just under 1.9 pounds, the CP33 is hardly a compact pistol. That may be just as well, given that the 22 LR caliber has long been controversial as a reliable self-defense round– as Kel-Tec delicately clarified in their branding, the CP33 is designed to make “short work” specifically out of “paper bad guys.” However, Kel-Tec has succeeded in designing a compelling option for target shooters in the market for a competition pistol, or simply a reliable plinker to bring along for prolonged practice sessions.