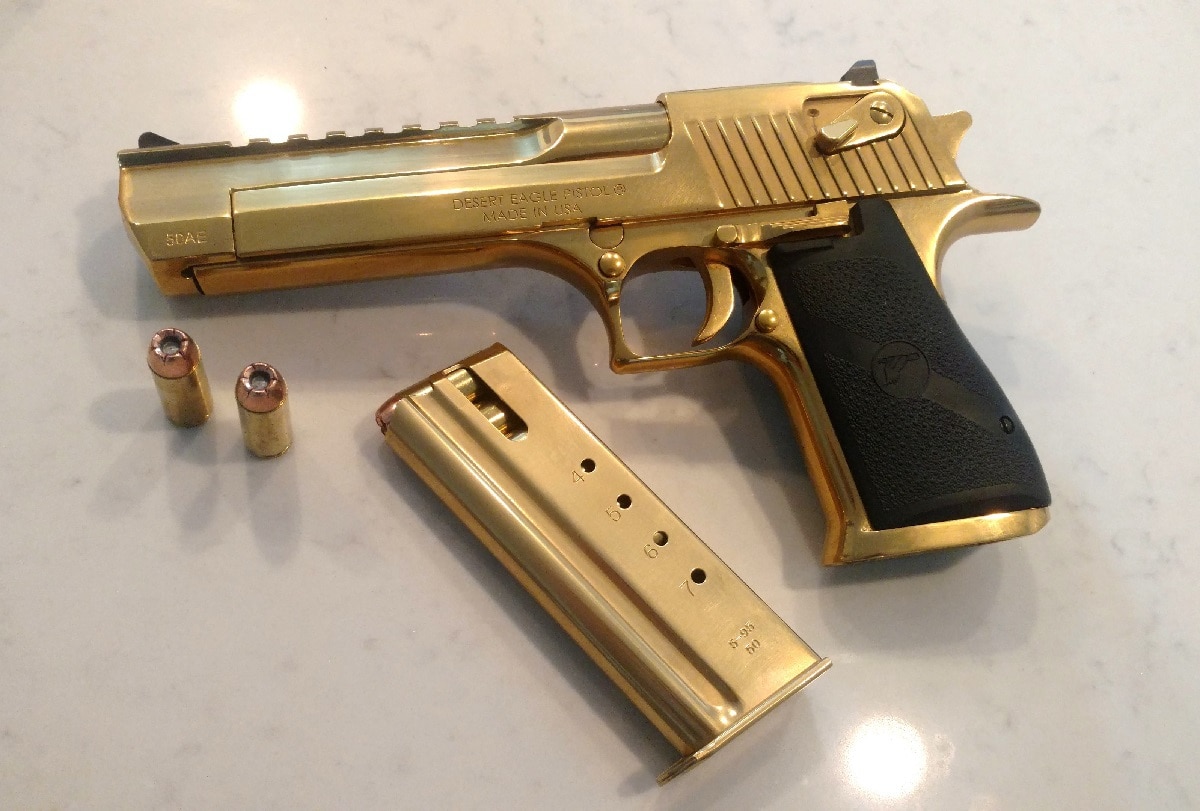 While it never had the big screen introduction that the .44 Magnum received thanks to Clint Eastwood’s “Dirty Harry,” the Desert Eagle has been featured in more than 600 films, television shows and video games.

First introduced in 1983, and initially chambered in .357 Magnum, the Mark I Desert Eagle was unique in the world of handguns. Developed by Israeli Military Industries (IMI), in collaboration with the American-based Magnum Research Inc., it was designed as a self-loading pistol that was able to shoot powerful magnum rounds. It wasn’t the first self-loading handgun that was capable of using such powerful rounds, but has become one of the most well-known, and today is one of the most famous – even infamous – handguns to appear in popular culture.

What also set the Desert Eagle apart from other semi-automatic “hand cannons” is that it was designed with a gas-operating rotating bolt mechanism that was more commonly found in self-loading rifles than the short recoil or blowback designs that are commonly used in semi-automatic pistols. The advantage of this gas operation is that it allows far more powerful cartridges to be used, while the downside is the large size of the handgun.

Desert Eagle handguns can be easily changed to another caliber by swapping out the barrel, bolt assembly and magazine. As noted, the handgun was first introduced in .357 Magnum, but subsequent models were offered in .41 Magnum, .44 Magnum, .440 Cor-Bon, and .50 Action Express models. In fact, the latter .50 Action Express remains the largest centerfire cartridge utilized in any magazine-fed, self-loading pistol.

Ready for Its Close-up

When Eastwood’s Dirty Harry hit theaters in 1971 and essentially “introduced” the world to the Smith & Wesson Model 29 – which he erroneously described as the “most powerful handgun in the world” – that firearm wasn’t exactly new. It was first released in 1950, but didn’t actually appear in a movie until 1967’s Point Blank starring Lee Marvin. The gun wasn’t called out by name until Eastwood made it infamous.

By contrast, Magnum Research chairman and CEO John Risdall actively solicited prop houses in Hollywood to include the gun in the movies. Risdall essentially ensured the gun would be seen in everything from gritty crime dramas to action films to light-hearted romps. Just two years after its debut, in 1985 it was carried by Mickey Rourke’s character Captain Stanley White in the film Year of the Dragon, by Arnold Schwarzenegger’s John Matrix in Commando and even made an appearance in the comedy Police Academy 2: Their First Assignment.  Actors/actresses including Chow Yun-Fat, Mike Myers, Jason Statham and Queen Latifah could be seen with the Desert Eagle.

The Desert Eagle appeared on TV in such shows as Miami Vice, The Equalizer, Farscape, and The Sopranos, while in video games the handguns were carried by Tomb Raider Lara Croft.

While probably “more gun” than many of these characters needed, the Desert Eagle has continued to look good on the big and small screen.