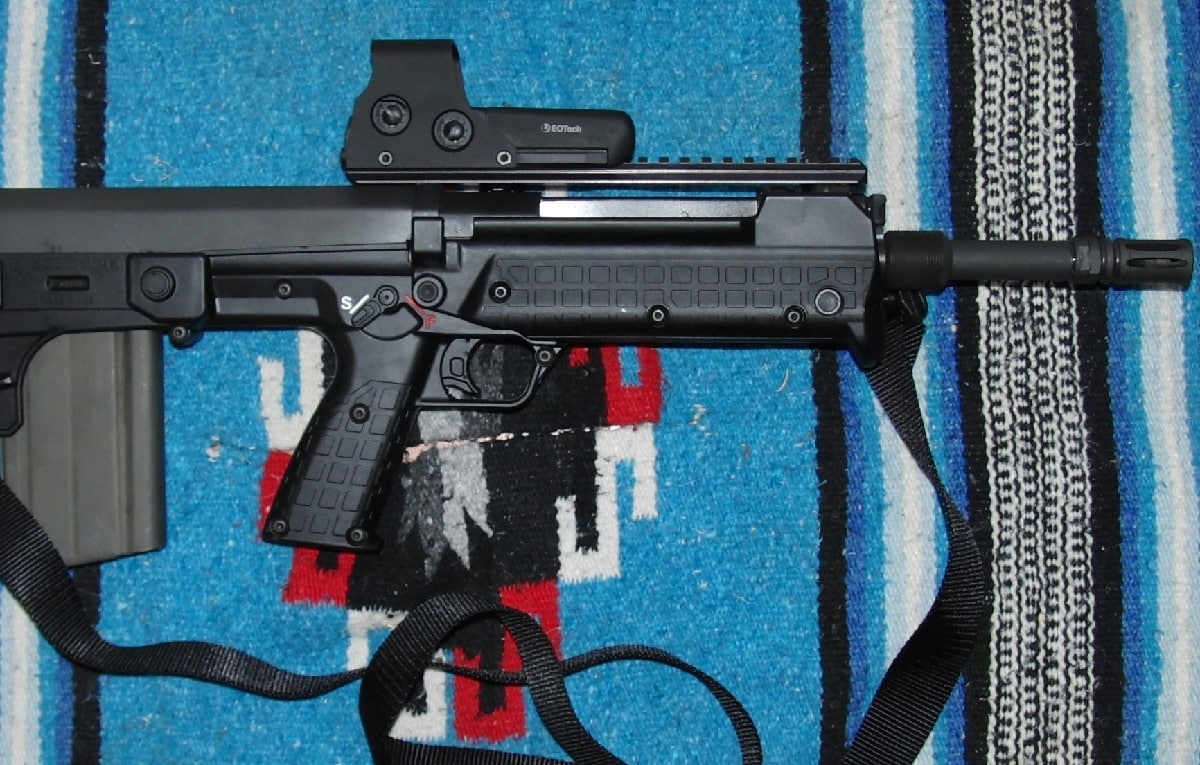 One of the more innovative players in the gun manufacturing space, KelTec is not averse to taking risks with unproven designs. The KelTec RFB (Rifle Forward-ejecting Bullpup) .308 Win is no exception, defying some of the common shortcomings of Bullpup rifles while introducing a few design tricks of its own.

Over the prior decade, the Florida-based company has made several, high-profile forays into the Bullpup market. KelTec’s KS7 and KSG bullpup shotguns received excellent marks for their unique design, comfortable ergonomics, and reliable performance in self-defense and tactical settings. Meanwhile, the KelTec RDB–short for Rifle Downward-ejection, Bullpup– is a formidable alternative to the AR-15.

But what sets the KelTec RFB apart from its many competitors, and does its innovative design truly lend itself to a better user experience?

First, the basics. A Bullpup is any type of firearm, whether it be a shotgun, rifle, or submachine gun, with the action placed behind the trigger. Squeezing in the action between the trigger and stock allows for a drastic overall reduction in gun length. This translates into better handling in indoors, urban, and in-vehicle contexts, but without the traditional tradeoff in accuracy that would come from cutting the barrel length.

This means that, in theory, that Bullpup weapons should be the undisputed king of close-quarters combat. In practice, however, there are serious issues with unique Bullpup design: 1) The cramming so many vital components into the lower half of the gun results in a spongy, less-than-perfectly-responsive trigger 2) the position of the action so close to the face can exacerbate noise issues while also amplifying the risk of serious injury in the case of catastrophic malfunction 3) Bullpups commonly eject to the right, which makes them notoriously unfriendly for left-handed users.

Kel-Tec designed the RFB to solve several of these issues outright, while greatly mitigating the others. Coming in at a reported pull weight of 5 pounds, the RFB’s trigger mechanism was built with the same long metal linkage that is a core component of the Bullpup design. However, KelTec’s specially designed trigger linkage-box allows for cleaner and more efficient routing, which translates it into much smoother trigger performance with no little to no overtravel. Left-handed users will be pleased to know that Kel-Tec has gone to great lengths to make the RFB almost perfectly ambidextrous, employing an ingenious forward-ejection mechanism that discharges empty cases from a front-facing tube rather than to the side.

The top rail is long enough for almost any optic, while an optional barrel mount can accommodate secondary lights. The RFB comes with a choice of 18 or 24 inch barrel versions, which are otherwise identical.

The RFB’s impressive features suite is not without caveats. Extreme operating loudness remains an issue with the RFB, though it’s highly inadvisable to fire any .308 weapon without the appropriate ear protection to begin with. The RFB is also quite hefty, even if 8 pounds is generally in line with similarly-performing .308 rifles.

The RFB, in short, is not your grandfather’s Bullpup. It commands an impressive, if not class-leading list of features for a .308 Bullpup rifle, making it a versatile choice for survival, long-range hunting, and competition purposes. More broadly, the RFB is a telling showcase of the drastic improvements made to the basic Bullpup design since its commercial debut in 1977.