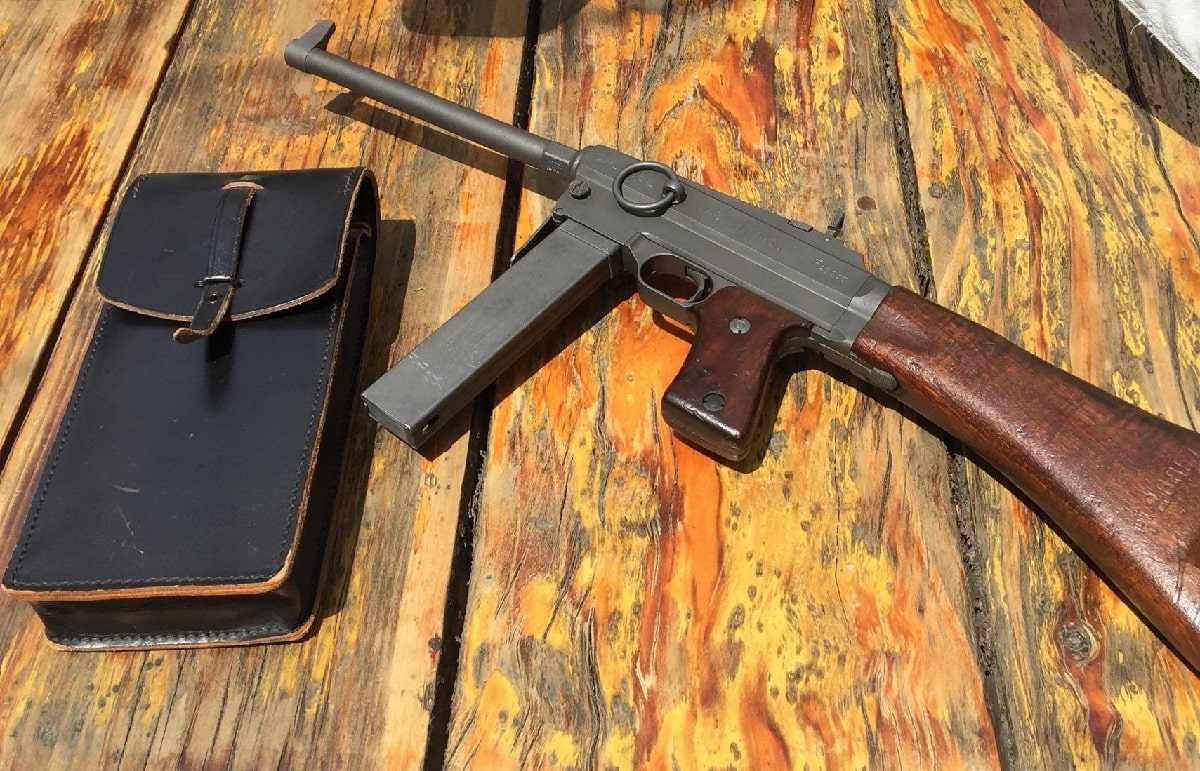 The MAS-38 was initially designed in the aftermath of the First World War by Manufacture d’armes de Saint-Étienne, a French firearms manufacturer, though the design was not finalized until the mid-1930s and entered serial production around 1937-38.

The submachine gun was chambered in an unusual cartridge, the 7.65x20mm Longue, an interesting but decidedly low-power pistol cartridge. The Longue was itself developed from a similar American pistol cartridge intended for use with American M1903 Springfield rifles in conjunction with an adapter device.

One of the upsides to using a very low-powered submachine cartridge was its controllability in full-auto firing—a boon to the French-made gun as it did not have a semi-automatic fire selector. Despite the Longue’s lower power, the French—ever contrarian—decided to retain it. A neat video of the MAS-38 and Longue can be seen here.

The weapon was actually fairly high-quality. Thanks in part to its pre-war development the MAS-38 featured extensive machined steel parts rather than relying on cheaper mass-production stamping techniques. Interestingly, the weapon’s safety was engaged by pushing the trigger forward.

Only a small number of MAS-38s had been completed before the German occupation of France. And, while the diminutive 7.65x20mm Longue performed poorly when compared to the German 9x19mm cartridge, the MAS-38 was nevertheless adopted by German troops as an alternative weapon.

Firepower shortcoming aside, the MAS-38 has several beneficial features. The double-stack magazines it used offered a good thirty-two-round capacity, and when not inserted in the magazine well, a handy dust cover could be flipped into place that would in theory keep out some dirt and grime. It was also quite a compact weapon. Overall length is just over twenty-four inches or nearly sixty-one centimeters, and the design does not have many protrusions that could catch on clothing—even the rear sight can flip into the top of the receiver.

The Gun that Killed Mussolini

Perhaps the MAS-38’s biggest claim to fame was as the weapon that was used to shoot and kill Benito Mussolini and his lover, Clara Petacci. After the fascist Italian regime fell during the Second World War, he and Petacci were captured by Italian partisans and executed with a MAS-38. How the French-made submachine gun made it to Italy is unclear, though it may be possible that the weapon was picked up or taken from German stocks.

Despite the MAS-38’s poor performing ammunition, the submachine gun’s robust, high-quality parts delivered it far and wide on European battlefields. Not too bad for what is perhaps one of the lowest-powered submachine guns to have been produced during the war.