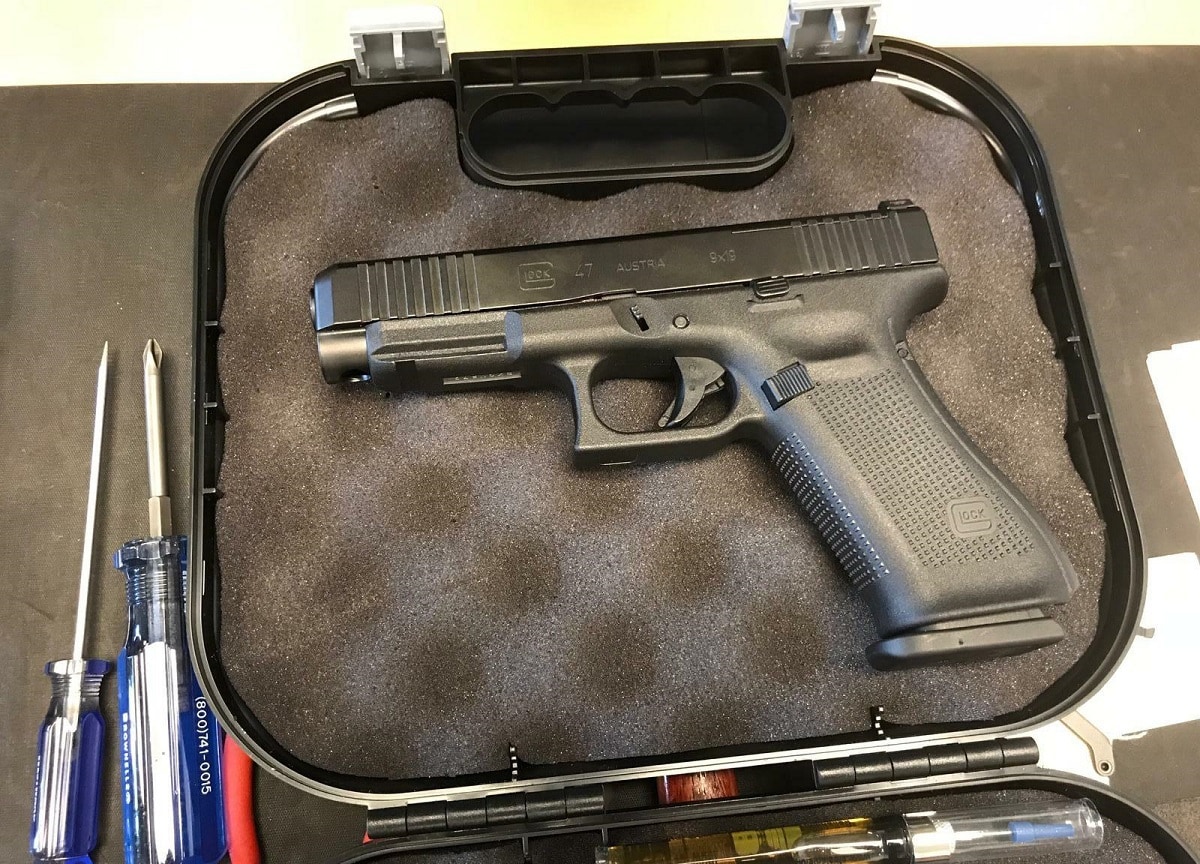 Back in 2019, the firearms commentary sphere erupted with a flurry of leaks and insider statements suggesting that Glock was on the verge of adding several new handguns to its Gen5 product line.

Glock quickly offered a clarifying statement. The Austrian firearms manufacturer is, in fact, releasing a new handgun called the Glock 47, but there’s a catch: you can’t have one.

On April 9, 2019 the U.S. Customs and Border Protection (CBP) announced an 85 million dollar contract with Glock to “provide CBP law enforcement personnel the next-generation standard duty handgun.” It was later revealed that the CPB will be phasing out its currently-employed HK P2000 pistol, chambered in .40 S&W, in favor of three Glock Gen5 9mm handguns: Glock 26, Glock 19, and mysterious Glock 47.

The Glock 47 is not a consumer product; so as not to leave any doubts on that front, the words “DHS CPB” are even engraved on the G47’s slide. Despite being listed as a new model, the G47 offers no new features– it is instead a crossover pistol that combines design elements from several of Glock’s most popular handguns, customized to fill the specific agency needs of the CPB. The G47 boasts the barrel length as the Glock 17, but will not accept a G17 slide. It is, however, compatible with 17-round capacity magazines from a variety of Glock handguns; namely, the G17, G19X, G34 and G45. As with the other two pistols in the CPB contract, the G47 comes with a flared magwell for faster reloading, AmeriGlo BOLD sights, serrations along the front and back sides of the slide for an additional tactile surface, and a Glock Marksman Barrel (GMB) that offers improved rifling.

The G47’s calling card, in Glock’s own words, is that it “incorporates a full-size slide with a G45 frame.” But an outside observer may ask, and justifiably so, why such a product had to be made in the first place. What’s the practical appeal of a handgun that adds nothing new, but merely borrows a hodgepodge of existing Gen5 design features from other Glock handguns? For consumers, the clear answer is next to none; and in fairness to Glock, the manufacturer has gone out of their way to clarify that the G47 is not a consumer product.

But consider the Glock 47 from the viewpoint of a sprawling federal agency like the CPB. The G47 is, in essence, a G17-sized handgun that is fully parts compatible with the smaller CBP G19. This gives CPB agents access to both G19 and G17-level performance, but without the need to expend department resources on separate G17 components. Not only is the CBP saving on up-front parts costs, but there are even more long-term savings to be captured by not having to operate two different maintenance and repair channels.

Having carved out a sizeable niche in the U.S. consumer handgun and local police department market since the 1980’s advent of the wildly popular G17,  the $85 million dollar CBP contract is a milestone in Glock’s concerted push into the US federal law enforcement space. Most recently, it was reported late this summer that the US Secret Service seeks to replace its .357 Sig Sauer pistols with 9mm Glock alternatives.

Mark Episkopos is a frequent contributor to The National Interest and serves as research assistant at the Center for the National Interest. Mark is also a PhD student in History at American University. This article first appeared last month.
In this article:Glock, Glock 47, Glock 47 Not For Sale, NotHome