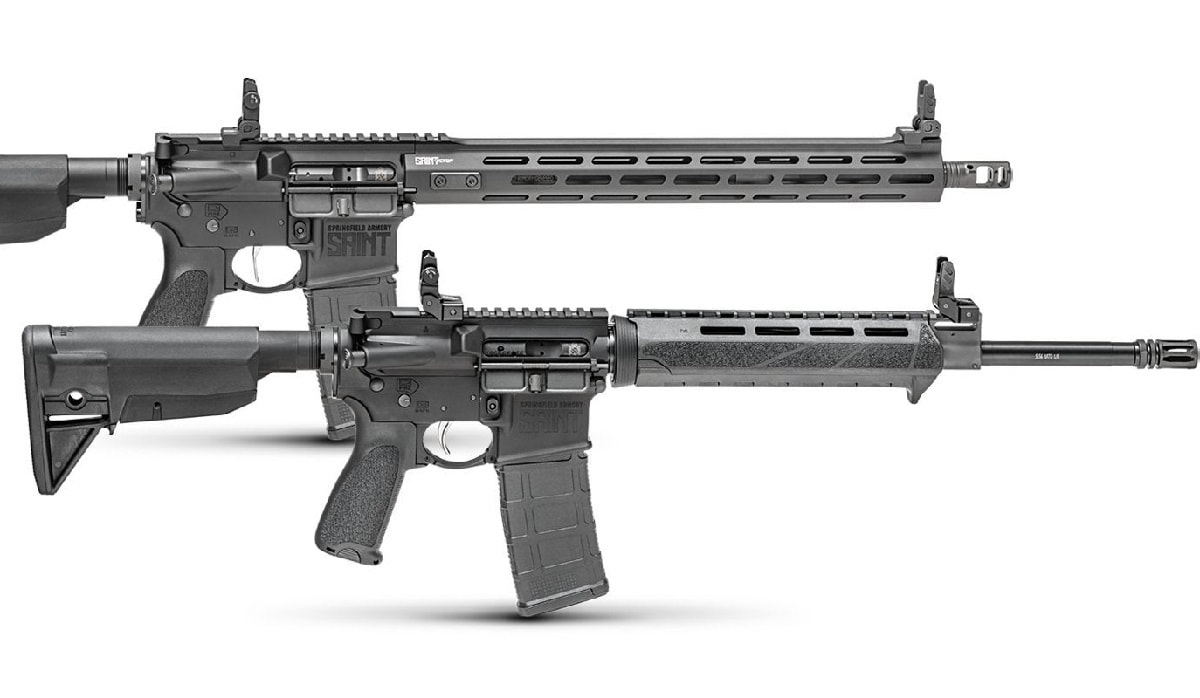 The AR-15 has long been the dominant semi-automatic rifle platform in the U.S., prized for its unparalleled modability and component diversity. The AR-15 platform’s immense popularity has spawned a fiercely competitive consumer market, with firearms manufacturers constantly searching for ways to innovate a better price-to-performance ratio. This competition has been especially good for a growing segment of first-time shoppers seeking a well-rounded, out-of-the-box AR-15 experience in the coveted sub-$1000 bracket. That is precisely the audience that Springfield, a relative newcomer to the AR-15 industry, is targeting with its recent SAINT series of AR-15’s.

Unveiled in late 2016 on the heels of Springfield’s prolonged “Defend Your Legacy” ad campaign, the SAINT is designed around a common premise for AR-15’s in this price range: reliable all-around performance at a reasonable cost. Sporting the no-frills, but prolific “black gun” aesthetic commonly associated with the AR-15 platform, the most significant aspect of the SAINT’s outward design is that it manages to clock in at a competitive 6.11 lbs. However, the SAINT achieves this impressive weight through the use of a polymer Bravo Company PKMT handguard that may incur flexing issues; meanwhile, the comparable SigM400 Tread weighs a virtually identical 7 pounds while sporting a factory-installed aluminum handguard. Those looking to take the SAINT to prolonged, high-intensity shooting sessions should also consider that the A2-style birdcage flash hider may get hot enough to melt the front of the handguard.

But neither of the issues are anywhere close to a deal-breaker for the SAINT’s intended audience, especially when considering the many positive aspects of its design. The star of the show is Springfield’s proprietary Accu-Tite tension system, an adjustable tensioning screw that is designed to eliminate wobble or looseness between the lower and upper receivers. The preinstalled Bravo Company stock also contributes to a sturdy feel, while a full-auto bolt carrier increases long-term component durability and keeps malfunction rates low. The chrome-moly barrel with Melonite finish is a welcome divergence from Mil-Spec standards, offering further durability benefits as well as improved shot stabilization under certain circumstances.

Springfield has also taken steps to address an all-too-common pitfall of budget AR-15’s: spongy triggers with long take-up. The SAINT greatly meliorates the former problems with nickel-boron coating and eliminates the latter issue entirely with a single-stage trigger that breaks as soon as sufficient pressure is applied. The SAINT’s 6.25 trigger pull weight, while relatively heavy in ideal terms, is consistent with Mil-Spec standards and quite competitive in the sub-$1000 AR-15 bracket.

As with any AR-15 style rifle, the furniture is fully replaceable. Springfield has also released eight SAINT variants over the preceding years; almost all of these, fortunately, features a free-floating aluminum handguard instead of the stock polymer design. There is now a short-barreled (SBR) variant, as well as several pistol versions. The Victor and Edge variants are made from more premium components, but are also markedly more expensive than the original SAINT.

With the SAINT, Springfield plunged headfirst into a particularly crowded segment of the AR-15 market. Though priced at the higher end of a “starter” AR-15 at an MSRP of $995, SAINT’s host of intelligent design choices and integration of key premium components make it a compelling option for any newcomer looking for a gentle introduction to the AR-15 platform.