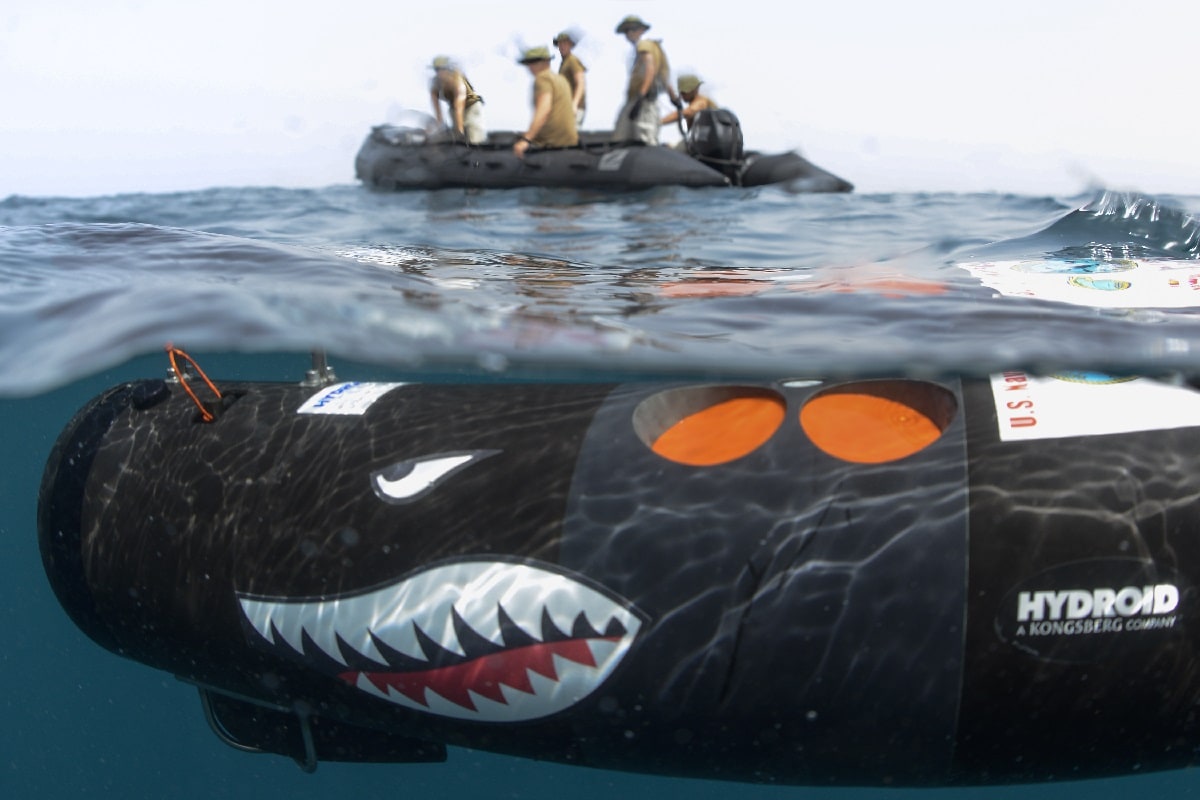 As aerographer's mates assigned to Naval Oceanography Mine Warfare Center, Stennis Space Center Mississippi stand by, an unmanned underwater vehicle leaves the surface to search for mines as part of a training exercise during the International Mine Countermeasures Exercise 13. IMCMEX includes navies from more than 40 countries whose focus is to promote regional security through mine countermeasures operations in the U.S. 5th fleet area of responsibility. (U.S. Navy photo by Mass Communication Specialist 1st Class Gary Keen/Released)

The requirements are high: it should be stealthy, unmanned, autonomous, and capable of strikes from above and below the water.

A Pre-Procurement Notice posted by the British Ministry of Defense calls for a novel naval vessel that can sail on the surface and below the surface like a submarine. Therefore, the project requirements call for the “multi-payload, low-signature, long-endurance uncrewed surface and subsurface vessel (USSV)” are significant.

Operated by the Royal Marine Commando Forces in the future, the USSV should be capable of supporting long-range operations and multiple mission types and should be able to use and deploy a variety of sensors from the surface and underwater. In addition, it should have strike capabilities that can be used while on the surface and subsurface and have a “low visual signature” when operating on the ocean surface.

The proposed vehicle’s requirements point to a platform that would be particularly well-suited to intelligence, surveillance, and reconnaissance-type missions.

Alternatively, given the vehicle’s stated high endurance, it could also potentially serve as a long-range transporter, keeping Royal Marines equipped with food and supplies.

Lastly, the containerized nature of the submarine points to ready, quick deployment from sea or port, and would be easily transportable.

One hint at what the USSV could ultimately resemble is SubSea Craft’s Victa-class USSV. The interesting-looking USSV would be able to transport 8 SCUBA-equipped combat swimmers, could sail on the surface, and flood the vehicle’s interior to travel below the water. Though this vehicle is crewed, its general hull shape and design could potentially apply to an unscrewed design.

Change is in the Air

Like the counterpart in the United States, the Royal Marines are experiencing great institutional upheaval as they pivot from a force optimized for long and larger land warfare campaigns in the Middle East to a leaner, more highly trained force capable of meeting a defeating a peer or near-peer competitor.

A recent announcement by the British Ministry of Defense elaborated, explaining that the Royal Marines would in the future be known as the Future Command Force (FCF), a persistently forward-deployed Special Operations-capable commando force.

Uncrewed Surface and Subsurface Vessels are still in their infancy. However, in the near future, any one of several advanced and promising designs could make their way into Royal Marine-turned Future Commando Force hands. In any case, both the United States Marines and their British counterpart are investing seriously in new aquatic capabilities.

Image: As aerographer’s mates assigned to Naval Oceanography Mine Warfare Center, Stennis Space Center Mississippi stand by, an unmanned underwater vehicle leaves the surface to search for mines as part of a training exercise during the International Mine Countermeasures Exercise 13. IMCMEX includes navies from more than 40 countries whose focus is to promote regional security through mine countermeasures operations in the U.S. 5th fleet area of responsibility. (U.S. Navy photo by Mass Communication Specialist 1st Class Gary Keen/Released)