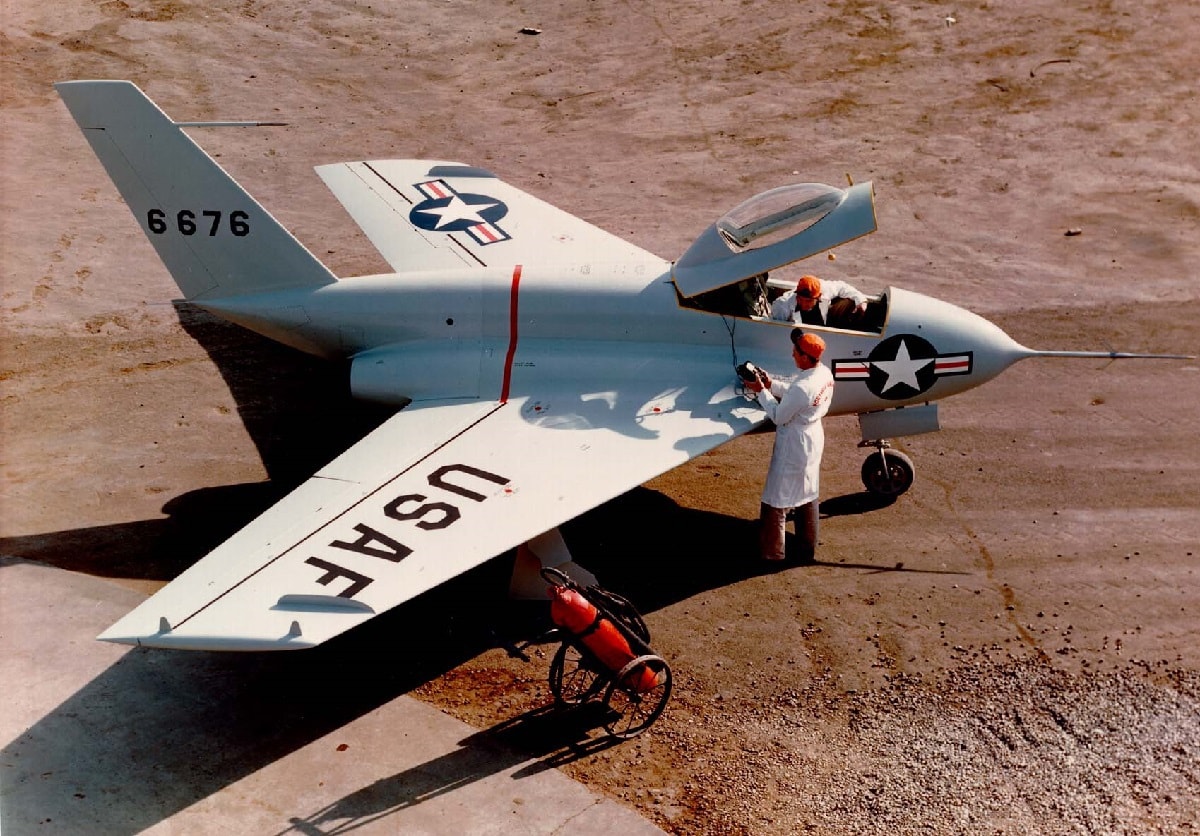 The X-4 Bantam had an odd tail. Rather than using traditional horizontal stabilizers, it had only the single vertical stabilizer. In the late 1940s, when the X-4 was being thought up, aerospace engineers were having difficulty getting airframes past the transonic speed range, which is up to and past the Mach 0.9 to Mach 1 range. Northrop thought they had a solution.

One of the proposed solutions was to eliminate the horizontal tail stabilizer all together, as it was believed the plane’s sharply swept wings would have been able to provide the necessary control surfaces for maneuverability in the air.

This type of design had been tried before, with limited success. The British-designed de Havilland DH 108 Swallow had a very similar design. Both the Swallow and the X-4 Bantam drew heavily on the Messerschmitt Me 163 Komet built by Nazi Germany near the end of World War II, though the Komet was a rocket, rather than jet-powered.

The X-4 was incredibly small. It had sufficient space for just the pilot, two compact jet engines, and amazingly only had a sufficient amount of onboard fuel for 45 minutes of flight time. The Bantam was designed to split open through the fuselage’s center to make servicing the little jet easier.

Despite the ease with which servicing was done, the first X-4 was considered so unreliable, that one of the Bantam project leaders called the plane a lemon. The second X-4, built to replace the first X-4 was more satisfactory. Its predecessor would never fly again and was instead was used to supply spare parts to the second X-4.

Unfortunately for the X-4 program, the semi-tailless design that was supposed to solve transonic stability issues was a rather poor solution. Near Mach 0.88, the X-4 became quite unstable, with an unpredictable pitch tendency that was compared to “driving on a washboard road.”

In addition, the Bantam was slightly unstable on all three flight axis, pitch, roll, and yaw with a preference for moving slightly along all three of these axises. The unstable little plane’s unfortunate flight characteristics couldn’t be improved, dooming the project. It would never fly after 1953.

By far the X-4 Bantam’s most valuable contribution to American aviation was to prove that semi-tailless aircraft designs were not ideal—indeed not feasible—in the transonic speed range with the 1950s-era technology. It wasn’t until the 1970s and 1980s that semi- or completely tailless designs were again looked at thanks to modern fly-by-wire flight control systems that rely on computer assistance to remain stable during flight.