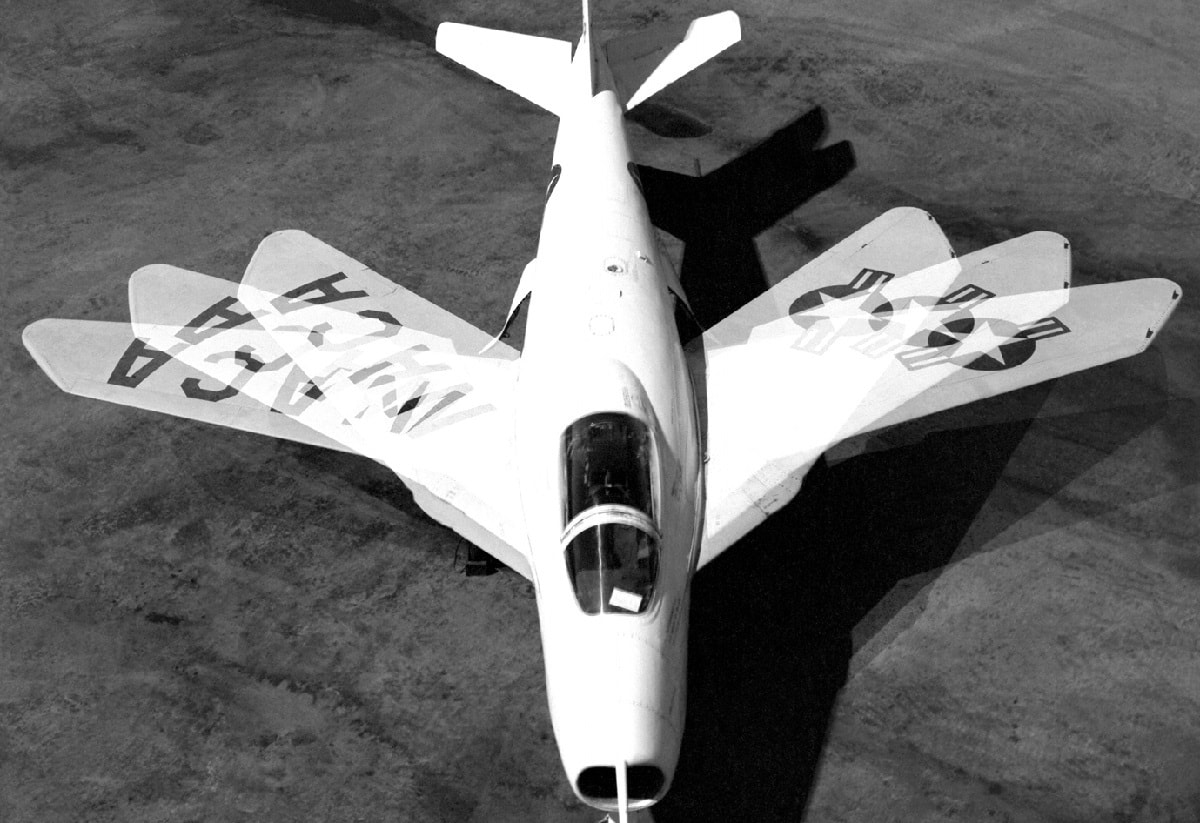 The X-5 was likely the world’s first airplane that incorporated variable-sweep wing technology. In the United States, planes with the X designation were used for research purposes only. The X planes explored the limits of flight with the intent that the data they gathered would be used to improve subsequent American airplane designs.

The X-5 was no exception. Wings aside, causal observes will notice the striking similarities between the X-5 and the German Messerschmitt P.1101, designed at the tail end of World War II by Nazi Germany. The uncanny similarity is no coincidence. Messerschmitt’s P.1101 had been captured after the war and shipped to Bell Aircraft Corporation. After extensive examination of the Messerschmitt design, engineers Bell developed the X-5.

The X-5 was quite a bit more technically complex thanks to its variable-sweep wings, which were intended to give the X-5 better handling through a range of flight speeds. When completely “unfurled” at a sixty-degree sweep, the X-5 was intended to handle better and produce more lift at lower airspeeds, like during landing or take off. When at altitude and higher speeds like cruising, the wings could be brought into a much more acute twenty-degree sweep, the intent being to make the airframe more aerodynamic.

Unfortunately, the X-5 did not function as intended. The X-5 was quite unstable and did not have positive flight characteristics. One of the two prototypes built suffered a catastrophic crash and the death of the pilot after entering an unrecoverable spin. Despite the accident, the other X-5 prototype would stay in service with the Air Force for several more years and is currently on display in Dayton Ohio at the city’s Air Force Museum.

Lessons learned from the X-5 design proved to be useful to both the United States Air Force, and to several other country’s airplane designs. One of the prominent examples of a successful swing-wing design is the venerable Grumman F-14 Tomcat, which first flew in the early 1970s.

The Tomcat proved to be a very successful air superiority and interceptor aircraft. Though it was retired from American service in 2006, Tomcats still serve with the Islamic Republic of Iran’s air force, which were exported in the mid-1970s. Iran’s F-14s are nearly half a century old, a testament to their reliability and robust design.

A number of other countries developed variable-sweep airplanes, including fighters and bombers, though the design has fallen out of favor due to the added design complexity a variable-sweep airframe entails. Such designs are often heavier than less complex swept wings, somewhat degrading the performance of variable-sweep designs. The X-5 was a pioneer nonetheless.