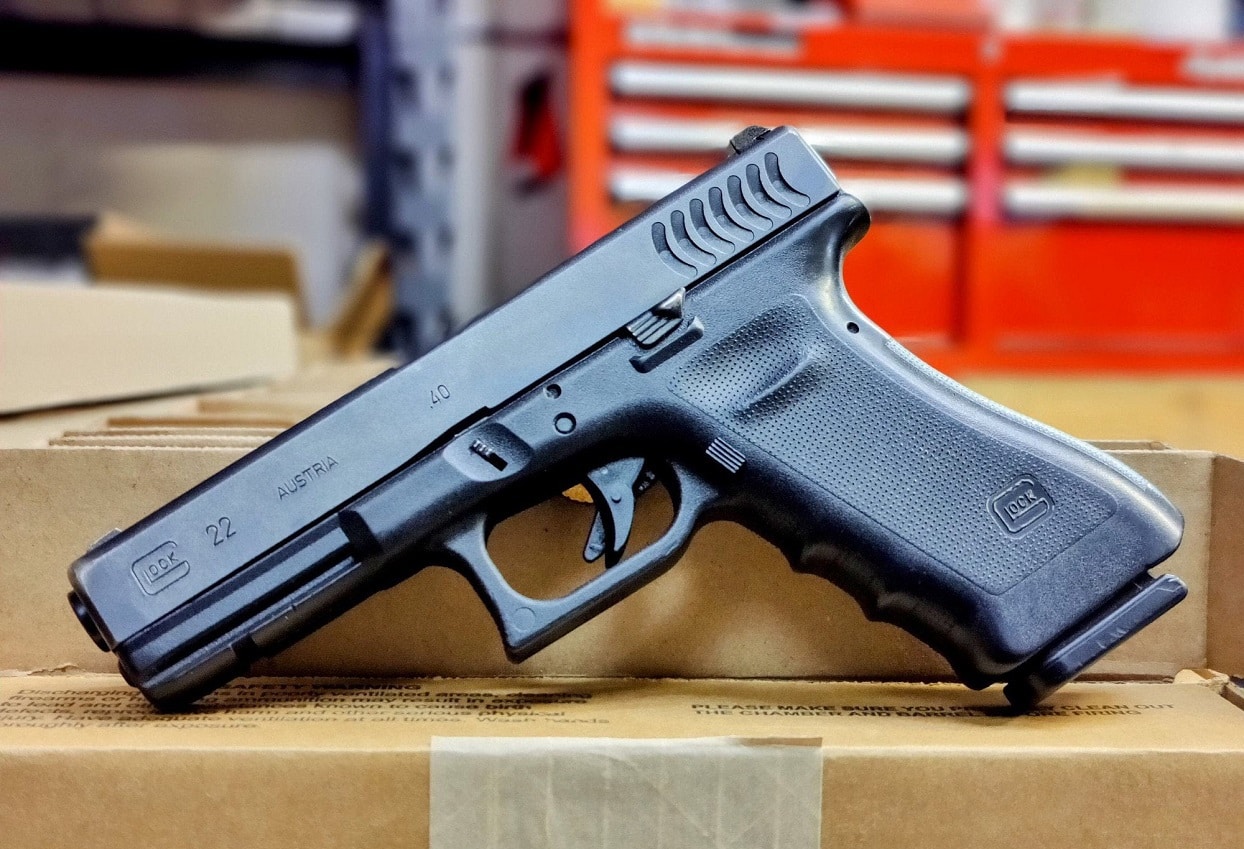 American law enforcement faces a unique challenge: keeping the peace in a country with an estimated three hundred million guns in circulation. Although the overwhelming majority are owned by law-abiding citizens, a not-inconsiderable number are owned by criminals. When carrying a duty weapon, that it is comfortable and capable of matching the firepower of the majority of criminals is a key considerations. Any 5 best guns for police list must consider these concepts.

Approximately 93 percent of gun homicides in the United States are committed with handguns. Concealable and intimidating, handguns are an attractive choice for criminals. As a result, it is rare that a law enforcement officer needs more than a handgun to equal the firepower of criminals, although the 7 percent of gun homicides committed with rifles and shotguns shows a need for police to also have long guns available and at the ready. With that in mind, here are five guns well suited for police, including handguns, rifles and shotguns.

Originally developed to fulfill a pistol requirement for the Austrian Army, the Glock 17 became a worldwide phenomenon, winning fans with armed forces, police organizations, and gun enthusiasts everywhere. The G17 was one of the first “Wonder Nines,” high-capacity nine-millimeter pistols that carried fifteen or more rounds of ammunition in a double-stack magazine. The Glock 22 is the 17’s cousin, modified to carry fifteen rounds of .40 caliber ammunition—and still weighing just over thirty-two ounces, making it comfortable to carry all day. The gun achieves this by using a metal slide but a polymer frame, saving weight. The G22 is used by several law enforcement agencies, including the U.S. Marshals, the Drug Enforcement Agency and the FBI.

One of the very first Glock variants was the Glock 21. The G21 is essentially the exact same pistol as the Glock 17, only scaled up to accept the .45 ACP round. The Glock 21 can carry ten rounds of .45 ACP ammunition, two rounds more than the dominant .45 ACP platform for the past century, the 1911A1 series of pistols. At thirty-eight ounces loaded, the Glock 21 weighs ten ounces less than a 1911A1 pistol. This is primarily due to the use of a polymer frame and simplicity of design, which includes fewer steel parts. Although the Glock 21 has a lighter recoil, it is still very acceptable and similar to the heavier 1911A1. It is also considerably easier to maintain than John Browning’s 107-year-old design. The G21 is a useful option for police who want a heavier round but an ammo magazine that allows for a greater margin of error.

A rise in gun violence during the 1990s, and a handful of incidents in which law enforcement armed with revolvers were outgunned by better-armed criminals, led to the widespread adoption of semiautomatic handguns. One of those adopted by police across the United States was the Sig Sauer P226. The P226 was developed to replace the M1911A1 in U.S. military service, but while the Beretta Model 92 won the contract, the former handgun went on to win several high-profile police contracts, including the New York and San Francisco police departments, Texas Rangers, Michigan State Police and the Ohio State Highway Patrol. The P226 also features a decocking mechanism to lower the hammer, and a manual safety.

For decades the most popular long gun carried by police was the pump-action shotgun. Stored in a patrol car, the shotgun gave police the ability to overmatch the firepower of one or more criminals armed with handguns, or face down a riot or mob with a fearsome amount of firepower. Introduced in 1950, the Remington 870 may be sixty-eight years old but is still one of the leading-edge shotgun designs. Available in a dizzying array of variants, the most popular police version is the riot version, with a five-round internal magazine and an eighteen- or twenty-inch barrel. The 870 enjoys strong aftermarket support with a wide variety of chokes, lights, lasers and other accessories to tune the shotgun to a police department’s precise needs.

An increasing number of police departments are arming their patrol units with AR-15 platform rifles. Designed by Eugene Stoner in the early 1960s, Colt sold a fully automatic version of the rifle known as the M-16 to the U.S. Air Force and later U.S. Army. The basic pattern of the M-16 persists to this day in the M-4A1 carbine, M-16A4 rifles and specialized rifles such as the M110 sniper rifle. At the same time, civilian use of the AR-15 surged with the sunsetting of the federal assault-weapons ban. The widespread use of AR rifles lowered costs, making them more affordable to police departments. Many departments use actual M-16s declared excess defense articles by the Pentagon, and released to law enforcement under the “1033 program.” An AR-15 with a thirty-round magazine provides a considerable amount of firepower for a police officer waiting for backup to arrive, and an offensive weapon for ending active-shooter situations.