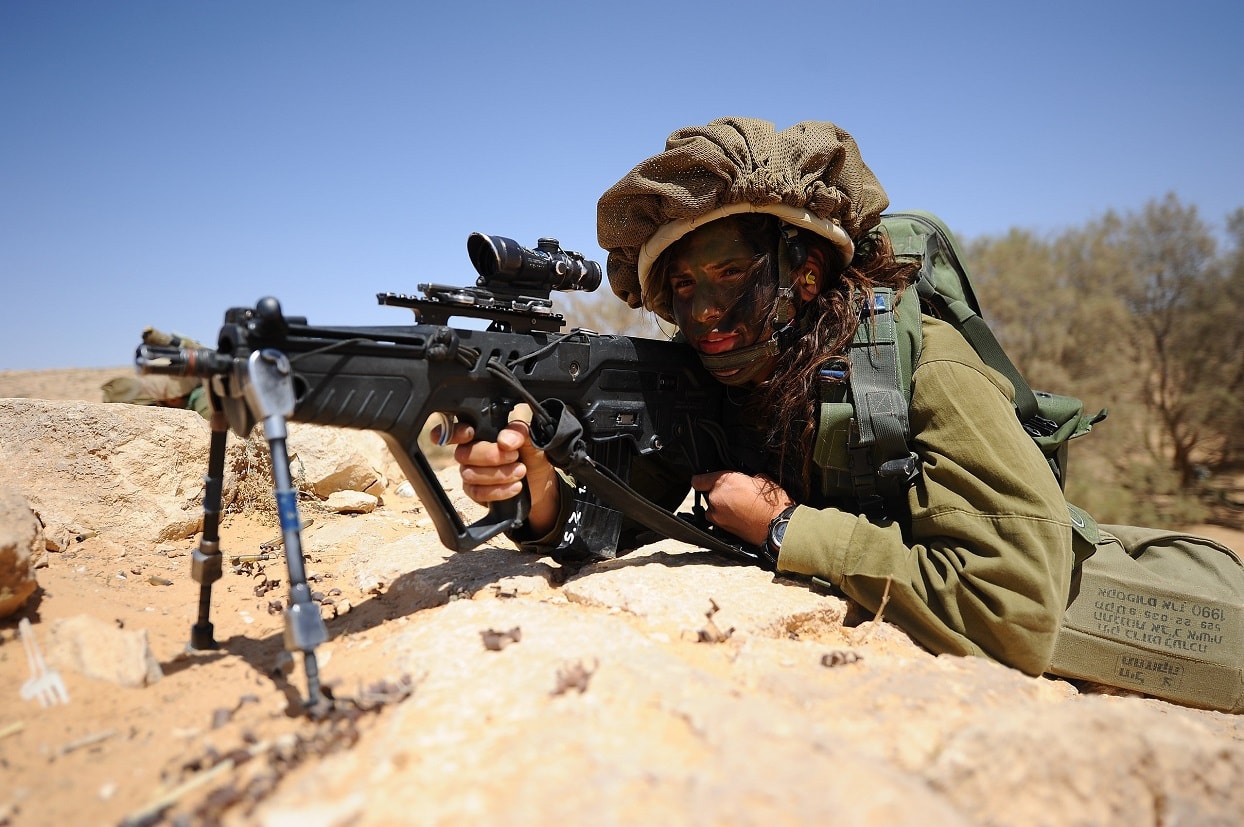 Much of Israel’s history has, for better or worse, been written with guns. From the 1948 War of Independence to today, Israeli forces have used firearms to defend the state or its interests on almost yearly basis. Images of Israeli forces rushing the West Bank in 1967 or escorting rescued hostages from Entebbe are synonymous with the Jewish State, and some of Israel’s weapons have become quite famous in their own right. Here are five of Israel’s deadliest, and most famous firearms.

In the early years, Israel had little industrial capacity and many countries refused to sell arms to it. As a result, Israel was forced to start up its own arms industry from virtually nothing. Lt. Uziel Gal, an Israeli of German descent, patented a new machine gun that would go on to arm the Israel Defense Forces (IDF). The compact “Uzi” was a simple blowback machine gun with a twenty-five or thirty-two-round magazine seated in the pistol grip. The cocking lever resided on top, and it had simple iron sights. The Uzi was cheap and inexpensive to manufacture, and fired 9mm ammunition at a rate of 600 rounds per minute. In addition to Israel, the Uzi was also adopted by Japan, Germany, Belgium, Peru and Brazil.

The early IDF was forced to rely on a mixed bag of infantry rifles, from modern weapons to bolt action rifles. This logistical nightmare was eliminated with the adoption of the FN FAL battle rifle. Adopted in 1955, the rifles were quickly put to use in the 1956 war, then the Six Day War, the War of Attrition and the 1973 Yom Kippur War. The FAL was a hefty weapon; made of steel and wood it tipped the scales at nine pounds. The rifle used a twenty round 7.62mm box magazine. The FAL’s 7.62mm round had the range to be useful in arid environments, but the forty-inch long rifle was not suitable for indoor or close-quarter use—hence the need for the Uzi. The FAL had a cyclic rate of fire of 650 to 700 rounds per minute.

A major contribution to Israeli small-arms firepower was the adoption of the Belgian FN MAG machine gun. This belt fed machine gun, chambered in 7.62mm, was introduced into IDF service in the mid-1960s. The MAG is actually very similar to the U.S. Army’s Browning Automatic Rifle of World War II, with the exception of its link-fed ammunition system and and bottom receiver locking. IDF soldiers who carried the MAG were known as “MAGists” strained under the weight of the machine guns, which weighed nearly twenty-four pounds unloaded, but could lay down enormous amounts of suppressive fire. The ability to suppress larger Arab units was often a key factor in Israeli victories over numerically superior forces.

First issued to the troops in 1973, the Galil was the country’s first indigenously produced assault rifle. Designed to replace the FN-FAL battle rifle as the standard weapon of Israeli infantry, the Galil was chambered for the lighter 5.56mm round first seen in Israeli M-16s. The rifle shares many features with the AK-47—of which Israeli had captured many—including the gas piston operating system and even the manner of inserting ammunition magazine. It even looks like a modernized version of the Kalashnikov. Improvements over the AK included a thirty-five-round magazine and bottle opener built into the bottom of the hand guard. Unlike many assault rifles, the Galil came from the factory equipped with a folding wire stock.

Israel’s second-generation indigenous assault weapon and current IDF issue, the Tavor is in some ways a clean design break from the AK and M16-pattern rifles. The Tavor is a bullpup pattern rifle, with the magazine inserted into the stock behind the trigger group, which reduces the overall length of the rifle at the cost of a fixed length of pull. The bullpup configuration allows the Tavor to use a eighteen-inch rifle barrel—longer than the barrel of the U.S. Marines’ M27 Infantry Automatic Rifle—on a twenty-eight-inch long rifle. In large part manufactured from polymers, the Tavor is light at just over seven pounds. Internally, however, the rifle still has some Kalashnikov DNA, using the same long stroke piston system found in the AK-47 and Galil. The Tavor is fully ambidextrous, an important concern for bullpup rifles, with the ejection port and fire selection switch capable of being moved to the left or right.

Kyle Mizokami is a defense and national-security writer based in San Francisco who has appeared in the Diplomat, Foreign Policy, War is Boring and the Daily Beast. In 2009, he cofounded the defense and security blog Japan Security Watch. You can follow him on Twitter: @KyleMizokami.