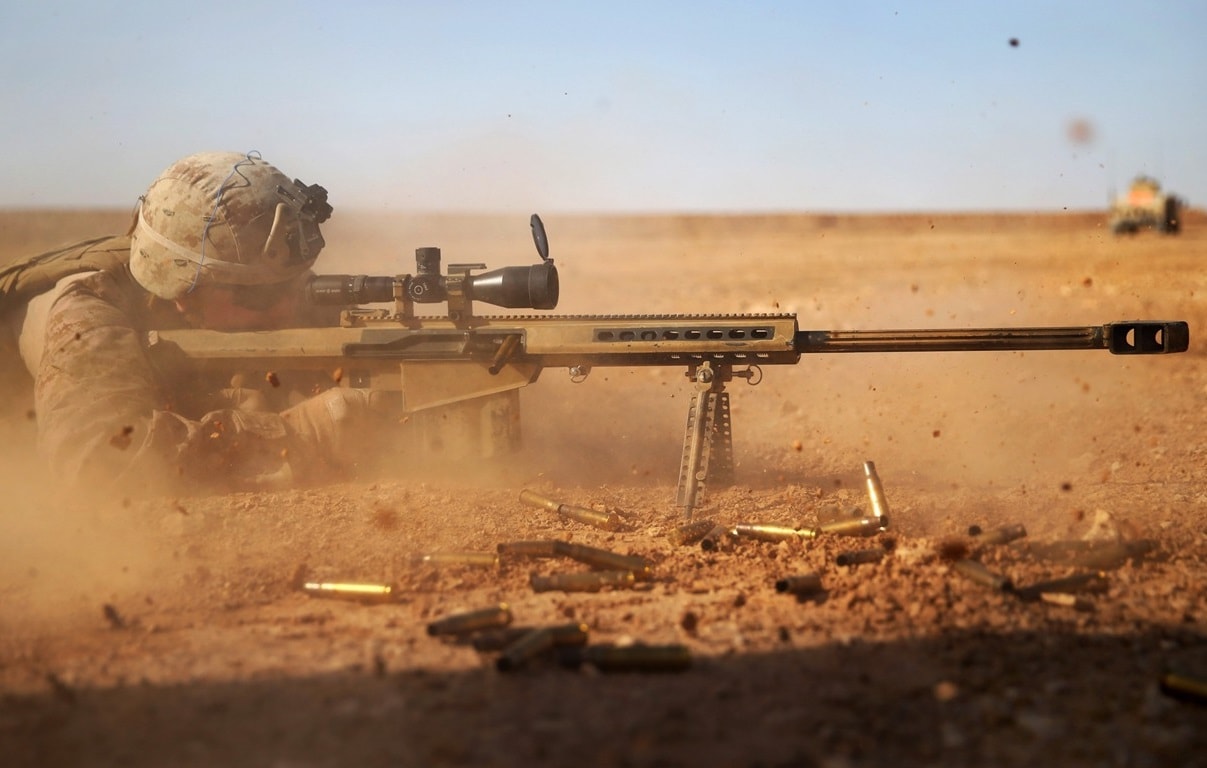 The sniper, a soldier trained in precision, long-range fire, is one of the most feared opponents on the battlefield. Snipers can make their presence felt far beyond a typical soldier’s assault rifle, cutting down enemy leaders, radio and heavy weapons operators, and damaging enemy equipment at considerable distances. This requires a weapon and optic capable of extreme accuracy, typically no more than half-an-inch of deviation per 100 yards. Here are five of the most common—and effective—sniper rifles.

The M40A5 is the latest in a long line of M40 sniper rifles used by the U.S. Marine Corps. The M40 series is a highly modified Remington 700 hunting rifle, chambered in .308 Winchester/7.62x51mm NATO. The A5 model comes equipped with a custom, 1–12 twist twenty-five-inch Schneider barrel. The action and barrel are mated to a McMillan A4 stock. The rifle is topped off with a Schmidt and Bender Police Marksman II 4-16x50mm rifle scope on a thirty minute-of-angle base designed to stretch the legs of the .308 round to a maximum 1,000 yards.

The U.S. Army’s M24 Sniper Weapons System (SWS) dates back to 1988, when it replaced the older M21 sniper rifle. Like the M40 series, the M24 is based on the commercial Remington 700 hunting rifle and chambered in .308 Winchester/7.62x51mm NATO. The M24 features a custom-made twenty-four-inch Remington barrel and uses a Leupold Mark IV M3 fixed 10x scope.

Another common feature of a sniper rifle is a so-called free floating barrel. A free floating barrel is a barrel that, with the exception of where the barrel mates up to the rifle action, does not make any other contact with the stock. This prevents unwanted pressure, which may affect accuracy, from being put on the rifle. The M24’s barrel is fully free-floated and minimally touches the HS Precision stock.

The sniper rifle of the UK Armed Forces, the L115A3 sniper rifle in use by the British Army, Royal Air Force and Royal Marines. The L115A3 is an adaptation of the Accuracy International Arctic Warfare Super Magnum rifle. Like the M40 and M24, the L115A3 is a bolt action rifle, but unlike the American rifles it is chambered in .338 Lapua with a five-round box magazine. The rifle optic is a Schmidt and Bender 5-25x56mm scope.

Sniper rifles need to shoot great distances to kill targets that believe themselves invulnerable to enemy fire. The heavier .338 Lapua round gives the L115A3 a maximum range of 1,600 yards, 60 percent greater than the .308 round of the M24 and M40A5. This was used to great effect in 2009, when a British Army sniper serving with the Household Cavalry Regiment neutralized a Taliban machine gun position at 2,700 yards with his L115A3. Cpl. Craig Harrison took three shots, fatally wounding two Taliban fighters and destroying their PKM machine gun.

Although the idea of a .50 caliber sniper rifle is not new—legendary Marine Corps sniper Carlos Hathcock famously made a long-range shot from a scoped M2 Browning machine gun in the Vietnam War—purpose-built .50 caliber sniper rifles were unheard of until the 1980s. Barrett Firearms invented the M82 anti-material rifle, which fires the exact same .50 BMG cartridge used in the heavy machine gun. Today the M82 is used by armies worldwide, from the United States to Ukraine. The M82 is equipped with a twenty-inch barrel and weighs a hefty 29.7 pounds. While powerful and capable of hitting targets at considerable distances, the .50 BMG round tends to rapidly lose accuracy after 900 yards.

Sniper rifles are useful not just against human targets, but are used to destroy communications equipment, vulnerable supply targets and even disable armored vehicles. The Barrett M82’s big .50 caliber round is particularly useful in this regard, as it only drops below supersonic speeds at 1,700 yards while still hitting with the force of 1,800 foot pounds.

The standard heavy sniper rifle of the People’s Liberation Army, the Zijiang M99 is a semi-automatic rifle similar to the Barrett M82. The M99 differs in being chambered for the 12.7x108mm Soviet cartridge and using a gas impingement operating system similar to that used by the M16 and M4 carbine family of weapons. The twenty-six pound rifle takes a ten-round magazine and is reportedly capable of accuracy to within 1.6 minutes of angle.

Sniper rifles are a choice weapon for insurgents and guerrillas, as they are a natural asymmetric weapon against conventional forces. The M99 sniper rifle has mysteriously showed up in the hands of rebels in the Syrian Civil War, where it has proven effective against Syrian Arab Army forces. The weapons are thought to have come from Sudan by way of Qatar.