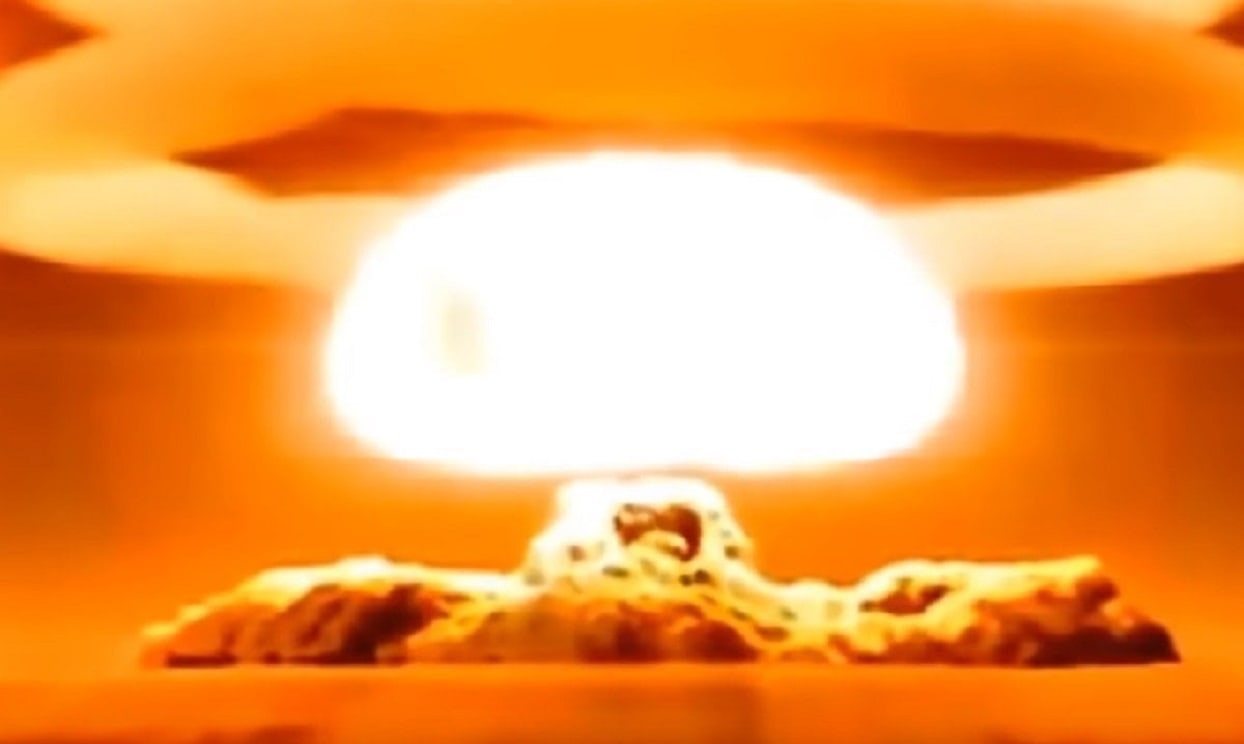 Biggest Nuclear Bomb Ever Tested, a Short History: After the Soviet Union tested the Tsar Bomba in 1961—the highest-yield nuclear device in history—the White House issued the following statement.

“Fear is the oldest weapon in history. Throughout the life of mankind, it has been the resort of those who could not hope to prevail by reason and persuasion. It will be repelled today, as it has been repelled in the past—not only the steadfastness of free men but by the power of the arms which men will use to defend their freedom.”

Tsar Bomba: The Biggest Nuclear Bomb Ever to Drop

Footage of that terrible test has been classified—until now thanks to a recently-uploaded video.

The video is an incredible piece of documentary footage. The video shows both the initial assembly of the enormous bomb, over six feet in diameter and about 60,000 pounds or over 27,000 kilograms, and the bomb’s ultimate explosion over the large Novaya Zemlya island in Russia’s far north.

The Biggest Nuclear Bomb Ever: Bombs Away

The enormous bomb was delivered by a specially modified Tu-95 bomber which had its bomb bay doors removed and replaced by larger, more robust doors. The Tu-95 also had its fuel tanks removed to increase the bomber’s payload capacity.

In a nod to pilot safety, the bomb was equipped with a giant parachute that would slow its descent in an effort to give the crew to fly to safety. The delivery plane and an observation plane were painted anti-flash white to try and minimize damage to the airframe due to the intense light that the explosion would generate. Despite these precautionary measures, the fate of the pilots was far from certain—they were given just a 50-50 chance of surviving the explosion.

But the pilots did survive. Though far enough away from the epicenter of the blast, their bomber lost about 1,000 meters in altitude after getting caught in the shockwave. Shortly after the explosion, a column of smoke and ash rose nearly forty miles into the sky. Richter scales around the world registered a 5.0 earthquake coming from the epicenter. Soldiers as far away as Norway could see the flash of the explosion, and radioactive fallout from the blast was widespread.

One of the camera operators in the observation plane gave the following hair-raising impression of the awesome explosion:

“The clouds beneath the aircraft and in the distance were lit up by the powerful flash. The sea of light spread under the hatch and even clouds began to glow and became transparent. At that moment, our aircraft emerged from between two cloud layers and down below in the gap a huge bright orange ball was emerging. The ball was powerful and arrogant like Jupiter. Slowly and silently it crept upwards…. Having broken through the thick layer of clouds it kept growing. It seemed to suck the whole earth into it. The spectacle was fantastic, unreal, supernatural.”

The Biggest Nuclear Bomb Ever Was Never Used in a War, or Put in Production…

Diplomatic fallout following the explosion was significant, especially from the United States and Scandinavian countries near the blast. Ultimately, it didn’t matter—the Tsar Bomba was much too large to ever be practical. City-sized targets in the United States were just too far away for Soviet bombers to reach without extensive refueling support and modifications to airframes to carry and drop such massive payloads.

Still, the Tsar Bomba did achieve one strategic objective for Moscow: shocking and surprising the North Atlantic Treaty Organization—and helped spur the 1963 Partial Nuclear Test Ban Treaty, a moratorium on nuclear tests underwater, in space, and in the atmosphere. Thankfully the biggest nuclear bomb ever was never put into production.