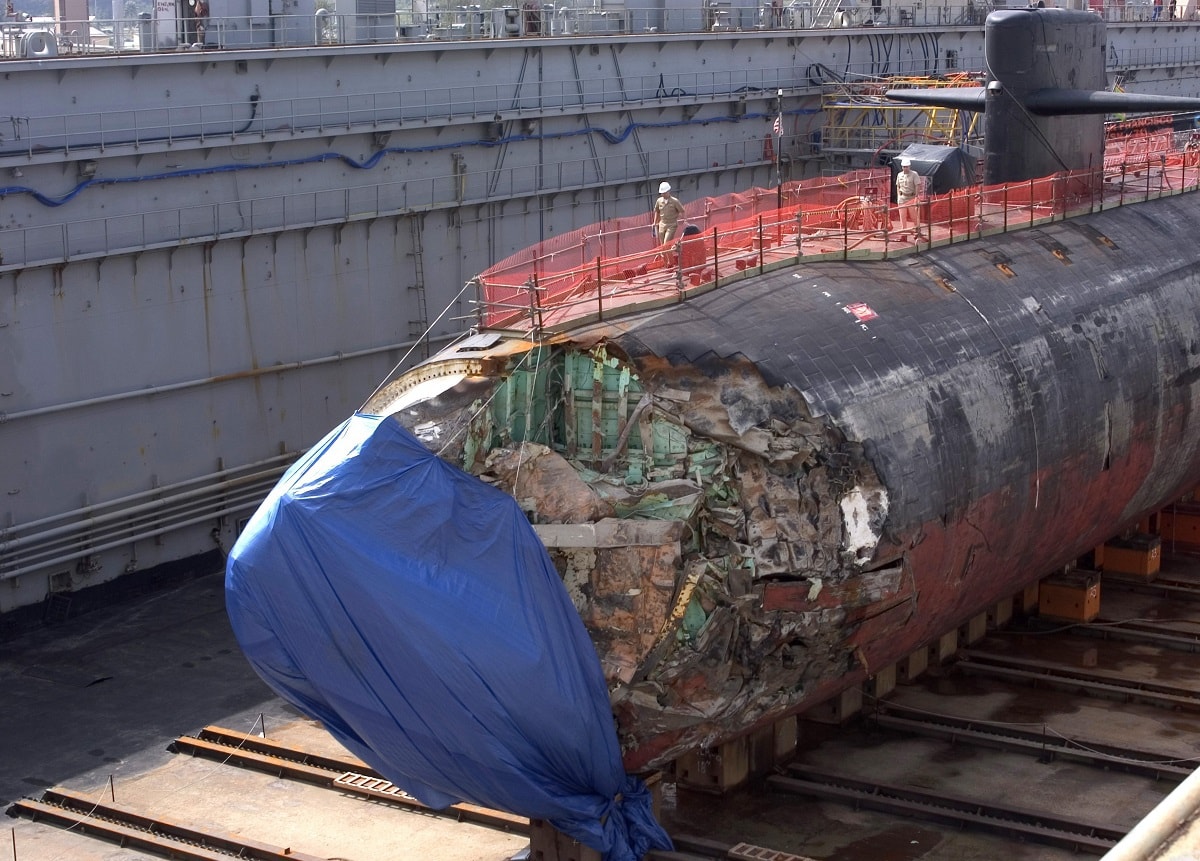 In 2005, a U.S. Navy attack submarine collided head-on with an undersea mountain at more than thirty miles an hour. Despite the damage the ship sustained and the crew’s injuries, the USS San Francisco managed to limp to her home port of Guam on her own power. The incident was a testament to the design of the submarine and the training and professionalism of her crew.

USS San Francisco is a Los Angeles-class nuclear attack submarine. Submarine builder Newport News Shipyard began construction on her in 1977, and she was commissioned on April 24, 1981. The submarine joined the U.S. Pacific Fleet and served there throughout her career.

Like all Los Angeles subs, she displaced 6,900 tons submerged, was 362 feet long, and had a beam of 33 feet. A General Electric PWR S6G nuclear reactor provided 35 thousand shipboard horsepower, driving the submarine to a speedy 33 knots. A typical crew consisted of 129 officers and enlisted men.

On January 8, 2005, the USS San Francisco was traveling at flank (full) speed—approximately 38 miles an hour at a depth of 525 feet. She was 360 miles southeast of Guam heading to Brisbane, Australia for a liberty stop. Navigation plotted the route based on undersea maps that were generally agreed to give the most complete view of the seabed. According to The New York Times, the captain went to lunch and the navigation officer, believing it was safe to do so, dived the sub from 400 to 525 feet and accelerated to flank speed.

At approximately 11:42 local time, while transiting the Caroline Islands mountain chain, the submarine came to an abrupt—and unexpected—halt. There was a shudder and then a tremendous noise. Men throughout the ship were thrown from their stations against their surroundings. In an instant many suffered bruises, lacerations, broken bones and fractures. A chief petty officer described the scene as looking like a “slaughterhouse”, with blood running everywhere. Ninety eight crewmen were injured with one, Machinist’s Mate Second Class Joseph Allen Ashley, fatally injured.

Despite their injuries, and not having any idea what had just happened, the captain and his crew rushed to surface the boat. The crew threw the emergency blow activator, known as the “chicken switch”, that immediately blast compressed air into the San Francisco’s ballast tanks. Unknown to the crew, the impact of the explosion had punched huge holes in the forward ballast tanks. The submarine was supposed to immediately rise, but it was an agonizing thirty seconds before the sub began to surface. By 11:44 the sub had surfaced.

Damage control reported the San Francisco’s inner hull was intact, her Mk. 48 torpedoes and Tomahawk cruise missiles were unharmed, and remarkably, her nuclear reactor was completely undamaged. All alone in the Pacific, the submarine began the long trip back to Guam. The sub limped back into Apra Harbor in Guam thirty hours later on January 10th, the crews of other moored submarines manning their rails in the stricken sub’s honor. 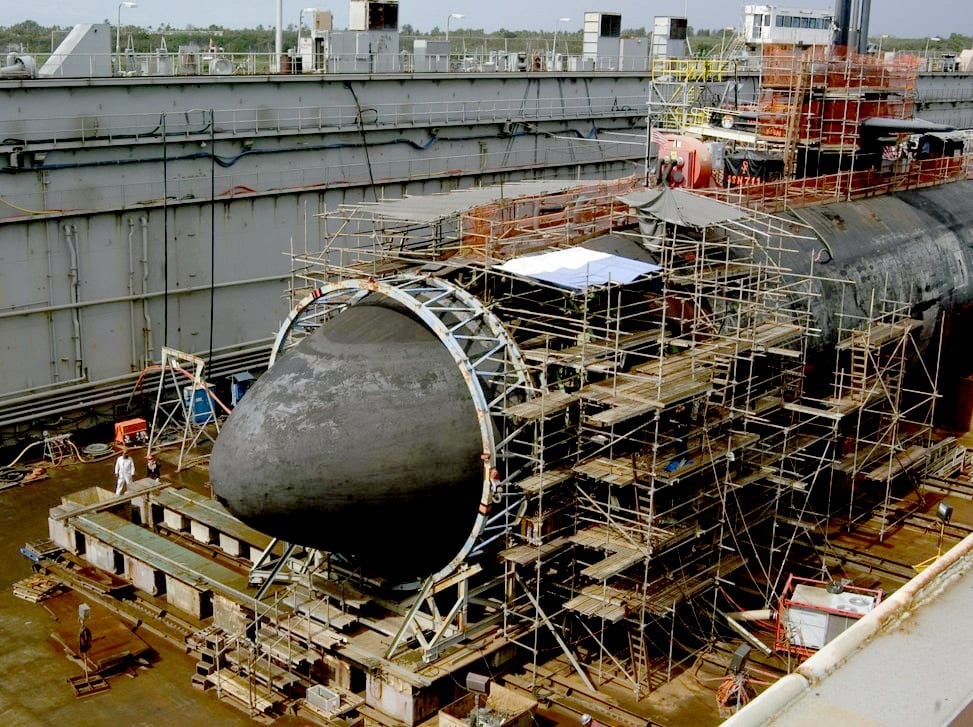 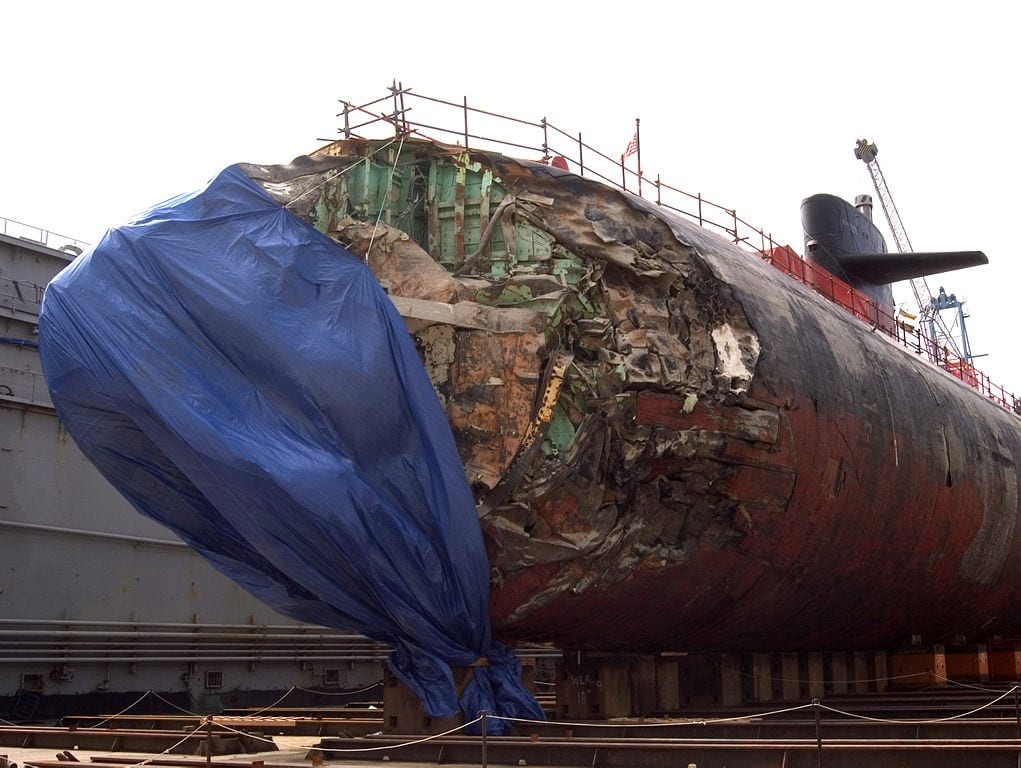 Later, an investigation would reveal the submarine had crashed into a seamount rising 6,500 feet from the ocean floor. The seamount had not appeared on the charts that San Francisco’s crew had used to plot their course, but appeared on other charts as a “potential hazard.” The hazard was reported two miles from the site of the collision and the Captain of the San Francisco has stated that had he known about it, he would have given the potential obstacle a wide berth.

The chart used by San Francisco’s crew were prepared by the Defense Mapping Agency in 1989. According to a study of the incident prepared by the University of Massachusetts in 2008, a Landsat satellite image showed a seamount in the area of the collision that rose to within one hundred feet of the surface. The Navy’s charts were not updated with the new data—according to the UMass report, the Navy believed that with the cessation of the Cold War the crash site area was not a high priority for mapping, and that priority had instead been given to the Middle East region to support the Global War on Terror.

After repairs to ensure hull integrity, San Francisco traveled under her own power to Puget Sound, Washington. The damaged portion of the boat’s bow was removed. The bow of sister submarine USS Honolulu, soon to be retired, was removed and welded onto San Francisco. The submarine rejoined the fleet in 2009 and served for another seven years. In January, it began a two year conversion that will turn her into a permanently moored training submarine.

The heroic actions of the crew were essential to the submarine’s survival. Still, how did a submarine survive a high-speed collision with a mountain? In 1963, immediately after the loss of USS Thresher, the Navy instituted the SUBSAFE program. The goal of the program was to ensure that a submarine’s hull would retain pressure in the event of an accident and she would be able to surface. The Navy’s Nuclear Propulsion Program made safe, resilient nuclear reactors an absolute top priority.

If a submarine’s hull remained intact, she was able to surface and the reactor continued to operate the crew had a shot at survival. San Francisco was able to do all three. That she was able to survive was no accident but rather the culmination of decades of hard work and dedication by the U.S. submarine force.