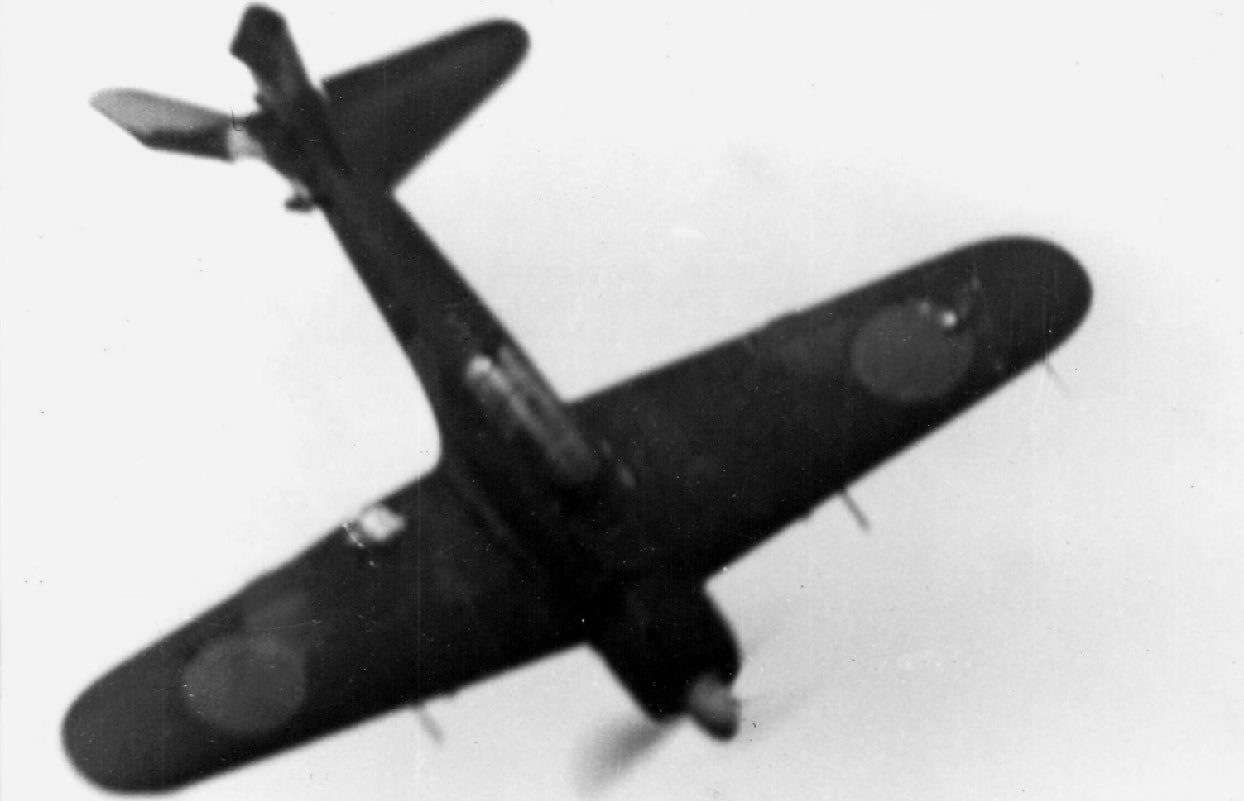 There is a reason why the destroyer USS Laffey was nicknamed “The Ship that Would Not Die.” It sounds like a compliment that any sailor would envy—until you realize how the Laffey earned it. In the space of a few minutes, the Laffey was hit by six kamikazes and four bombs. And survived.

Until that morning in 1945, the Laffey had seemed a reasonably lucky ship. A 2,200-ton Sumner-class destroyer, the ship had been commissioned in February 1944. Sent to European waters, it bombarded German defenses in Normandy on D-Day, where it took a hit from a German shell that failed to explode. Transferred to the Pacific, the destroyer supported the Philippines campaign in late 1944.

Then in April 1945, the Laffey joined the naval armada supporting the invasion of Okinawa. It’s luck was about to change.

On April 14, 1945, the Laffey was assigned to radar picket duty, a thankless and dangerous task that required the Navy’s destroyers and destroyer escorts to function as distant—and vulnerable—advance radar stations far from the defenses of the main battle fleet. Assuming its station about thirty miles north of Okinawa, on April 15 the Laffey helped repel a Japanese air attack that lost thirteen aircraft. Armed with six five-inch dual-purpose guns that could target both enemy ships and aircraft, and twelve forty-millimeter and eleven twenty-millimeter antiaircraft guns, the Laffey could put up a powerful antiaircraft barrage.

The next day would be different. A little after 8:30 a.m. on the sixteenth, the Japanese returned with fifty aircraft. First came four D3A Vals—dive bombers turned suicide bombers—that dove right for the Laffey. Two were shot down by the ship’s twenty-millimeter guns, and two more crashed into the sea. Then a D4Y Suesei was downed. A second D4Y on a bombing run was hit by a five-inch shell; the plane was destroyed, but its bomb exploded in the water alongside the ship, wounding the starboard-side gunners and setting fires that were quickly extinguished.

Then at 8:42, another Val tried to crash into the ship. It glanced off the ship and crashed into the sea. The Laffey’s communications officer described at the end of the war what happened next:

A moment later a Val exploded just off the starboard quarter, injuring several men. A plane coming in from the port bow grazed the No. 3 gun-mount and exploded near enough to put the gun out of action. Simultaneously two others approached from the starboard beam. AA fire got one of them, the second swerved off. But another one came in low on the portside. He struck the deckhouse, but kept on going, knocking out some of our guns and starting a fire in the 40 mm magazine. Within thirty seconds of each other two planes hit the after deckhouse sealing several men to their deaths in the compartments below.

More was to come. Another Val came in from astern and hit the after five-inch mount, destroying the turret. A second one hit the same spot. Then a third Val diving from astern dropped its bomb, jamming the destroyer’s rudder. Then a Val and a Suesei hit the ship.

“We still have guns that can shoot,” vowed the Laffey’s captain, Cdr. F. Julian Becton. “I’ll never abandon ship as long as a gun will fire!”

Meanwhile, a handful of U.S. fighters tried to provide some protection for the battered destroyer. FM-2 Wildcats from the escort carrier Shamrock Bay shot down several attackers, and when their ammunition was gone, maneuvered to interfere with Japanese bomb runs.

A squadron of twelve F4U Corsairs relieved the Wildcats as the Japanese redoubled their attacks. A Corsair got on the tail of a Ki-43 Oscar fighting diving on the Laffey. The ship’s guns shot down the Oscar, which hit the Laffey’s mast. In turn, the Corsair hit the ship’s radar antenna, crashing into the sea (the pilot was saved).

And still the kamikazes came. A Val dropped a bomb that exploded off the port side. A bomb from another Val landed on a forty-millimeter gun mount and killed the gunners. A Corsair attacked two Oscars, shot down one and was then shot down by the other, which in turn was downed by the Laffey’s guns. The five-inch guns destroyed another Val, and a Corsair splashed a Suesei.

Finally, the attacks stopped. The exhausted crew could draw a breath, but only for a moment until they assessed the damage. Their ship was barely afloat. Out of a crew of 336, the Laffey had suffered thirty-two dead and seventy-one wounded. Accounts differ as to whether the Laffey was hit by five kamikazes or seven, though there is agreement about the four bombs. Whatever the true number, it was way more than any two-thousand-ton tin can could be expected to survive.

Yet survive the Laffey did, though under tow. The ship made it back to Okinawa, then on to Saipan and Pearl Harbor before entering drydock in Seattle on May 24. After repairs were completed, the ship arrived in San Diego to resume duty. 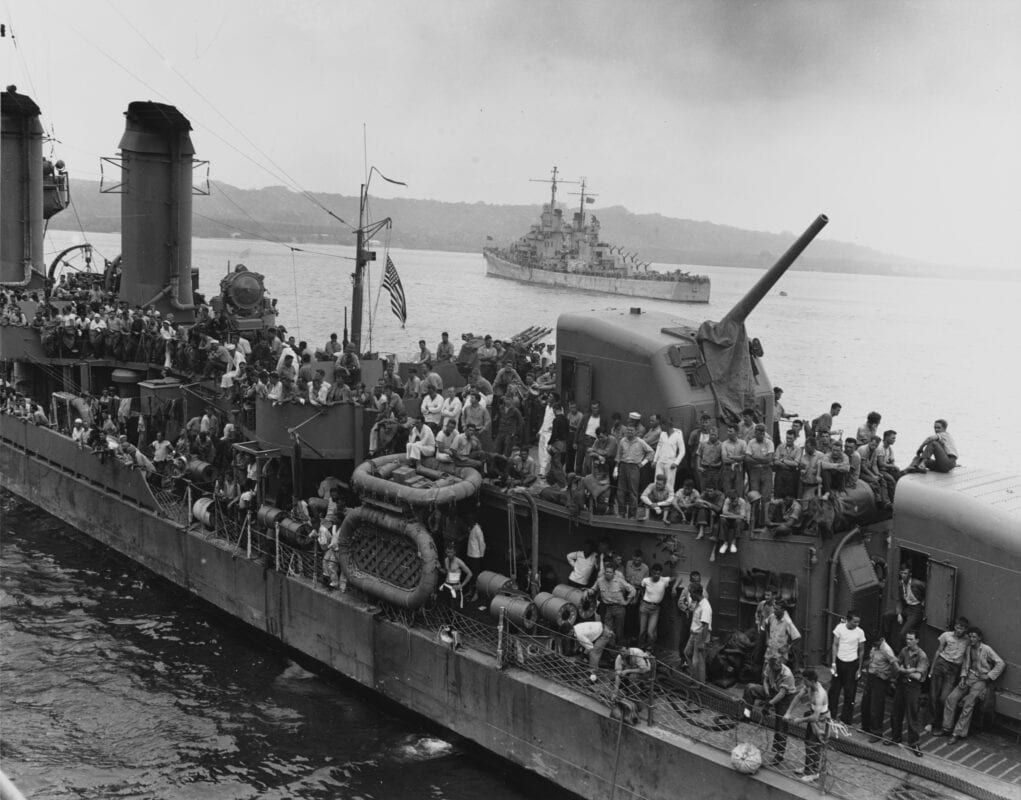 But even safely back home, the crew of the Laffey must have wondered what they had done to offend the nautical gods. Two days after reaching San Diego, the Laffey encountered a small sub patrol vessel in thick fog. “The ship got underway for exercises but collided with PC-815 in a thick fog,” notes the U.S. Navy’s official history. “She rescued all but one of the PC’s crew before returning to San Diego for repairs.”

The Laffey supported the Bikini atomic tests in 1946, and went on to fire its guns at Communist shore targets in Korea. It now lives a quiet life as a museum ship outside Charleston, South Carolina.