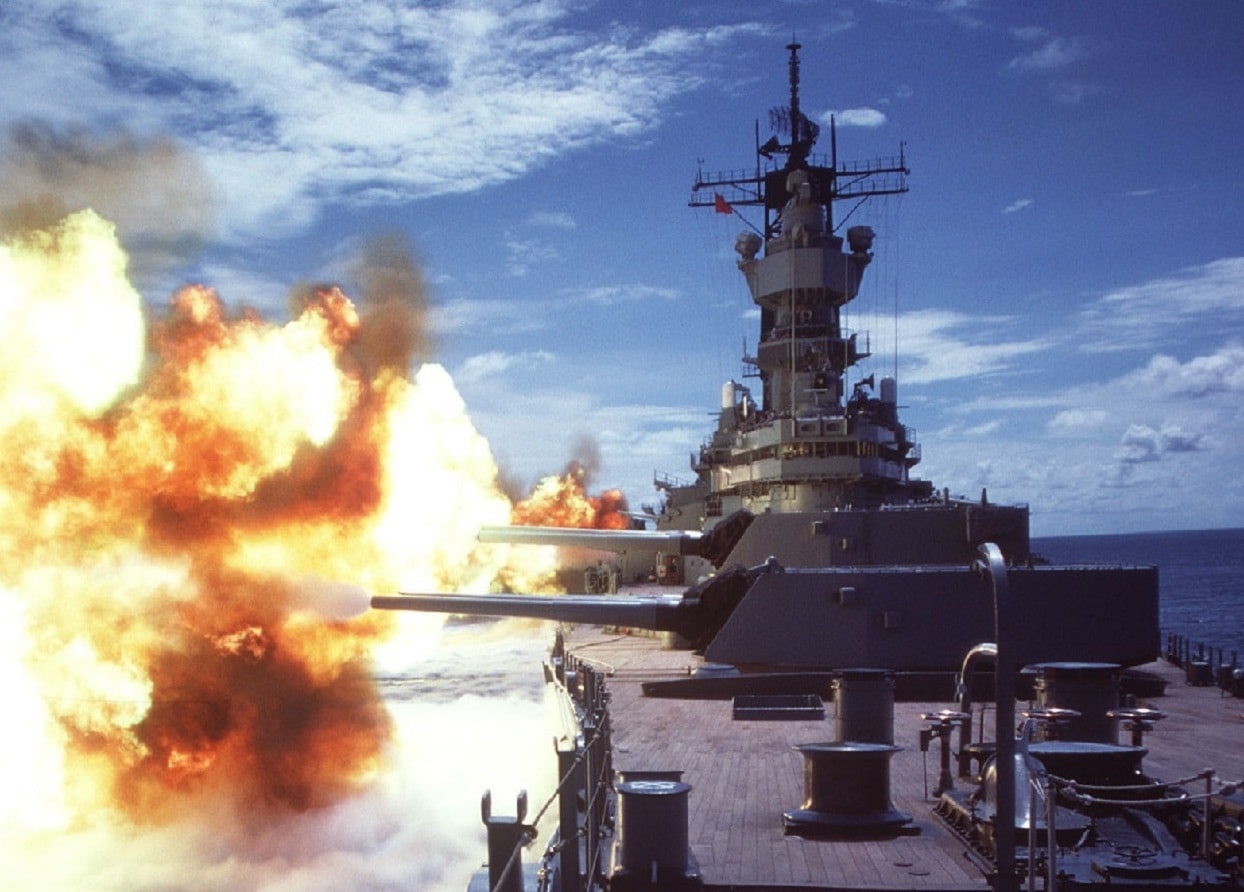 Iowa-class vs. Bismarck – The Battleship Battle That Never Happened: Despite the vast scope of the Second World War, the navies of the United States and Nazi Germany fought few, if any, direct surface engagements. By the time of America’s entry into the war the Royal Navy had already sunk or neutralized the lion’s share of Hitler’s Kriegsmarine, with only Hitler’s U-boats remaining a substantial German threat.

But what if the UK’s Royal Navy hadn’t been as successful as it was, and the U.S. was forced to hunt down the German Navy’s major surface combatants? What if the Iowa-class fast battleships had been sortied into the Atlantic to square off against their counterparts, the Bismarck-class battleships?

The Bismarck-class battleships were the largest surface ships built by Germany before and during the Second World War. Germany had been prohibited by the Treaty of Versailles to build warships over 10,000 tons, but the Anglo-German Naval Treaty of 1935 implicitly allowed them—though the German Navy was not to exceed thirty five percent the size of the Royal Navy.

With that restriction out of the way, Germany immediately began construction on the Bismarck-class battleships. Two ships, the Bismarck and Tirpitz, were planned. The ships were 821 feet long and displaced up to 50,000 tons fully loaded. Twelve high-pressure boilers powered three turbines, giving the ship a top speed of 30.1 knots. Three FuMo-23 search radars could detect surface targets at more than thirteen miles.

The Bismarck class had eight fifteen-inch guns, each capable of hurling an armor piercing, capped round up to 21.75 miles. The 1,764-pound killer shell traveled at 2,960 feet per second out the bore, faster than the bullet of a high-powered rifle. At 11 miles, it could penetrate 16.5 inches of armor, or roughly to the horizon at sea level, although it could theoretically hit targets much further.

Both battleships were heavily protected, with 12.5 inches of steel at the main belt, 8.7 inch armored bulkheads, and 14.1 inches of armor on the main gun turrets. The eight guns were installed in four turrets of two guns each. This spread the battleship’s main armament out among more protected turrets, increasing their survivability in a gunfight.

Overall, the Bismarck class was an impressive combination of firepower, speed, and protection.

The Iowa-class battleships were the most powerful battleships built for the U.S. Navy. Four ships: Iowa, New Jersey, Missouri, and Wisconsin were built. Each was approximately 861 feet long and weighed 52,000 tons. Eight water boilers connected to General Electric steam turbines propelled the battleships along at a speedy 32.5-knot maximum speed.

Iowa had nine sixteen-inch guns. Each Mark 7 gun could launch a 2,700 pound armor piercing shell 11.36 miles to penetrate 20 inches of steel plate—and even farther to a lesser penetration. In addition to search radar, the Iowas had Mk 13 fire control radars, allowing them to engage targets at extreme ranges and at night. The Mk 13 had a theoretical range out to 45 miles, and could even spot where the Iowa’s errant rounds landed, making aiming corrections much easier.

The Iowas too were heavily armored, with 12.1 inches at the main belt, 11.3-inch bulkheads, and an amazing 19.7 inches of armor on the main turrets. The ship’s vital combat information center and ammunition magazines were buried deep in their armored hulls.

Now, on to the battle. It’s 1942, and the new American battleship Iowa has been rushed into service to hunt the Bismarck. Bismarck, her sister ship Tirpitz, and other large German combatants have made the Atlantic too dangerous to send convoys across, something the United Kingdom desperately needs.

A fast battleship designed to operate alongside aircraft carriers, Iowa can cover a lot of ocean. Operating alone, she detects Bismarck—also operating alone. The duel is on.

Despite the Bismarck’s well-trained crew, good design and powerful weapons, Iowa has one technological innovation the German battlewagon doesn’t: radar-directed main guns. Iowa can fire much more accurately at longer distance targets. This allows Iowa to “out-stick” the Bismarck, which must close to within visual range for its fire control systems and procedures to work effectively. While Bismarck would avoid a nighttime duel, Iowa would welcome it—and its 2.5-knot advantage in speed means it can force a night battle if it wants to, chasing Bismarck down before sunrise.

Iowa’s combination of the Mk 13 fire control radar and Mk 7 shells means it can fire first, hit first, and hurt first. While Bismarck’s armor protection and distributed firepower could help ensure it lasts long enough above the waves to damage Iowa, it’s unlikely could save itself, damaging the American battleship enough to make it break off the attack.

The larger context of the battle—the U.S. Navy being forced to take on the German Navy—would have had serious repercussions for the Pacific theater. Germany was, after all, considered the primary threat, with Japan second and Italy third. A more powerful German Navy (or weaker Royal Navy) would have had second order consequences for the Pacific, delaying the Solomons campaign, including the invasion of Guadalcanal, the Battle of the Coral Sea, and even the Battle of Midway.

U.S. Navy planners in the Pacific, still overestimating the value of battleships, could have been less daring in their absence and fought a holding action until late 1942 or 1943. Had things been different we might think of America’s initial war against the Axis as taking place in the Atlantic and not the Pacific, the Marines hitting the beach in Iceland and not Guadalcanal, and the cataclysmic battle between the battleships Bismarck and Iowa.