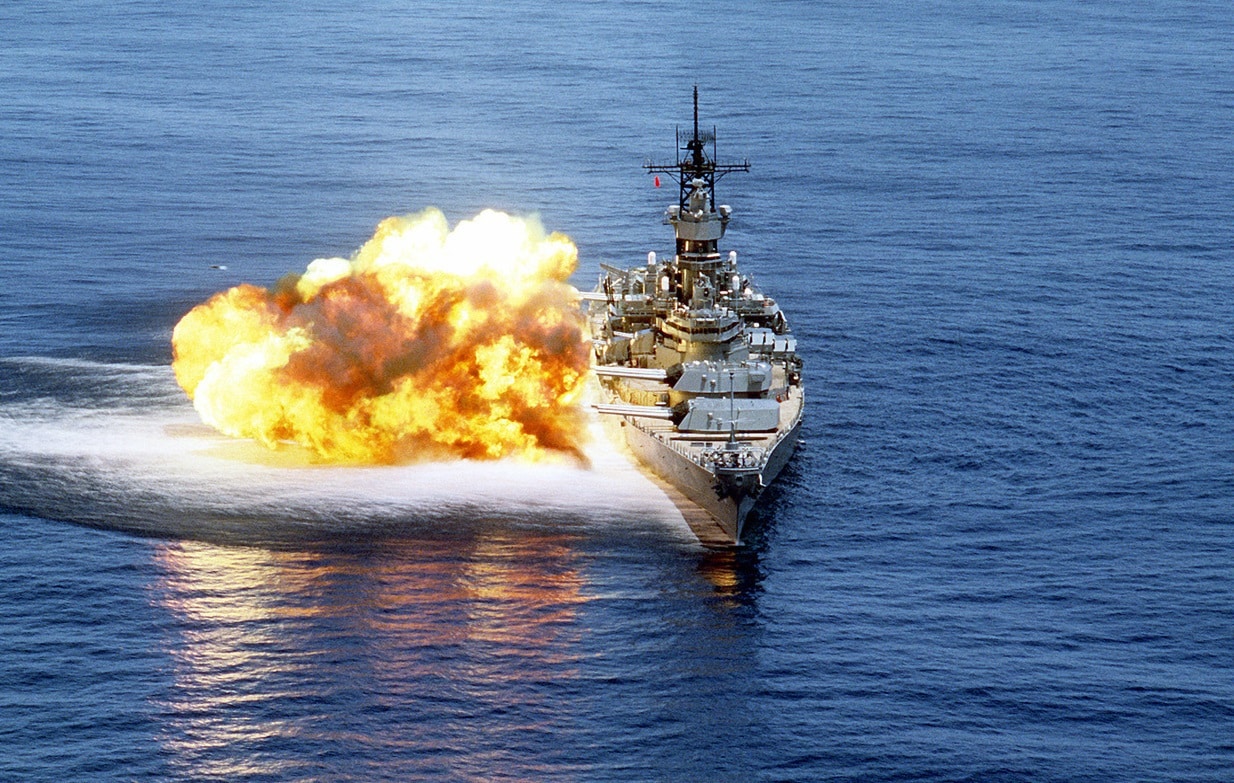 An aerial bow view of the battleship USS IOWA (BB-61) with its 15 guns (nine 16-inch and six 5-inch) firing a salvo off the starboard side.

A Battleship comeback? Battleships captivate the imagination. Before they were displaced by aircraft carriers, battleships were symbols of great-power status. Some of the most iconic were the American Iowa class, the last battleships ever built by the United States. Powerful in appearance, yet with sleek lines filled in with haze gray, the Iowa class served in World War II and were unretired three more times to serve as the U.S. Navy’s big guns. Can a battleship comeback really happen? If we brought them back today, what would they look like?

How a Battleship Comeback Could Happen

The National Defense Authorization Act for 1996, generally known as the defense budget, had a unique provision hidden inside the text: the text directed the Navy to keep at least of the four Iowa-class ships on the Naval Register in good condition, retain the logistical support to maintain battleships on active duty and keep those ships on the Register until the secretary of the navy certified that existing naval gunfire support equaled or exceeded the firepower of two battleships. Iowa and Wisconsin were finally stricken from the Register in 2006 after the secretary of the navy, citing the upcoming thirty-two Zumwalt-class destroyers, certified they were no longer needed.

Now, years later, the Navy is only getting three of the thirty-two Zumwalt destroyers, and the long-range attack projectile specifically designed for the Zumwalt’s two 155-millimeter guns is being canceled due to exorbitant costs. The Navy is again facing a naval gunfire shortfall, in addition to an antiship shortfall. Could the Iowas make yet another comeback, bolstered with new and powerful weapons?

In laying the groundwork for battleship modernizations, there are four things that must happen for any successful update.

The Iowa-class battleships were designed in the late 1930s, and a lot has happened in the last eighty years. First, the ships must be highly automated. The ships originally sailed with crews of up to 2,700 personnel, later reduced to 1,800. The U.S. Navy is no longer a draftee service, and personnel costs in the all-volunteer Navy are major expenses. Prime candidates for automation are older mechanical systems, such as the three sixteen-inch gun turrets, each of which has a crew of over a hundred, and the power plant and engineering.

Second, the battleships would return to the field just as firepower is transitioning from being gunpowder-based to electricity-based. The ship will need all the power it can get to power the new generation of weapons systems that will go onboard. A nuclear power plant would provide power in the megawatts range, while requiring fewer crew to operate it. An alternative is the electric drive system that powers the Zumwalt class, albeit on a larger scale, delivering even greater power.

Third, the battleships need to be able to sink ships at ranges of at least two hundred miles and hit land targets at eight hundred to a thousand miles. At 887 feet long, the battlewagons will be prime targets for land- and sea-based antiship missiles and must have a reasonable chance of operating from beyond their ranges. While the effective range of antiship missiles will only continue to grow, a long-distance striking capability will still be useful against other targets, including island garrisons, airbases and enemy ships.

Fourth, the battleships will be purely offensive weapons designed to attack targets on land and at sea. They will not have advanced radar systems aboard, nor will they equip the Standard family of missiles, nor will they jump on the ballistic-missile defense bandwagon. In order to justify their existence, they must be able to contribute as much offensive firepower as possible.

A reactivated battleship would not replace a carrier—the two would operate separately but symbiotically. A guided-missile battleship’s long-range firepower would suppress enemy air defenses, allowing carrier aircraft a freer hand over enemy territory. In return, carriers would provide antisubmarine and antiair cover for the battleship.

Our upgrade for the Iowa-class battleships would turn them from battleships (BBs) to guided missile battleships (BBGs). We’ll start by funding development of a sixteen-inch hypervelocity guided projectile along the lines of the HVP round currently being developed by BAE Systems. That round, for the 127-millimeter Mk. 45 gun on all Navy cruisers and destroyers and the 155-millimeter gun on the Zumwalt destroyers, will have a range of exceeding a hundred miles. How far a sixteen-inch hypervelocity shell could reach is unknown, but performance matching the 155-millimeter version doesn’t seem unreasonable.

Taking a cue from the Pentagon, making the ship’s main battery more efficient means that we can cut it. The aft sixteen-inch gun turret has to go, in order to give the ship a long-range strike capability. In its place we will put a field of 320 to 470 Mk. 41 variant vertical-launch systems that will accommodate a purely offensive loadout: Long Range Anti-Ship Missiles with a two-hundred-plus-mile range and Tactical Tomahawk missiles with a thousand-mile range. Even longer-range missiles would be welcome additions to the BBG’s new arsenal, and could even be stored in deck-mounted armored box launchers if necessary.

The remaining five-inch gun turrets on the Iowa-classes’ port and starboard sides are obsolete. The solution: ripping out the turrets and replacing them with a pair of railguns. Four railguns would increase the battleship’s firepower against land targets, helping make up for the loss of the aft sixteen-inch turret.

The BBGs would not be totally defenseless: the upgrade of the early 1980s saw four Phalanx CIWS guns installed. In their place we could install newer SeaRAM point defense missile launchers, or even defensive laser weapons in the hundred-kilowatt range, fed power from the nuclear reactors.

The BBGs will retain their helicopter landing pad. The battlewagons will rely on cruiser and destroyer escorts to fend of air and subsurface threats, and P-8 Poseidon maritime patrol aircraft, MQ-4 Triton drones and other unmanned aircraft, and submarines and unmanned underwater vehicles for targeting data. One outside possibility is the battleships being equipped with TERN tailsitter drones capable taking off and landing vertically, providing an organic, long-distance scouting capability not unlike the Vought OS2U Kingfisher seaplanes that equipped the Iowas in the 1940s.

The result of this conversion is a BBG that could sink any enemy surface action group protecting an enemy island or coastline, then strike antiaccess/area-denial targets such as antiship ballistic missiles, surface-to-air missile batteries, radars, air bases and and other enemy targets. Once it was safe enough to close within a hundred miles of the enemy coast, sixteen-inch guns with hypervelocity shells would come into play, destroying a half-dozen targets at a time with precision.

The Battleship Comeback That Will Never Happen?

The Iowa-class battleships will remain museum pieces for the foreseeable future. Still, if the will and the funding were there, there are some very interesting things that could be done with them that would neatly patch holes in the U.S. Navy’s force structure—particularly the ability to fight and sink enemy ships. While a comeback is unlikely, it’s always nice to dream.