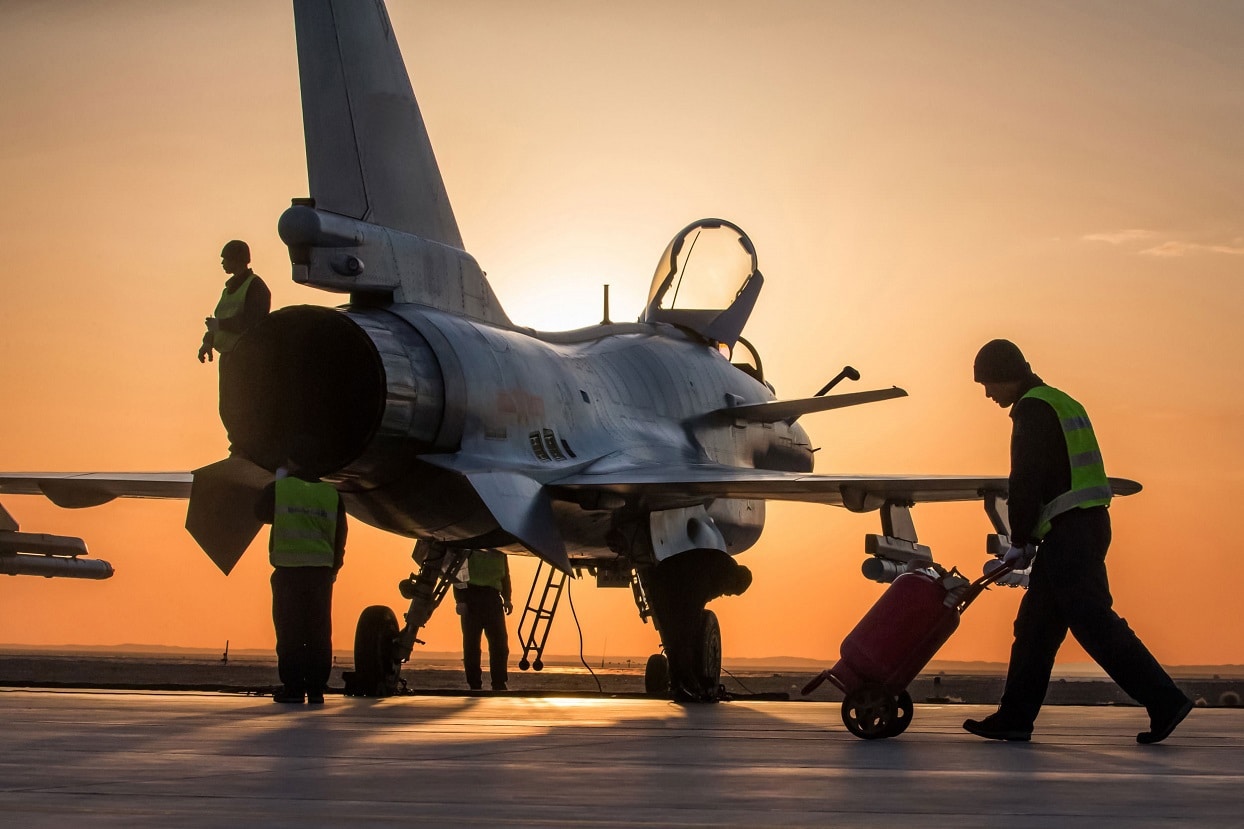 The Chinese government wants to take you into the danger zone. In 2011 Beijing released Sky Fighters, China’s answer to Top Gun. Like Top Gun, it’s about fighter pilots waging aerial war for their country.

But that’s where the comparison ends. Made by the Chinese military as domestic propaganda, Sky Fighters is possibly the worst movie with fighter planes ever made. And that’s saying a lot.

The film imitates Top Gun relentlessly in scene after scene, but in many ways it’s the American film’s exact opposite. While Top Gun is proof that a cheesy film can still be immensely enjoyable, Sky Fighters proves that a movie with fighter planes can actually be pretty awful.

Sky Fighters is a movie about the pilots of Air Division 903, a storied unit of the Chinese air force that has turned out “tens of generals” during its illustrious history. The action starts with two pilots engaged in air-to-air combat training. Yin Shang Hu, the cocky upstart, outmaneuvers his superior officer, Yue Tianlong, by using the famous Pugachev’s Cobra aerial maneuver.

The rest of the film is hard to describe, because Sky Fighters doesn’t really have a plot. It’s merely a collection of incidents that prove the superiority of the Chinese system, as advocated by Yue.

Which system? All of them.

In lieu of a plot, Sky Fighters poses a series of challenges to Yue Tianlong, each of which he excels at. One of the main themes of the film is the friction between Yue and Yin Shang Hu over 903’s training. Yue thinks they should focus on “researching and drilling,” which sounds like oil fracking, but in reality is a hallmark of socialist-style air force doctrine. His junior commander believes that practicing aerial acrobatics is better. The film implies Americans and European fighter pilots are only interested in aerobatics.

You can see where this is going.

The film constantly apes Top Gun, but if imitation is indeed the sincerest form of flattery, Sky Fighters still manages to insult the original with one poor imitation after another. In Top Gun, Tom Cruise wears a leather flight jacket while riding a Kawasaki Ninja 900 motorcycle with a “NO WIMPS” sticker plastered on the side, as Kenny Loggins howls Danger Zone and two Pratt & Whitney TF-30 turbofan engines roar. It’s cheesy, but it’s become a pop culture icon partly because it’s real.

In Sky Fighters, that scene somehow becomes an ornithologist on a cheap Suzuki bike pacing a pair of J-10 fighters. A woman sings in the background in Chinese operatic style, the jet noise barely noticeable. And instead of being filmed with real jets, the entire scene is a combination of blue screen and CGI so bad it looks like a cut scene from a Facebook game.

The boys of Division 903 fly inverted above an American F-16, just like in Top Gun. But it’s not funny, it’s lame; it’s been done before with real planes. Yue even requests to do a fly-by. But his “salute to the Motherland people” is just as tame as it sounds, nothing like Maverick’s in-your-face buzzing of the control tower.

The film does break with Top Gun in a few standout ways: the protagonist of Sky Fighters, Yue Tianlong, is about the opposite of Tom Cruise’s Maverick as one could imagine.

He doesn’t have a cool call sign, just a three-digit number. He isn’t a junior pilot with a dead father complex thumbing his nose at authority—he’s the commander of an air division. He is authority. He doesn’t seduce the beautiful blonde intelligence contractor. No, he’s married to a woman never seen outside of a military uniform. He’s not prone to unorthodox piloting, he’s a strictly by-the-book pilot.

Yeah, he’s really boring. Unlike in Top Gun, the maverick fighter pilot is the antagonist. You were looking for a rebel hero? You’re not getting one. Why? Because the Chinese government doesn’t want rebels.

Roughly two-thirds into the film it occurred to me that Yue Tianlong isn’t just the division commander: he’s a stand-in for the Chinese Communist Party. He leads the division, providing leadership and direction. He’s wise and hardworking, and when he gives instruction, people succeed.

He even plays matchmaker, and when the division deploys to Xinjiang for exercises, helpfully brings along a bag of tampons for his female airmen. That isn’t awkward at all! There’s no end to his boundless wisdom and kindness! Why would anyone find fault with his appointed rule?

The use of CGI also leads to bizarre flying antics, such as when a computer-generated J-10 fighter drifts horizontally like a race car. Planes fly in straight lines at a 10-degree angle of attack. At one point the main character tilts the nose of his plane vertically and the plane plows forward through the air, belly first, for 24 seconds. To stirring orchestra music, of course.

In another scene, Yue’s engine conks out while he’s trying to teach himself the Cobra maneuver. Yue manages to set the plane down, only to have the landing gear collapse. That’s not exactly a ringing endorsement of Chinese engineering.

The Chinese Communist Party is ever-present in the film, represented by the division’s political commissar. The commissar isn’t like some nosy, Tokarev-waving, grim-faced Marxist-Leninist fanatic in the Red Army. Instead he’s a plump, dumpy man whose broad face expresses concern at moments of key decisions. He doesn’t seem to actually do anything. He’s kind of like Counselor Troi in Star Trek: The Next Generation.

The film’s subtitles … well, if you’ve ever seen the subtitles of a bootleg Chinese movie, you know the lack of quality. Ironically, the poor translation only makes the film more enjoyable. Slightly more enjoyable.

Sky Fighters is Top Gun with the imagery preserved, but the life—and frankly any bit of joy—sucked out of it. It defies my attempts to make fun of it. Despite the occasional glimpses into real-life Chinese air force operations, it was boring. I couldn’t wait for it to end.