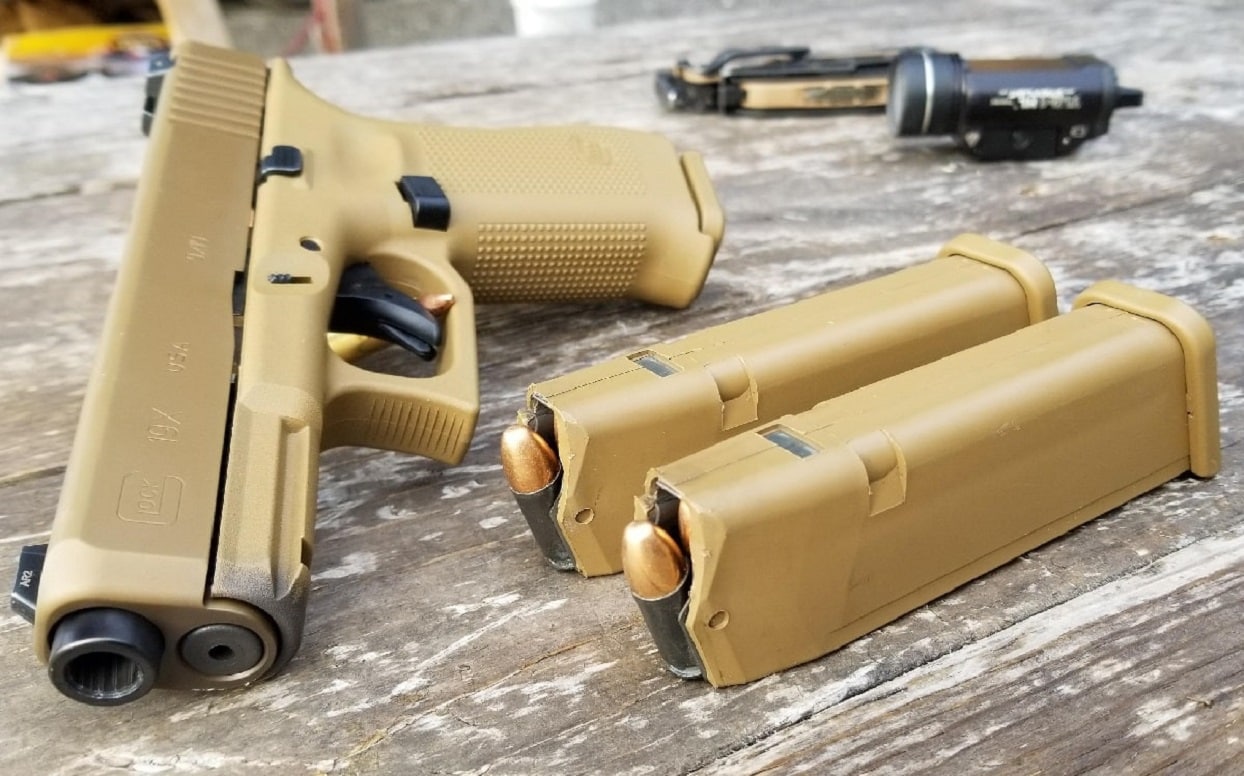 For much of the mid-twentieth century, handgun development was in a period of stagnation. The development of the semiautomatic pistol had ushered in a new weapon that, although more complex than a revolver, had a higher ammunition capacity. Quickly adopted by armies around the world, the steel-framed semiautomatic reigned for decades. Then, in the 1980s, something came along that disrupted the firearms industry: the Glock handgun. Today it’s carried by armies worldwide, from the U.S. Army Rangers to the British Armed Forces.

The story of the Glock began in February 1980, when the Austrian army was looking to replace antiquated, World War II-era Walther P-38 handguns with something new. Gaston Glock, an Austrian citizen who ran a small business producing field knives and blades for the Austrian Army, overheard a conversation between two Austrian Army colonels and learned the Army was in the process of searching for a new pistol. According to Glock: The Rise of America’s Gun, Glock asked the minister of defense whether or not his shop could compete, and the answer was, “Yes, why not?”

Glock knew nothing about handguns. He had spent two or three days in World War II as a conscript teenager in the Wehrmacht, but that had had no practical benefit for him. The machine shop owner went out and purchased a number of competing pistols, including the Italian Beretta 92F, the Swiss-German Sig Sauer P220, the Czech CZ75 and a modern version of the Walther P-38, the P-1. Glock took the weapons home and studied them, how they worked and how they were constructed. He also consulted firearms specialists, soliciting them for ideas on what they would like to see in a modern handgun.

Glock learned that the Austrian army wanted a pistol with a high ammunition capacity, more than the eight rounds of the Walther P-38. It should weigh no more than twenty-eight ounces, with a streamlined design and a consistent, light trigger pull. It should also have no more than forty parts. After a year of tinkering and product development, Glock filed for a patent for a pistol design on April 30, 1981. He delivered four test pistols the Austrian army on May 19, 1982. The resulting pistol, known as the Glock 17, swept the army’s handgun trials and was accepted for service, earning Glock a contract for twenty thousand of his new pistols.

The Glock 17 was a pistol unlike any other. Strong and light, the lower half of the pistol is a polymer frame housing a steel fire control group. The upper half of the pistol is made from a single block of steel. This use of plastics allowed Glock to keep the handgun’s weight down to twenty-three ounces—a quarter-pound less than the army requirement. Other competitors such as the Beretta 92F and the CZ75 used a steel frame. Glock simplified the design to just thirty-four parts. Longtime gun manufacturer Beretta’s 92F pistol, by comparison, had more than seventy parts.

Glock spent considerable time working on his pistol’s “pointability,” a term that describes a pistol’s natural ability to act as an extension of the shooter’s hand and eye coordination. This makes the pistol easy to aim, translating into a more user-friendly, accurate weapon. The Walther P-38, by comparison “points badly.” Glock also concentrated on making his weapon reliable over all else, and in a competition that allowed for twenty jams in ten thousand shots, his pistol only failed once.

The Glock 17 was also one of the first high-capacity pistols. The Browning Hi-Power, designed by John M. Browning himself, was one of the first high-capacity shooters and carried thirteen rounds. The Beretta 92 could carry an impressive fifteen rounds. The Glock 17, however, beat the competition, packing seventeen rounds of nine-millimeter parabellum ammunition, more than doubling the P-38’s magazine capacity.

In the intervening thirty-five years, the Glock has become the dominant handgun in a crowded field of competitors. Despite stiff competition from countries emulating his polymer design, Glock 17 handguns serve with such diverse forces as the British Armed Forces, the Swedish Armed Forces, Indian special forces, the Iraqi military, the Israeli Defense Forces and the Yemeni military. The Glock 17 outfits dozens of armies and hundreds of police forces worldwide. U.S. Army Rangers and Marine Corps Forces Special Operations Command use the compact version, the Glock 19, and U.S. Special Forces—including the shadowy Delta Force—carry the .40 Smith & Wesson–caliber Glock 22.

Gaston Glock credits his success in handgun design to his lack of knowledge about handguns. That gave him no preconceived notions about what a handgun should be, and allowed him to focus on just a handful of requirements: ease of use, simplicity and reliability. Glock didn’t try to invent a pistol that would take over the world, just win a contract for the Austrian army. The rest of the world simply decided it wanted what he was selling. Somewhere in there is a lesson for defense contractors everywhere.