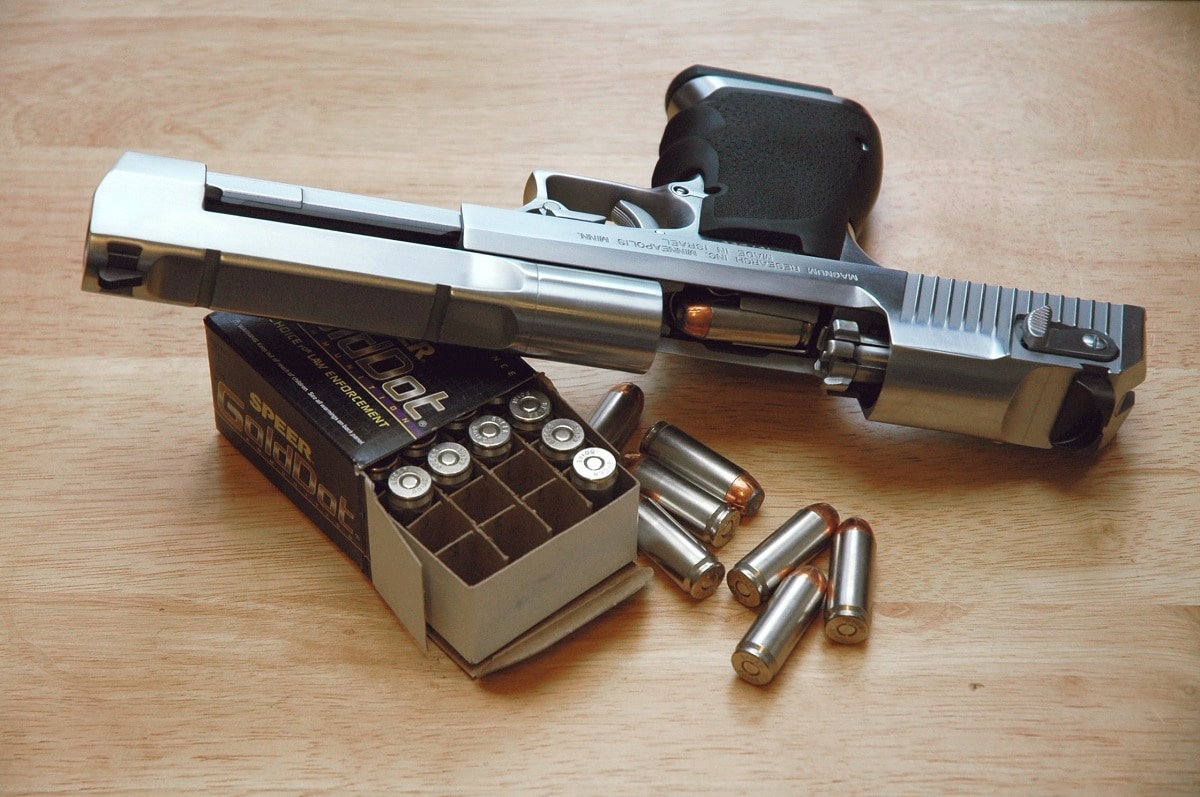 In the mid-1980s, a powerful new handgun quickly achieved gun celebrity status. The Desert Eagle was an innovative design that ported over heavy revolver rounds to the semiautomatic pistol platform. The pistol was featured in dozens of action films, and although expensive and not widely adopted by military services the Desert Eagle gained a cult following.

Traditionally, heavy bullet calibers such as .357 Magnum and .44 Magnum were exclusively used by revolvers. Revolvers, with fewer moving parts, are mechanically stronger and can withstand the pressures of heavy handgun calibers. Semiautomatic pistols, on the other hand, were limited to .45 ACP or smaller calibers. If a gun enthusiast wanted a handgun in .357 or .44 Magnum, he or she was limited entirely to revolvers.

The Desert Eagle changed all of that. First introduced in 1983, it was unlike any other pistol in common use. The bolt face, which uses multiple teeth to lock into the battery, was derived from the M-16 and AR-15 family of rifles. Unlike other pistols, the barrel was fixed in place, and rather than use a blowback system the Desert Eagle used a gas piston system derived from the Ruger Mini-14 semi-automatic rifle. This was necessary to accommodate the high chamber pressures and recoil of using heavy caliber cartridges. Traditional pistols rely on the energy from shooting a gun to drive the slide backward and cycle the action. The slide grabs the empty bullet casing and spits it out, picks up a fresh round from the magazine, and cocks the pistol.

The large-caliber rounds fired by the Desert Eagle release too much energy to make the blowback system practical (or safe), so designers turned their attention to a system where they could regulate how much of the energy was diverted to cycle the weapon. When a user pulls the Desert Eagle’s trigger, the gas system diverts some of the hot gunpowder gases from the barrel to drive a piston that cycles the action. Although common in rifles, the gas piston system was unknown among handguns mostly because it was just unnecessary. In a way, the Desert Eagle is part revolver, pistol and rifle.

The Desert Eagle’s rifle traits have the advantage of taming recoil—an important consideration for a large caliber handgun. Diverting gases softens recoil, and one well-known gun reviewer claims, “Shooting this .357 Magnum is no worse than pulling the trigger on a Glock 19.”

The handgun’s manufacturing history was tumultuous: the Desert Eagle was first manufactured by Israeli Military Industries (IMI) for the American firm Magnum Research, but in 1995 was moved stateside to Saco Defense of Maine. Production moved back to IMI and Israel in 1998 but moved back again to Magnum Research of Minnesota in 2009. Magnum Research was purchased by Kahr arms in 2010 but still produces Desert Eagles in their original facility.

The Desert Eagle was originally produced in 1985 in .357 Magnum. The .357 Magnum version features a six-inch barrel, nine-round magazine, and Weaver-style accessory rail for mounting telescopic sights and red dot optics. The Desert Eagle is nearly eleven inches long, just over six inches high, and weighs four and a half pounds unloaded—more than twice as much as a loaded Glock 17. The Desert Eagle is also manufactured in .44 Magnum, which holds eight rounds and is dimensionally identical than the .357 Magnum version, and .50 Action Express, which also has the same dimensions but holds seven rounds. 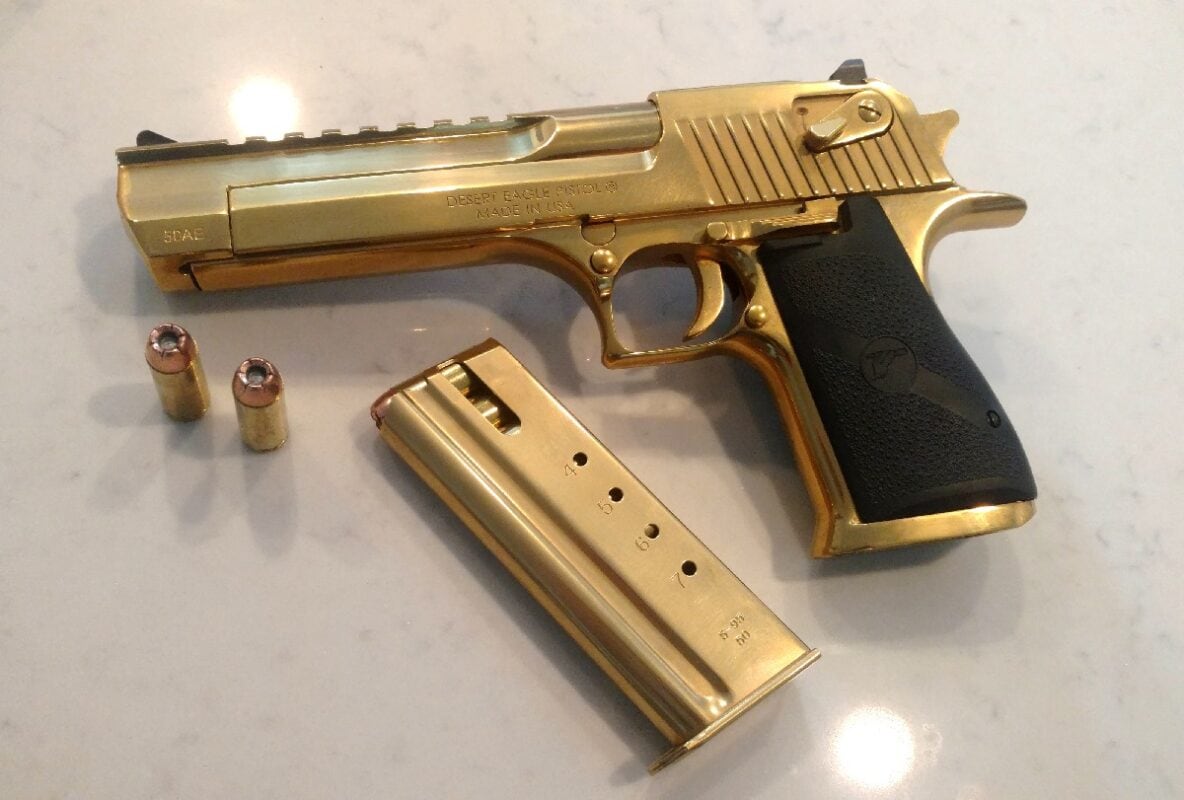 The Desert Eagle was never officially picked up by any major military or police force and is primarily the realm of gun enthusiasts and hunters looking for a show-stopping sidearm. In case of a rifle malfunction, the Desert Eagle’s hitting power could spell the difference between a successful hunt or serious injury. The gun is also extremely popular in Hollywood, appearing in dozens of movies and television shows. It is also a popular sidearm in today’s video games, where it has earned the nickname “Deagle.”

The Desert Eagle is a celebrity gun with limited practical utility. That hasn’t stopped it from being enormously popular, and the Desert Eagle’s large frame has become synonymous with the idea of a big handgun. The pistol with the innards of a rifle won’t be going away any time soon.