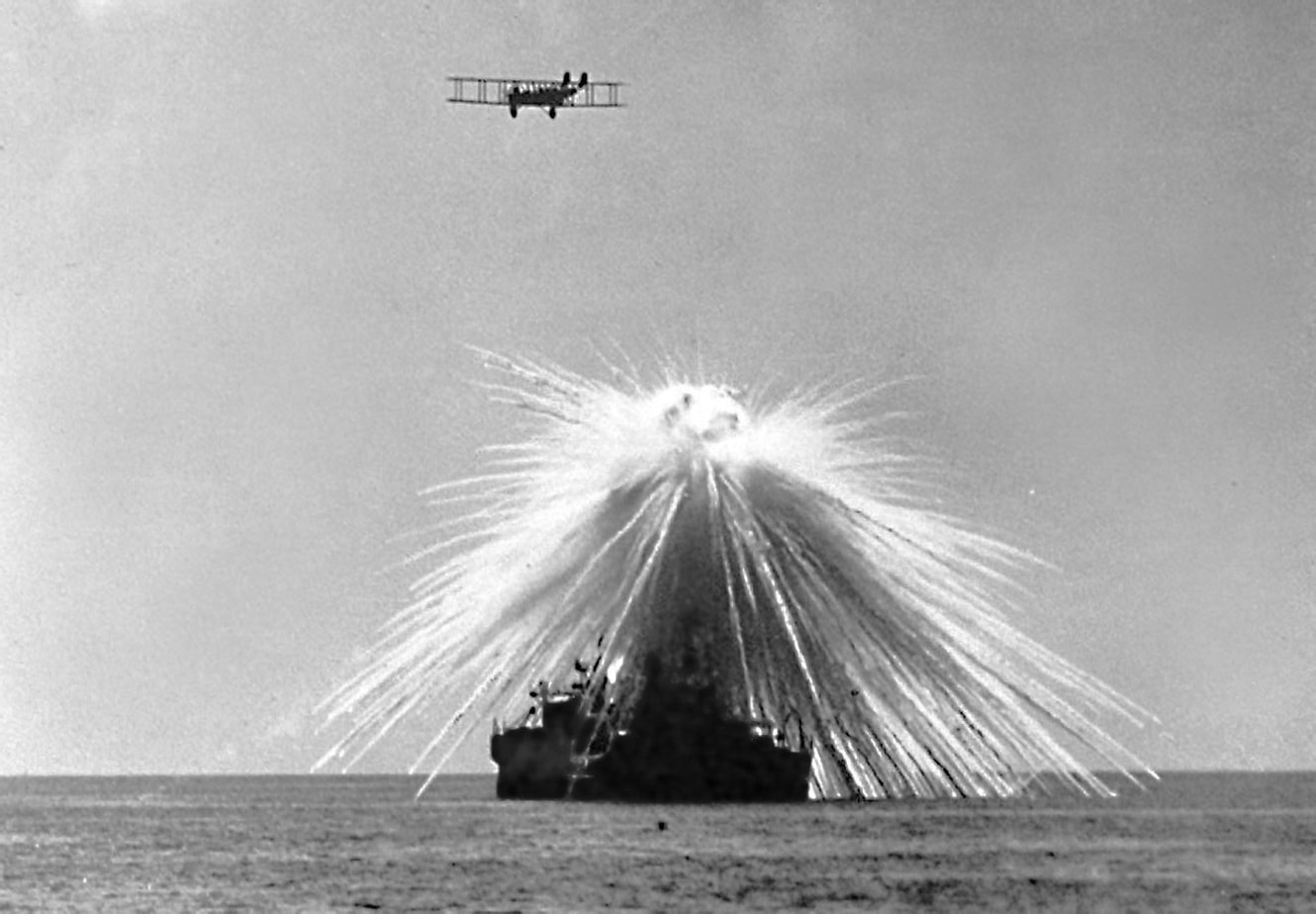 In 1921, a controversial military exercise demonstrated to the world the power of aerial warfare in the naval domain. The live-fire exercise off the coast of Virginia, in which several ships were sunk, accurately predicted air power’s dominance over traditional battleship-dominant navies in the Second World War nearly twenty years later.

William “Billy” Mitchell was a U.S. Army general widely regarded as the father of the modern U.S. Air Force. Mitchell commanded all American aviation units on the Western Front during World War I. He was a firm believer in the superiority of air power over all else. Mitchell planned and directed one of the first large-scale air offensives ever attempted during the successful battle of St. Mihiel. Mitchell’s air armada for the campaign included 1,481 Allied aircraft.

After the war. Mitchell became assistant chief of the Army Air Service, which would later become the Army Air Corps. He believed that very soon the airpower would become the dominant power in warfare, and that the United States would inevitably find itself under threat of aerial attack. As Mitchell himself said, “Nothing can stop the attack of aircraft except other aircraft.”

Mitchell believed that aviation—which could respond to both air and naval threats—was much better suited to protecting the country’s coastline than battleships. Mitchell was fond of stating that a thousand bombers could be purchased for the cost of a single battleship, and told a House subcommittee that properly equipped, an Air Service could sink any battleship in existence.

In one of the first interservice rivalries of the American armed forces, he charged that money for battleships in the postwar period was wasteful and misuse of defense dollars. For a U.S. Navy that still believed in the power of big-gun battleships, these were fighting words. Mitchell set the Army Air Service and the Navy on a collision course, which was somewhat ironic considering his real goal was a separate, third service.

Mitchell repeatedly demanded realistic tests to prove or disprove his theories, claiming that he could sink ships under “war conditions.” U.S. naval aviators had already sunk the elderly battleship USS Indiana in November 1920, and the Navy had come away with the conclusion that “the entire experiment pointed to the improbability of a modern battleship being either destroyed or completely put out of action by aerial bombs.”

Unfortunately for the Navy, word leaked that it had used dummy bombs filled with sand during the exercise, later sinking it with high explosives where the bombs had hit. The Indiana test invalidated, the stage was set for a new series of tests to prove Mitchell’s theories. Secretary of War Newton Baker and Secretary of the Navy Josephus Daniels agreed the following February to a series of joint Army-Navy exercises, nicknamed Project B, in which Air Service bombers would attack and attempt to sink obsolete ships.

Mitchell formed a new air unit, the First Provisional Air Brigade, based at Langley Field, Virginia (now Langley Air Force Base). The brigade consisted of 150 aircraft and one thousand Air Service personnel from across the country. Pilots quickly trained to sink ships, aided by Russian Imperial Naval Service veteran Alexander de Seversky, who had conducted air attacks on German destroyers during World War I. Seversky educated American pilots in the art of the “near miss,” in which a bomb dropped by an aircraft very close to a warship still causes hull damage by generating an underwater pressure wave. Army ordnance engineers also produced a two-thousand-pound aerial bomb that was thought necessary to sink battleship-sized targets.

The Project B tests were held in the Chesapeake Bay in July 1921. Airplanes of the First Brigade sank a captured German destroyer and then a an armored light cruiser. Next was the German battleship Ostfriesland, considered “unsinkable” due to its extensive compartmentalization. After a day of 230- and 600-pound bombs dropped by Marine, Navy, and Army aircraft, the battleship settled three feet by the stern with a five-degree list to port. Ostfriesland, it turned out, was not unsinkable from the air.

The next day, five Martin NBS-1 bombers each dropped a 1,100-pound bomb on the German battleship, scoring three more hits and causing the ship to sink even further. NBS-1 bombers returned with their new battleship-killer bombs. Of six bombs, three scored near misses powerful enough to rip hull plates off. Twenty-two minutes after the attack, Ostfriesland turned turtle and sank under the waves.

Ostfriesland wasn’t the only battlewagon sunk by American airpower during this test period. The battleship Alabama was sunk in September, and the Virginia and New Jersey were sunk in 1923. The latter were both sunk within less than an hour.

The exercises weren’t perfect. Mitchell had claimed he could sink battleships under “war conditions,” but the battleships had been stationary and not underway. They were also not shooting back with antiaircraft fire and were obviously lacking damage-control parties.

Regardless, the validity of Mitchell’s claims were self-evident—every ship had been sunk. While this did not wean the Navy off expensive battleships in the short term, it did expose their vulnerability from the air, and the Navy did seemingly hedge its bets later on by producing the Lexington-class aircraft carriers. The exercises also undoubtedly increased the Army Air Service’s influence, which set the stage for the larger Army Air Corps of the Second World War.

Like any good military exercise pushing the boundaries of contemporary technology, Project B was a window into the future. While it’s difficult to measure exactly how much influence the Project B tests had on the outcome of the Second World War, that they mirrored many of the war’s future engagements—the attack on Pearl Harbor, the sinkings of HMS Prince of Wales and HMS Repulse, and scores of smaller air/naval engagements—is unmistakeable. Project B was a harbinger of the violence to come.