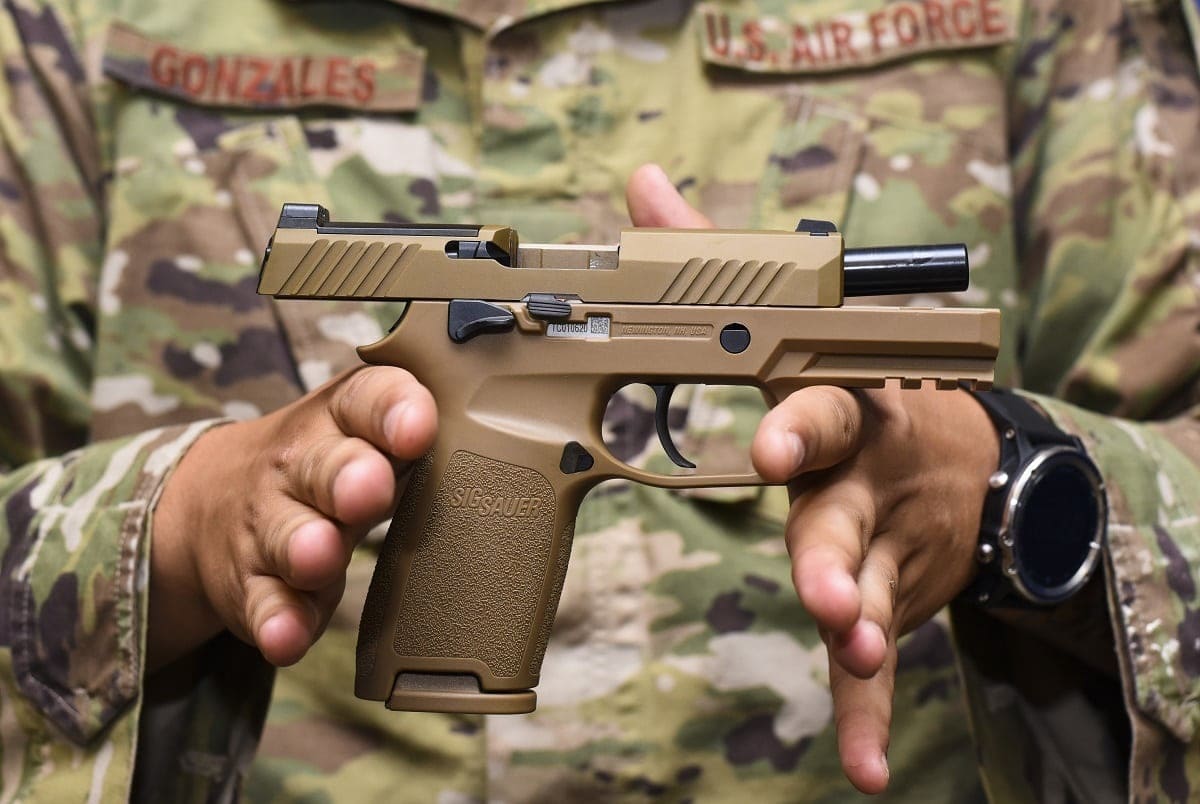 The Swiss-German company Sig Sauer has been in the arms business for a long time. Swiss SIG (Schweizerische Industrie Gesellschaft) a company founded in 1853, partnered with the German Sauer in 1976 to produce firearms. The joint company rode the European wave of handgun manufacturers in the late 1980s and 1990s with its series of handguns based on the original P210 platform.

Today Sig Sauer sells a full line of handguns and modern sporting rifles in the United States, and has penetrated both the military and law enforcement markets. Although the company failed to sell the P226 handgun to the U.S. Military in 1984—losing out to Beretta of Italy—in 2017 it succeeding in winning the contract for the Beretta’s replacement, the M17 Modular Handgun system. Here is a list of some of Sig Sauer’s best service pistols.

The Sig P210 is the original handgun that started the company’s entire line of P2XX pistols. The P210 is generally regarded as one of the best-designed pistols of the twentieth century. Adopted in 1949 by the Swiss Army, it replaced a Swiss copy of the Luger P08 pistol, the Model 29. The P210 is also considered one of the most accurate pistols ever built.

The P210 is built as one might expect a Swiss watch: “beautifully made” with carefully fitted parts. The design itself is based on the locked breech, short-recoil pistol operating system devised by John Moses Browning, and disassembles like a standard Colt-Browning type pistol. The P210 is chambered in 9mm and its only drawback was an eight-round magazine, which was remarkable then but about half the size of today’s magazines. The P210 was used by the Swiss Army, Danish Army and West German Border Guard.

The next pistol in the Sig line that rose to prominence was the M75, otherwise known as the Sig P220. The M75 was adopted by the Swiss Army in 1975, and was a logical evolution of the P210. The pistol internally was similar to the P210, with the incorporation of a manual decocker that lowered the hammer into a safety notch without pulling the trigger. It also featured a firing pin lock that prevented the gun from being fired even if dropped while cocked.

The P220 also different from the P210 in having a shorter barrel and larger trigger well. Still in production, the pistol is offered in 9mm, .45 ACP and 10mm Auto. The P220 found success in law enforcement organizations worldwide—including Sweden and the United States—and is the sidearm of the Japan Self Defense Forces.

The P226 was Sig’s breakout gun in the U.S. market and its most popular pistol. The P226 was actually developed for the U.S. Army’s competition to replace the World War II–era M1911A1 handgun with a modern design. Although it lost to Beretta, a series of dangerous accidents involving Berettas in Navy service caused the SEALs to switch to the P226 instead.

Armed with SEAL cachet and exploiting the explosion in high-capacity 9mm handguns caused by Glock, the P226 became a very popular handgun.

Internally, the Sig P226 is similar to its predecessors, having a double action/single action design: the first shot requires a long ten-pound trigger pull to cock and then fire the pistol, while subsequent shots have a lighter 4.4-pound pull. Unlike previous Sig P2XX guns, the P226 had a double-column magazine that widened the grip but allowed fifteen 9mm rounds—nearly twice as as previous Sigs—to be carried in a single magazine.

The Sig P226 is a large steel pistol that is not easy to carry concealed. As an alternative, Sig Sauer developed the P229. The P229 is a smaller, shorter pistol in the same size and weight range as the Glock 19 and the Smith & Wesson M&P Compact.

The P229 is a scaled-down P226, with a barrel .4 inches shorter than its predecessor. The pistol retains the 9mm, fifteen-round magazine and still has an all-metal firearm, resulting in a pistol that weighs thirty-four ounces loaded—five more ounces than the Glock 19. At 1.5 inches, it is also a third of an inch wider than the Glock 19. Nevertheless, for those used to the Sig’s manual of arms or the need for a decocker, the P229 is an excellent compact pistol.

In 2017, Sig Sauer beat Glock, Beretta, and other competitors for the U.S. Army’s M17 Modular Handgun System (MHS). The M17 is based on the Sig Sauer P320 and appears similar on its surface to other Sig pistols—but has several new internal updates from previous designs. The MHS consists of the full-sized M17 pistol and the compact M18, both of which are chambered for 9mm and distributed with seventeen- and twenty-one-round magazines.

Unlike previous Sig handguns, the P320 is a striker fired pistol that does away with a hammer and firing pin. The P320 also has a manual safety, a key Army requirement. The pistol is double action only, meaning a single trigger pull will both cock the pistol and release the firing pin, firing the gun. The P320 for civilians is available in 9mm, .357 SIG, .40 Smith & Wesson and .45 ACP.