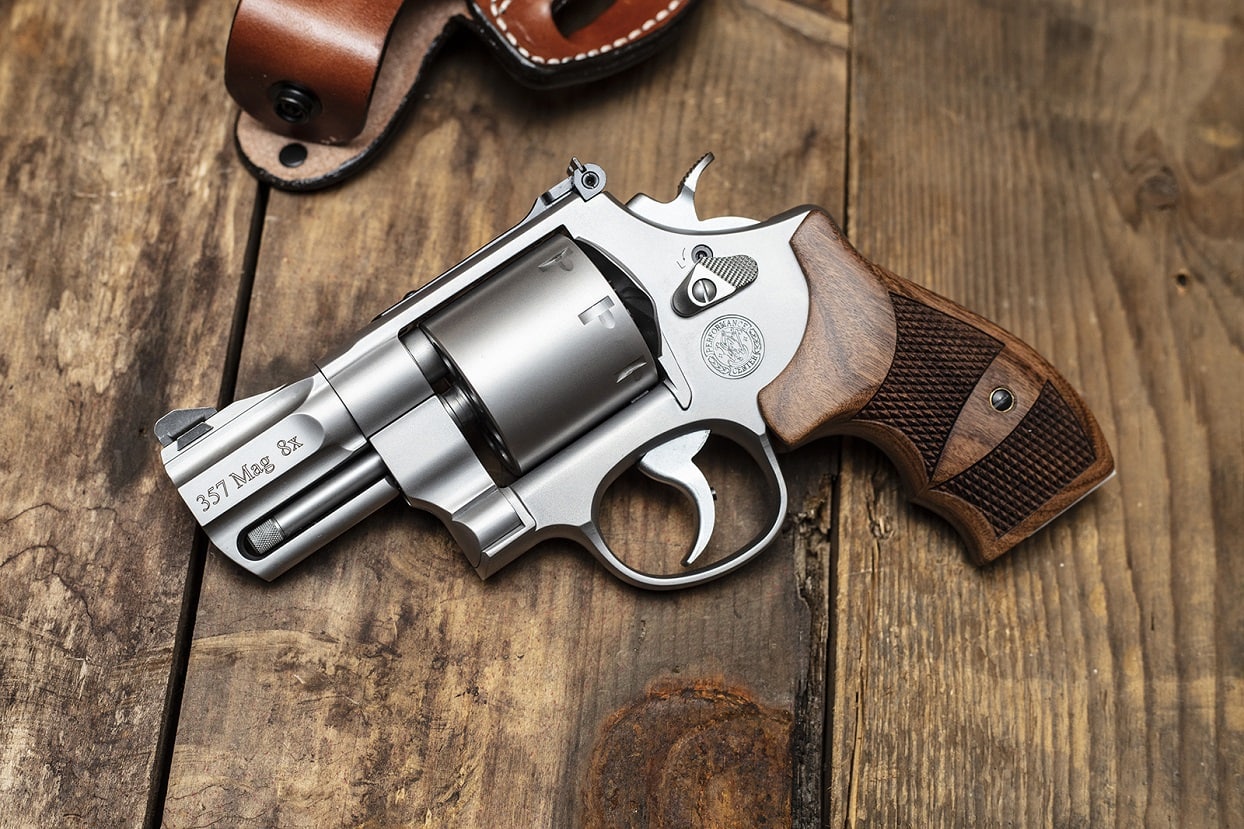 Smith & Wesson is one of the oldest, and most storied names in American firearms. Founded in the 1800s, the company specialized in revolvers and guns such as the No.3 and Schofield became synonymous with the Old West. Although Smith & Wesson is best known for its handguns, the company now makes guns of all stripes, from revolvers to pistols to their own version of the AR-15 rifle. Here are the 5 best Smith & Wesson guns on the planet today.

Smith & Wesson categorizes its revolvers using a system of letters, with the so-called “L” frames set in the middle between small and large caliber guns. One of the most popular “L frames” is the Smith & Wesson 686 .357 Magnum. The 686 is capable of shooting both high powered .357 Magnum and lighter .38 Special ammunition. This gives shooters the option of training on .38 Special until they know the ins and outs of the revolver and then stepping up to the more lethal .357 Magnum when they feel comfortable.

The 686 has a four-inch barrel, an overall length of 9.6 inches, and weighs two and a half pounds. It also adjustable sights, a satin stainless steel finish, double action firing system and a six or seven round cylinder.

The Smith & Wesson Model 29 was one of the first revolvers chambered for the powerful .44 Magnum round. A blued, six cylinder revolver with wooden grips and a classic style, the Model 29 became particularly popular after its use in the “Dirty Harry” series of films. The Model 29 is an all-steel handgun with heft, all the better to soak up the punishing level of recoil a user experiences when fired. Barrel length ranged from four to ten inches. The powerful .44 Magnum cartridge was particularly popular with gun enthusiasts and hunters who stalked dangerous prey. Discontinued in 1999, Model 29 was recently put back into production.

In Smith & Wesson’s lettering system the smallest revolvers use the so-called “J frame,” and one of the smallest revolvers of all is the Model 442 Pro Series. Designed as a concealed carry revolver, the 442 is chambered in .38 Special and can handle more powerful, higher pressure +P rounds. The revolver frame is made of aluminum alloy to reduce overall weight with the cylinder itself made of carbon steel and barrel made of stainless steel. The 442’s cylinder holds five rounds, resulting in a narrower pistol that is easier to carry concealed. The revolver is double action only, meaning a single pull with both advance the cylinder to fresh round and release the firing pin, firing the gun. The 442 lacks a hammer, allowing for a smoother draw from under clothing.

Smith & Wesson’s successful “wonder nine” pistol, the M&P followed in the footsteps of the Glock to produce a highly effective, high capacity polymer frame pistol. The Military & Police Model, currently in version 2.0, has a low bore axis, which the manufacturer claims reduces muzzle climb and allows the shooter to get sights back on target faster. The M&P 2.0 incorporates a five-inch stainless steel barrel into a pistol with an overall length of eight inches. The double action pistol is available in nine millimeter and .40 Smith & Wesson, with the 9mm version sporting a seventeen round magazine plus one in the chamber, for a total of eighteen rounds. The pistol also features an optional loaded chamber indicator and optional thumb safety. Somewhat unique among pistols it comes with four different palmswell grip inserts for maximum ergonomic comfort.

The patent on John Moses Browning’s 1911 handgun design ran out long ago, and nearly all gun companies now manufacture their own versions of this iconic handgun. Smith & Wesson is no exception, producing its own S&W1911 E-Series pistols. The pistols are generally true to the final version of the 1911A1, with the exception of stainless steel barrels, skeletonized hammers, and in some cases an accessory rail for the mounting of lights and lasers. The company makes both full-size Government and smaller Commander handguns, the latter with a barrel three quarters of an inch shorter than the five-inch Government barrel and a slightly shorter slide. Commanders also feature bobtailed mainspring housings and aggressive checkering to help the shooter stay on target. The 1911 E-Series is generally true enough to form to satisfy 1911 purists.