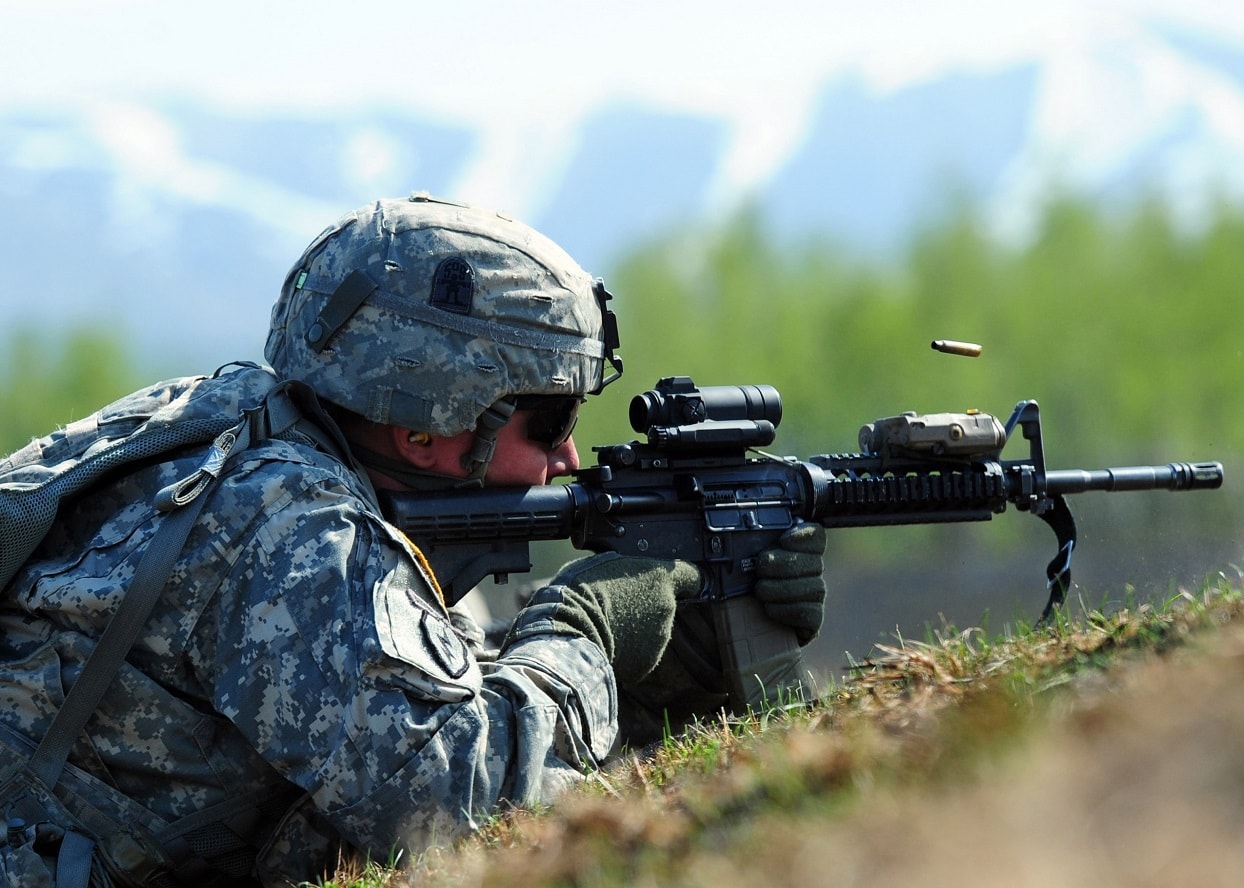 JOINT BASE ELMENDORF-RICHARDSON, Alaska -- Cpl. Johnny Hurst, assigned to A Company 3rd Battalion (Airborne) 509th Infantry Regiment, a native of Chicago, Ill., fires his M-4 carbine during a live-fire and movement-to-contact operation on the Infantry Squad Battle Course at Joint Base Elmendorf-Richardson, Friday, May 31, 2013. The Soldiers focused on core infantry skills such as fire team movement, communication, shifting fire, and once on the objective identifying and eliminating weapons caches and treating and evacuating casualties. (U.S. Air Force photo/Justin Connaher)

The U.S. Army is looking for a new weapon for infantry troops. After a half century of using the M16/M4 carbine series of weapons, the Army is looking for a weapon with increased range and lethality to deal with future threats. Although the search is still in its early stages, looking at the threats and the current state of small arms technology we can get an idea of what the service might shoot for–figuratively speaking–in a new soldier weapon.

The current U.S. Army weapon that the service eventually seeks to replace is the M4 carbine. An evolution of the original M16 introduced in the mid Sixties, the M4 is more compact and more reliable than its ancestor. Thanks to improved ammunition the M4 is able to penetrate lightweight body armor, and the use of optics allows soldiers to place rounds on target more accurately at longer ranges than ever before.

All of that having been said, the M4’s basic design precludes important upgrades. The use of a direct impingement operating system, although simple and effective, requires more frequent cleaning and alternatives exist. The 5.56-millimeter round, although lightweight and logistically appealing, is reaching a dead end performance-wise and a good argument exists that it needs replacing.

Now, let’s look at the threat and operating environment. Unlike many ground forces, the U.S. Army must be ready to fight literally anywhere and against anyone on the planet. Soldiers must be capable of engaging enemy troops at short ranges in cities while at the same time being capable of long range fire against enemies in open terrain. The weapon must be capable of controlled fully automatic fire in close quarters battle while at the same time having the energy to engage targets at long ranges. The cartridge the weapon fires must be capable of penetrating modern, advanced body armor while still tumbling shortly after entering the human body, creating lethal wound cavities.

Fulfilling all of these requirements, some of which are inherently contradictory is no easy task, and it’s easy to see why a conservative organization like the U.S. Army simply decided to upgrade the existing basic design over and over again. It’s difficult enough to meet this challenge, let alone demand a weapon with ten times the performance of the existing M4. Instead, we’ll envision a weapon that is a cost-effective improvement over the M4 with the capability to further grow down the road.

For our weapon, which we’ll call the M5, we’re going to switch to a familiar, but internally different platform: the Heckler and Koch 416 assault rifle. The HK 416 is externally nearly identical to the M4 carbine, aside from some cosmetic changes, but internally uses a gas-piston operating system that requires less frequent cleaning. The similarities between the two platforms will make transitioning to the new carbine for existing troops easier.

The modular system of the M5, which breaks down into upper and lower receivers, will allow the Army to make future changes—such as caliber changes or trigger group improvements–possible without buying a completely new weapon. This will make upgrades easier to implement in the future.

Another key change: switching to a new cartridge. The M5 will be chambered in 6.5-millimeter Grendel. The 6.5 Grendel round offers improved range and lethality over the existing 5.55-millimeter round without utilizing fundamentally different technology (such as cased telescope cartridges, polymer cases, or fully caseless ammunition). The M5 would use the same 14.5-inch long barrel as the existing M4 carbine, ensuring that the weapon is manageable in the enclosed spaces of a truck, Stryker armored vehicle, or M2 Bradley infantry fighting vehicle.

The Army would purchase the M5 stock without optics or aiming devices, an a la carte solution that recognizes a permanently attached optic–such as the optic on the German Army’s Heckler and Koch G36 assault rifle–is unlikely to be ideal under every circumstance. Instead, the M5 would feature M1913 Picatinny rails at the three, six, nine and twelve o’clock positions outside the barrel and along the top of the upper receiver. This would allow the Army to change the optic depending on the circumstance and make future upgrades easier.

One of the best things about our weapon design is that it’s actually the M4 carbine! The U.S. Army could have this new carbine by replacing the upper receiver on existing M4s with a HK 416 upper receiver chambered in 6.5-millimeter Grendel. This recycles at least half of the carbine, saving acquisition costs over buying an entirely new weapon. The M5 externally would look almost identical to the M4.

There are a few downsides to the new weapon. A 6.5-millimeter Grendel weapon would require new ammunition magazines and vast new stocks of 6.5-millimeter ammunition. Furthermore, the magazines would carry 24 rounds of ammunition, six rounds less than a 5.56-millimeter ammunition magazine. That’s an inherent tradeoff of having a slightly larger, more powerful round. The new round would also be a non-standard NATO round and incompatible with rifles and carbines fielded by our allies–most of whom show no intention of migrating away from the 5.56 cartridge.

In choosing a new carbine, the U.S. Army must navigate a maze of requirements, prioritizing them and likely leave some of them unfulfilled in order to field a rifle. It must also recognize that against the backdrop of more expensive modernization efforts, such as the effort to produce next generation helicopters and infantry fighting vehicles, procurement budgets in the 2020s and 2030s will be tight and there will be a temptation to “make do” with the M4. The new weapon must be as budget friendly as possible while still offering enough improved performance to justify the expense. The “M5” is such a weapon, offering improved lethality and range without breaking the bank.