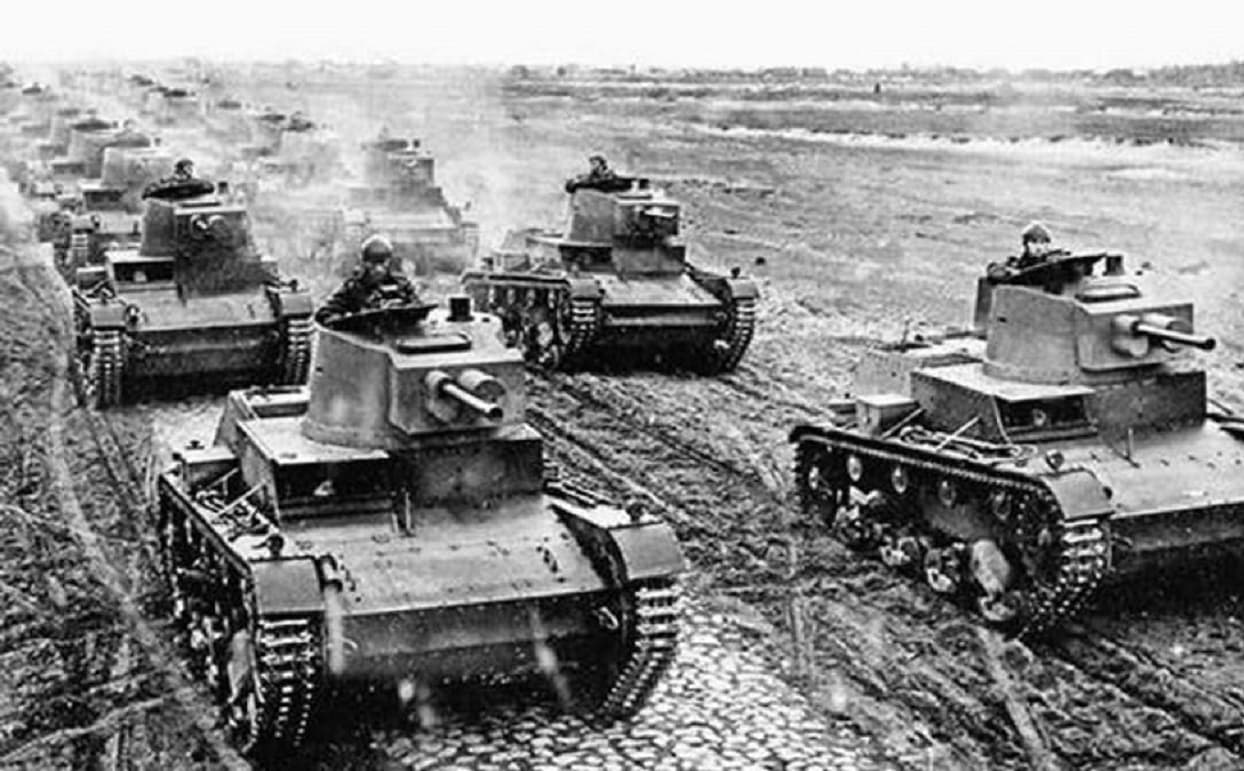 Blitzkrieg is usually thought of as a German invention in World War II. But had Imperial Germany not been defeated in November 1918, the first victims of mechanized warfare might have been the Germans themselves in World War I.

Plan 1919 would have amassed an astonishing 5,000 tanks for a sledgehammer assault to crush the German army on the Western Front. By comparison, the Germans mustered only 3,300 tanks for its enormous invasion of the Soviet Union in June 1941, and just 1,200 tanks at the Battle of the Bulge.

Plan 1919 was the brainchild of JFC Fuller, a brilliant British staff officer (and later Nazi sympathizer). Fuller proposed a concept that drew on the growing success of tank warfare in the final year of the First World War. Though the first “landships” had floundered during their debut at the Somme offensive of 1916, by 1918 the British army mastered combined arms warfare that integrated infantry, armor and artillery into a devastating package. It wasn’t quite the popular image of blitzkrieg—not with early tanks crawling along at 3 miles per hour—but it was sufficient to break the bloody deadlock caused by trenches, machine guns and barbed wire.

Yet had the First World War continued into 1919, Fuller envisioned something much, much more ambitious.

The forces he called for were staggering. In the initial phase of Plan 1919, a phalanx of 2,600 heavy tanks and 400 medium tanks, supported by concentrated airpower, would penetrate the German defenses along a 90-mile front. In other words, just the first wave of the offensive would comprise more tanks than the Germans employed to conquer France in 1940.

Next, 800 medium tanks would strike at German division, corps and army headquarters. Their mission would be to destroy or displace these HQs, disrupting command and control links and hampering movement of defensive reserves.

Once the German command system had been knocked out, then the pursuit force would be launched. A combined arms force of 1,200 medium tanks, backed by truck-mounted infantry and artillery as well as horse cavalry and airpower, would penetrate deep into the enemy rear.

Such a plan sounds more like Rommel and Patton than First World War commanders such as “Butcher Haig” or Erich von Falkenhayn, the German commander who fought the Battle of Verdun in 1916 to wear out the French Army in a battle of attrition that cost the French and Germans 500,000 casualties apiece.

But that was the whole point of Fuller’s plan. He sought an escape from the futile, exhausting attrition of the First World War, where the tactical stalemate of trench warfare doomed the combatants to a strategy of wearing the enemy down before their own side ran out of manpower and resources. Yet Fuller saw the key to victory didn’t rest on destroying the enemy so much as disorganizing the enemy. “Tactical success in war is generally gained by pitting an organized force against a disorganized one,” he wrote.

In turn, Fuller believed that the best way to disorganize the enemy’s field army was to destroy or disrupt his headquarters and command links, a tactic that modern armies strive for through cyberwarfare or radio jamming. However, even more visionary was Fuller’s insight that the invention of the tank offered strategic as well as tactical possibilities.

In the First World War, and often even today, tanks functioned as mobile pillboxes to crush barbed wire and machine gun nests, opening a gap in the enemy trenches to allow the foot infantry to advance a few miles. But Fuller realized that the firepower, armor and mobility of the tank offered the chance to use mechanized warfare to achieve a decisive, rather than merely a local, result.

Would Plan 1919 have worked? The British offensive at Amiens in March 1918, which used only 450 tanks, resulted in a German defeat that General Ludendorff called the “Black Day of the German Army.” What might 5,000 tanks have accomplished? Can you imagine how the German infantry would have felt at seeing 5,000 steel beasts emerging out of the dust and smoke? While Allied tanks had proven vulnerable to German field artillery firing directly at them, the Kaiser’s troops didn’t have bazookas or anti-tank mines, just a few 40-pound anti-tank rifles firing armor-piercing bullets.

On the other hand, given the mechanical unreliability of early armored vehicles, those 5,000 would probably have soon dwindled to 500 operational tanks while the other 4,500 waited for roadside assistance. Building 5,000 tanks would also have strained Allied manufacturing (unlike in World War II, America did not have a massive armaments capacity).

The logistics of supplying a huge mechanized force would also have been daunting. Without radio communications between tanks and their supporting infantry and artillery, mobile warfare would have been hard to coordinate. Interestingly, while Fuller’s plan involved armor, infantry and artillery, this didn’t mean that the three arms would fight together. Indeed, once the infantry initially helped the tanks penetrate the German defenses, then the footsloggers would become glorified security guards, protecting the tanks’ supply lines while the armor did its work. That sort of “King Tank” thinking proved disastrous in World War II North Africa, where unsupported British tanks impaled themselves on German troops who fought as combined arms teams.

Does Plan 1919 have relevance today? Smart bombs and cyberwarfare are the modern equivalents of Fuller’s tanks, a means to knock out an opponent’s ability to control his forces. And yet so often, from the “body counts” of Vietnam to Russian bombing raids on ISIS in Syria, strategy still seems focused on attrition. Rather than outmaneuvering the enemy, we hope to compel his surrender by simply killing him faster than he can replenish himself.

The great irony, of course, is that Plan 1919 did see the light of day. Except that it was the Germans who implemented it. Other nations, such as the French in 1940, decided that tanks were best used dispersed in small packets to support the infantry. It was Hitler’s panzer divisions that ruptured the French and Russian lines before plunging deep into the enemy’s rear.

And, in fact, it turns out that Heinz Guderian, the mastermind behind Hitler’s blitzkrieg, had read Fuller’s work after the war. The British Army might not have appreciated Fuller’s insight. Unfortunately, the German Army did.

Michael Peck is a defense journalist based in Europe.