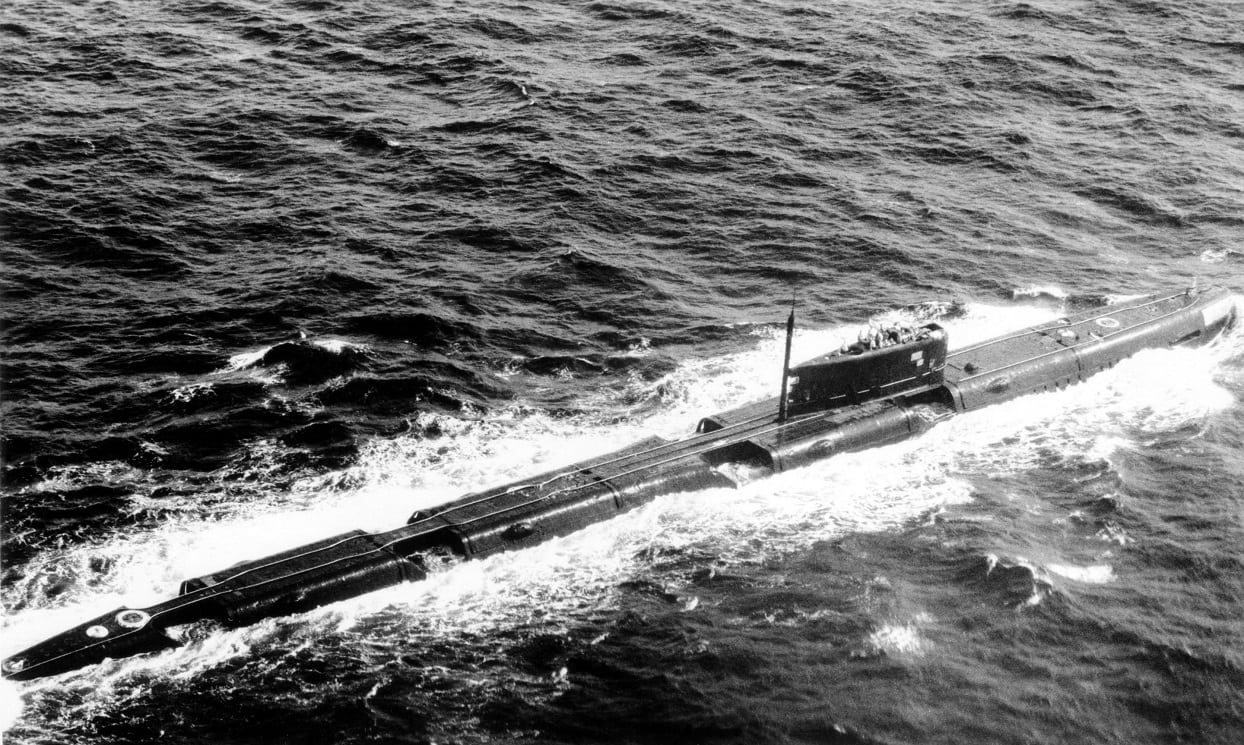 In 1985, a Soviet submarine undergoing a delicate refueling procedure experienced a freak accident that killed ten naval personnel. The fuel involved was not diesel, but nuclear, and the resulting environmental disaster contaminated the area with dangerous, lasting radiation. The incident, which remained secret until after the demise of the USSR itself, was one of many nuclear accidents the Soviet Navy experienced during the Cold War.

The Soviet Union’s nuclear war planners had a difficult time targeting the United States. While the United States virtually encircled the enormous socialist country with nuclear missiles in countries such as Turkey and Japan, the Western Hemisphere offered no refuge for Soviet deployments in-kind.

One solution was the early development of nuclear cruise missile submarines. These submarines, known as the Echo I and Echo II classes, were equipped with six and eight P-5 “Pyatyorka” nuclear land-attack cruise missiles, respectively. Nicknamed “Shaddock” by NATO, the P-5 was a subsonic missile with a range of 310 miles and 200- or 350-kiloton nuclear warhead. The P-5 had a circular error probable of 1.86 miles, meaning half of the missiles aimed at a target would land within that distance, while the other half would land farther away.

The missiles were stored in large horizontal silos along the deck of the submarine. In order to launch a P-5 missile, the submarine would surface, deploy and activate a tracking radar, then feed guidance information to the missile while it flew at high altitude. The system was imperfect—the command link was vulnerable to jamming, and the submarine needed to remain on the surface, helpless against patrol aircraft and ships, until the missile reached the target. Eventually, the P-5 missiles were withdrawn and the P-5 missile was replaced with the P-6, a similar weapon but one with its own radar seeker for attacking U.S. aircraft carriers.

The introduction of the P-6 gave the Echo II a new lease on life. By 1985, the submarine K-431 was already twenty years old but still technically useful. Like all Echo IIs, K-431 was powered by two pressurized water reactors that drove steam turbines to a total of sixty thousand shipboard horsepower. As old as it was, K-431’s nuclear fuel supply needed replenishing, and by early August the process had started at the Soviet Navy’s facilities at Chazhma Bay.

On August 10, the submarine was in the process of being refueled. Reportedly, the reactor lid—complete with new nuclear fuel rods—was lifted as part of the process. A beam was placed over the lid to prevent it from being lifted any higher, but incompetent handling apparently resulted in the rods being lifted too high into the air. (One account has a wave generated by a passing motor torpedo boat rocking the submarine in its berth, also raising the rods too high.) This resulted in the starboard reactor achieving critical mass, followed by a chain reaction and explosion.

The explosion blew out the reactor’s twelve-ton lid—and fuel rods—and ruptured the pressure hull. The reactor core was destroyed, and eight officers and two enlisted men standing nearby were killed instantly. A the blast threw debris was thrown into the air, and a plume of fallout 650 meters wide by 3.5 kilometers long traveled downwind on the Dunay Peninsula. More debris and the isotope Cobalt-60 was thrown overboard and onto the nearby docks.

According to Nuclear Risks, the accident scene was heavily contaminated with radioactivity. Gamma ray radiation was not particularly bad; at an exposure rate of five millisieverts per hour, it was the equivalent of getting a chest CT scan every hour. However, the explosion also released 259 petabecquerels of radioactive particles, including twenty-nine gigabecquerels of iodine-131, a known cause of cancer. This bode very badly for the emergency cleanup crews, especially firefighters who needed to get close to the explosion site, and the nearby village of Shkotovo-22. Forty-nine members of the cleanup crew displayed symptoms of radiation sickness, ten of them displaying acute symptoms.

One bright spot in the incident was that the it had involved the new fuel rods and not the old ones, and thus large amounts of particularly dangerous isotopes generated during nuclear plant operation, such as strontium-90 and cesium-137, were not present. While the Chazhma Bay region appears contaminated to this day with radiation, it is unknown how much of it is the result of the K-431 incident and how much the result of the many nuclear-powered submarines that were junked and forgotten in the area.

The K-431 incident was one of several involving Soviet submarine reactors. Ten Soviet submarines experienced nuclear accidents, and one other, K-11, also suffered a refueling criticality. The U.S. Navy’s nuclear submarine fleet, by contrast, suffered zero nuclear accidents—not only during the Cold War but all the way up to the present day. The accident rate is even more disturbing when one considers the loss of a submarine or crew to a nuclear accident could have inadvertently led to a military crisis between Washington and Moscow. As tensions between the two capitals begin to reach Cold War levels, accidents such as the K-431 incident are important reminders that events can and will happen that threaten to spiral dangerously out of control, and that cooler heads must always prevail.