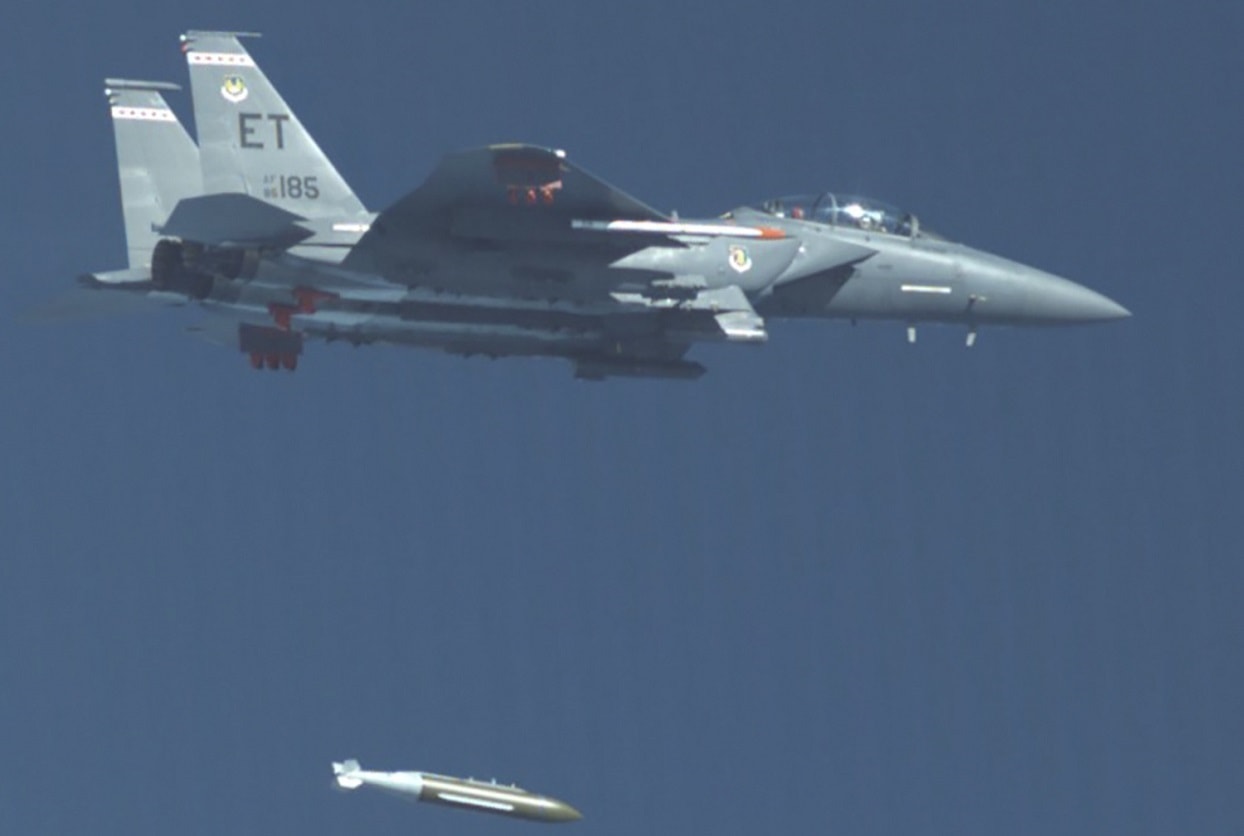 The 96th Test Wing recently concluded a GBU-72 test series that featured the first ever load, flight and release of the 5,000-pound weapon. (Courtesy photo).

The GBU-72 Advanced 5K Penetrator is a mish-mash of parts and uses a smaller bomb’s tail kit but doesn’t sacrifice performance. It may have been designed with Iranian or North Korean underground nuclear facilities in mind.

During a recent flight test at Eglin Air Force Base in Florida’s panhandle, an F-15E Strike Eagle released a new munition. The GBU-72 Advanced 5K Penetrator, designed to punch through deeply buried bunkers and other reinforced structures, fell to the ground from 35,000 feet, buried into the earth, and exploded.

“The 5,000-pound bomb’s release marked the end of a test series planned by the 780th Test Squadron and performed by the 40th Flight Test Squadron,” The Air Force release on the recent test stated, explaining the purpose of the live-fire flight test.

“That series included the first-ever weapons load, flight and release of the weapon July 23.  The squadron’s test goals were to show the weapon could safely release from the aircraft and validate a modified 2,000-pound joint-direct-attack-munition tail kit’s ability to control and navigate a 5,000-pound weapon.”

The flight tests consisted of three flights, three drops, and three ground tests, which saw the 5,000-pound bomb explode in a specially-built bomb arena that measures the blast strength, radius, and other data.

“The ground test series was Eglin’s largest-ever arena test, surpassing the previous titleholder by more than double. The arena test, an open-air test where the warhead detonates surrounded by blast pressure sensors and fragment counting equipment, helps to determine the weapon’s lethality.”

The Air Force developed the GBU-72 using simulation process and modeling techniques before actually building the weapon, a design approach that the Air Force has indicated would be helpful in the future.

The 5,000-pound weapon is logistically flexible and can deploy on large conventional strategic bombers like the Air Force’s B-52, stealthy platforms like the B-2 Spirit (and likely the Spirit’s future successor, the B-21 Raider), or much smaller fighter jets like the F-15 used in the most recent test.

A GBU-72 Program Manager that the new bunker-buster is expected to be much more lethal than older munitions like the GBU-28, also a 5,000-pound hard target penetrator developed to fill a capabilities gap in the lead-up to Desert Storm in just two weeks.

One potential application for the GBU-72 would be against underground command and control facilities — or nuclear sites. Given the bomb’s penetration capabilities, North Korean and Iranian nuclear facilities could be a scenario in which GBU-72 might excel.

Caleb Larson is a multimedia journalist and Defense Writer. He lives in Berlin and covers the intersection of conflict, security, and technology, focusing on American foreign policy, European security, and German society