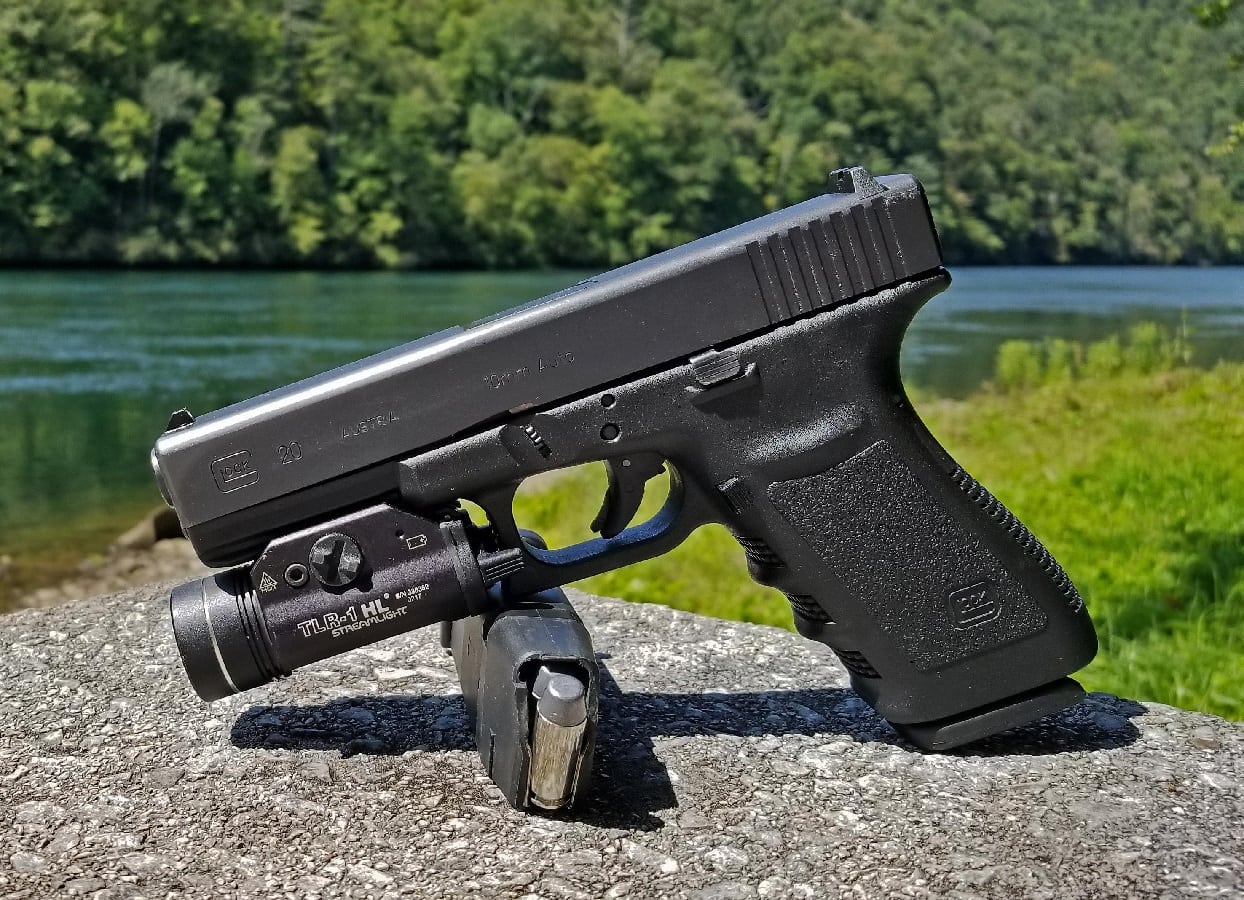 Designed around the 10mm Auto cartridge, the Glock 20 is a formidable combination of powerful handgun cartridge and high capacity autoloader. The result is a handgun more powerful than the legendary 1911 pistol with more than twice the magazine capacity.

The Glock handgun was originally designed by Gaston Glock, a maker of bayonets for the Austrian Army. After considerable testing of existing guns and his own research and development, the amateur gun designer produced the Glock 17, a nine-millimeter handgun with a seventeen round magazine capacity. Glock married a polymer frame with a steel slide, resulting in a lightweight firearm, while the use of a staggered magazine column effectively doubled the handgun’s capacity. Reliable, lightweight and with a prodigious magazine, the Glock 17 captured the Austrian Army contract in 1981. In the mid-1980s it became commercially in the United States, where it quickly became a bestseller.

One criticism of the Glock 17 was its caliber. The nine-millimeter round, introduced in 1902, was a common European military and police round known for its modest recoil. As such, it was an effective caliber for use by conscripts and police that infrequently used their guns. The nine millimeter round partially compensated for its lack of power by being relatively narrow, allowing semi-automatic pistols chambered for the caliber to carry more rounds than comparable calibers. That having been said, the larger capacity magazine was not an acceptable solution for everyone, and many shooters still craved a harder-hitting round.

Glock’s takeover of the U.S. gun market was complicated somewhat by the 1986 Miami shootout, which saw FBI agents equipped with .38 Special, nine-millimeter, and .357 magnum handguns inflict a total of eighteen hits on two criminals before finally incapacitating both of them. The FBI, which suffered two agents killed and five wounded in the gun battle, immediately sought to replace the three rounds with a new round that could put criminals down more quickly, saving the lives of law enforcement.

The FBI initially switched to the 10mm Auto cartridge, explaining that between nine-millimeter, .45 ACP (11.43×23) and 10mm Auto, the latter offered the greatest penetration into soft tissue, resulting in incapacitation of the target. Moreover, the 10mm Auto generated from 400-750pounds of energy and traveled at supersonic speeds, unlike the .45 ACP round that was stuck in between 400 to 500-foot pounds of energy and traveled at subsonic speeds.

The Bureau’s use of 10mm Auto was short-lived because although the round offered superior ballistics, it featured an undesirable amount of recoil. The FBI quickly moved on to the smaller .40 S&W caliber while 10mm Auto underwent further experimentation in the firearms community. .40 S&W is now losing ground to improvements in the nine-millimeter round. Ironically, just as the .40 S&W caliber is losing popularity, the 10mm Auto round is more popular than ever.

Glock, an astute observer of firearm trends, introduced the 10mm Auto Glock 20 in 1991. Glock introduced its 10mm handgun it at the height of the caliber’s popularity with the FBI, continued manufacturing it through the caliber’s decline, and now is poised to take advantage of 10mm’s resurgence. The Glock 20 handgun has an overall length of 8.07 inches, compared to 8.04 inches for the original Glock 17. The Glock 20 has a height of 5.51 inches, again just a tad over the Glock 17, and a barrel length of 4.61 inches.

A great advantage of the Glock 20 is that it combines the 10mm Auto caliber, with its wide variety of ammunition loads, with a high capacity magazine. The Glock 20 can fit 15 rounds into a standard magazine, compared to 17 rounds for the Glock 17 and 13 rounds for the .45 ACP-chambered Glock 21. Conventional 10mm Auto ammunition ranges from 424 foot pounds (about the same as .45 ACP) to 774 foot pounds, meaning that the Glock 20 can emulate the performance of a 1911 handgun with more than twice the ammunition capacity or could accept even harder-hitting rounds.

The Glock 20 may not be the most popular of Glock’s handguns, but it is certainly the most powerful. The gun’s combination of power and magazine capacity makes for an intimidating weapon, and the ability to tune the gun to manage power and recoil through different ammunition is a major advantage over other big bore handguns, especially those chambered in .45 ACP. Nearly three decades old, the Glock 20 is a proven design to handle a powerful round.