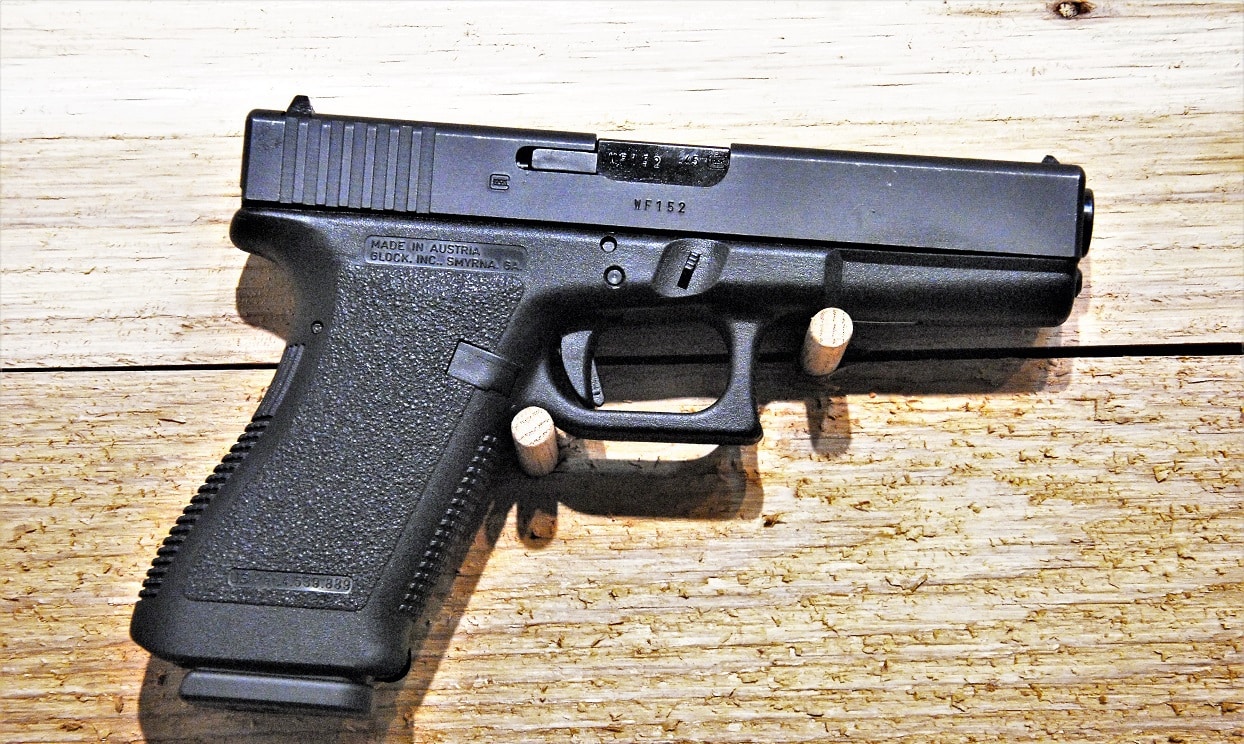 In 1990, the world of the .45 ACP cartridge was turned upside down. For more than seventy years the domain of the Colt 1911, a new Austrian handgun, dared to use the venerable old bullet in a modern design that included, of all things, a polymer frame. Glock’s adoption of the .45 ACP in the new Glock 21 likely saved the cartridge—and all of its users—from obscurity, and made the big bore cartridge a mandatory offering for a new generation of handguns.

Invented in 1911 by prolific firearms inventor John Moses Browning, the Colt 1911 pistol used the .45 ACP cartridge—also invented by Browning. Together the pistol and cartridge were meant to address a lack of handgun stopping power in the U.S. Army first noticed during the Philippine Insurrection, when existing Army .38 Long Colt handguns proved unable to stop Moro insurgents in their tracks. The U.S. Army adopted as the M1911, and later the M1911A1, Browning’s pistol served until the early 1980s.

The .45 ACP cartridge proved considerably more effective than the .38 Long Colt used by the Army during the Insurrection, with more than twice the energy in foot pounds at the muzzle. The .45 ACP/1911 combination gathered considerable cachet over the years, and despite being dropped by the Army in the 1980s the 1911 platform still has a loyal following thirty years later.

The rise of the nine millimeter handguns, precipitated in large part by the Glock 17, hung a question mark over the .45 ACP. With police agencies, gendarmes and armies all switching to the nine millimeter, the cartridge seemed to lack an anchor in government service. American gun users, whose previously had to choose between the .45 ACP, .357 Magnum and .38 Special, all flocked to the novel new pistol with the high-magazine capacity. The .45 ACP could have floated toward nichedom. Then in 1990 Glock introduced the Glock 21: the .45 ACP Glock.

After the release of the original Glock 17, Glock apparently decided the design was mature enough to handle larger calibers. In 1990, the company released the Glock 20 (ten millimeter), Glock 21, (.45 ACP), and Glock 22 (.40 Smith & Wesson). The Glock 21 was released with an eye towards military and law-enforcement service, gun enthusiasts, home defense, and even hunting.

Selling the Glock 21 to existing Glock owners was a relatively easy task. The Glock 21 was simply a scaled up Glock 17. Reaching exist .45 ACP owners, on the other hand, was going to be a much more difficult task. 1911 owners are much more likely to like their handgun for the historical importance, tradition, and reliability of a good 1911. To own a .45, even more modern designs, is to own a slice of history and a weapon backed up by decades of service.

It’s in carrying capacity that the Glock 21 shines over other designs. The Glock 21 carries ten rounds of .45 ACP in a flush internal magazine, and yet still weighs just 38.48 ounces loaded. The 1911, by contrast, weighs 42 ounces with a flush internal magazine of seven rounds. (Ten round magazines exist for the 1911 but stick out prominently beyond the magwell.) Glock’s early adoption of high capacity double stack magazines helped ameliorate the .45 ACP’s girth problem. While the Glock 21 doesn’t have the 1911A1’s famously slender grips, grip width is not uncomfortable for those with smaller hands.

Although the polymer and steel Glock 21 weighs less than the all-steel 1911A1, recoil shooting both of the guns is remarkably similar. This is likely a function of the cartridge itself. Recoil is not unpleasant, less of a kick and more of a strong rearward push or shove.

In 2007 Glock released a new version of the Glock 21, the Glock 21 SF. Designed to compete for a Department of Defense contract, the Glock 21 SF (Short Frame) had a smaller backstrap to more readily accommodate smaller hands and ambidextrous magazine release. Despite this the Glock 21 has failed to make inroads with the U.S. military and law enforcement, likely due to misgivings about recoil and a smaller magazine size.

Although .45 ACP purists–and .45 ACP/1911 purists in particular—may have strong reservations about polymer pistols in general and the Glock 21 in particular, the pistol has won over many converts. The Glock 21 is an extremely reliable handgun and an absolute requirement for most gun enthusiasts. The success of the Glock 21 has meant that other manufacturers, including Smith & Wesson, Sig Sauer, Heckler & Koch, and Springfield Armory have all introduced .45 ACP versions of their high capacity nine-millimeter pistols. All of this has increased the visibility and popularity of the .45 ACP round and might even lead fans of newer pistols back to the 1911.

The Glock 21 is a bridge between new and old, mating a powerful old favorite round with modern handgun technology. The gun not only succeeded in the civilian market but helped a whole new generation of gun owners get into .45 ACP handguns. While some enthusiasts may never warm to the lightweight polymer frame, there is no doubt the pistol helped maintain interest in the .45 ACP cartridge, injecting new life into the old cartridge.