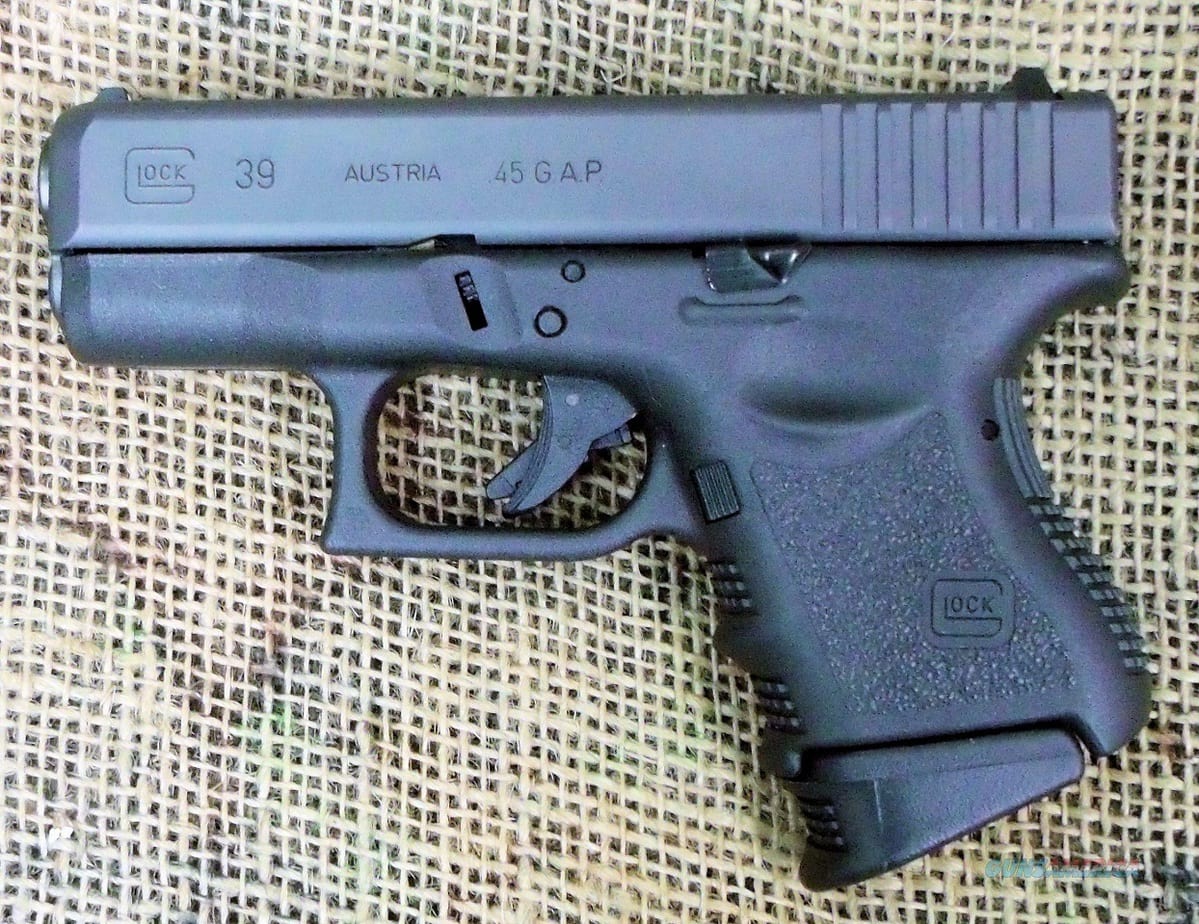 The story of the Glock 39: In the early twenty-first century, industry cooperation between the CCI/Speer ammunition company and Glock lead to the creation of a new caliber, .45 GAP. GAP stood for Glock Automatic Pistol and was meant as an alternative to the nearly century-old .45 ACP. Although things didn’t exactly work out that way, the .45 GAP is still a viable cartridge for shooters who want power with less recoil.

The .45 GAP round was released in November 2002 by CCI/Speer. The round was developed by Ernest Dunham in response to a request by Glock for a round that had the same overall length as the 9-millimeter Luger while packing the raw power of .45 ACP. 9mm Luger, also known as 9×19, has an overall length of 29 millimeters, to the .45 ACP’s 32 millimeters.

Although Glock was already branching into new calibers, including .40 Smith & Wesson, such a new round would allow compact and subcompact pistols to carry a high firepower round while keeping overall length—particularly grip length—down. Grip comfort is a key consideration in choosing a firearm, and too wide a grip can send shooters looking for something else.

The Glock 39 is one of the company’s smallest pistols on the market. The has an overall length of just 6.5 inches, a height of 4.17 inches, and a slide width of just 1.12 inches. The barrel is 3.43 inches long and the entire pistol, with empty magazine, weighs just 1 pound 8 ounces.

The Glock 39 is designed as a backup, concealed carry, or “last ditch” pistol, unobtrusive and easy to keep out of the way but ready to go when you need it. As short as it is it still carries six rounds of .45 GAP ammunition, plus a single round in the chamber, thanks to the single stack magazine. The standard six round magazine can also be replaced with eight and ten round magazines, though the larger magazines will protrude conspicuously from the magazine well and make them difficult to conceal.

In other words, the .45 GAP does indeed live up to claims of greater performance in a smaller cartridge, exceeding .45 ACP by a comfortable margin. In an ideal world, the .45 GAP should supplement and eventually replace .45 ACP. Although the .45 ACP cartridge’s recoil is often overblown and usually quite manageable, the new cartridge is a vast improvement. That having been said, .45 ACP has had more than a century to build up a loyal, die-hard following, and its support is deeply entrenched along .45 shooters, particularly those loyal to the John Browning’s 1911 platform and its descendants.

How does the new round fare in a subcompact pistol frame? Noted pistol and self-defense authority Massad Ayoob states that the testers felt the Glock 39 was easier to control than the subcompact .40 S&W Glock 27. In fact, Ayoob notes, “only the Glock 26 in the mild 9mm Luger chambering was perceived to have less recoil than the subcompact Glock in .45 GAP.”

The Glock 39 pistol is a good choice for those that want a small, accurate, hard-hitting pistol whose recoil is only second to the Glock 26. Although the .45 GAP round hasn’t quite taken off as some anticipated, the well-engineered round’s performance cannot be ignored and could indeed eventually gain popularity. The Glock 39 is an excellent choice for those that place a premium on knockdown power and performance over magazine capacity.