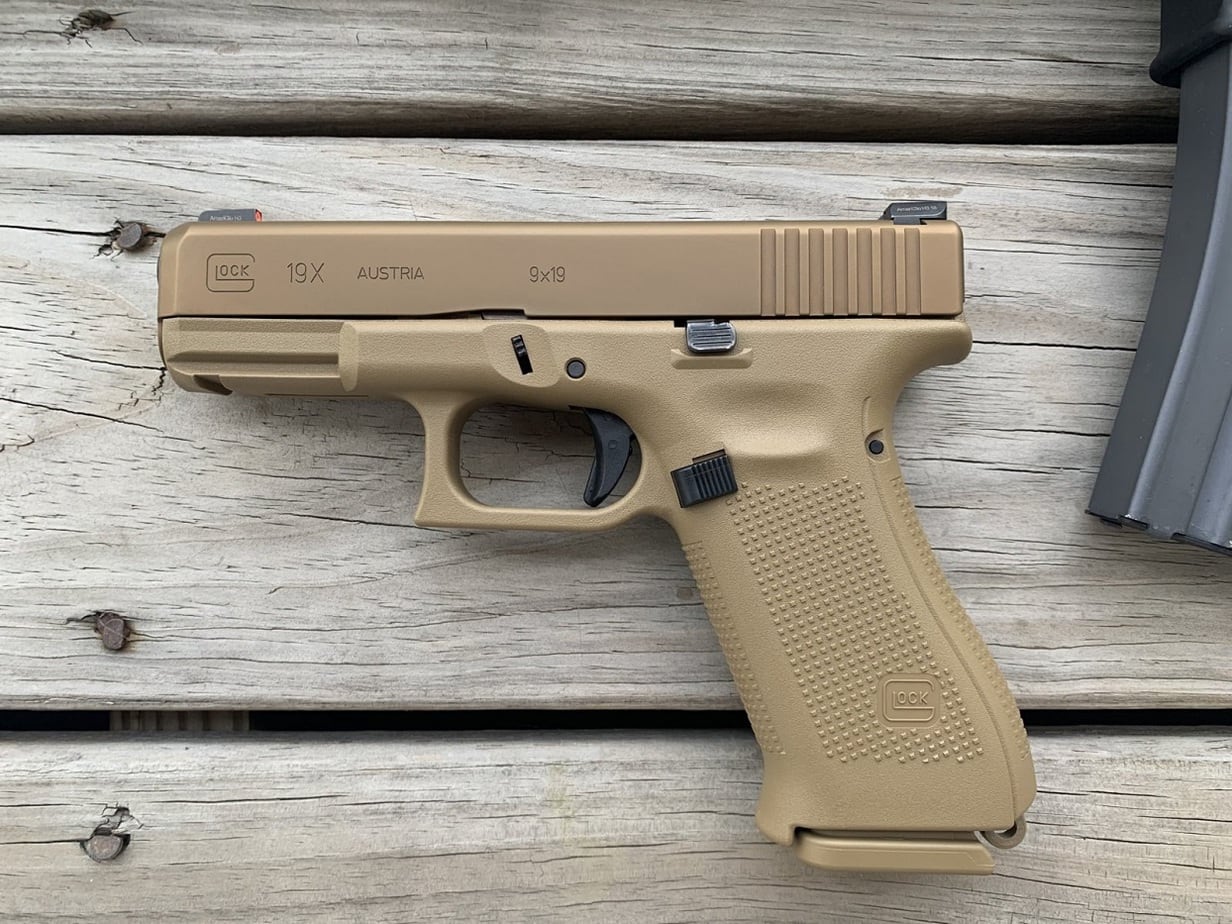 The Glock 17 handgun shook up the gun industry in a big way. Gaston Glock’s polymer pistol masterpiece, with its emphasis on ruggedness and reliability, swept the military and law-enforcement world and conquered the civilian market. Slowly, the company has introduced new handguns, all based on the original design, to compete in virtually every niche of the handgun market, from large-bore semiautomatics to discreet concealed carry. Here are 5 best Glocks shooters love for many reasons.

The handgun that started it all, Gaston Glock’s first handgun was originally designed to win a contract to supply the Austrian Army with handguns. It is a remarkable piece of engineering for someone who had only studied, but never designed, handguns of his own. The polymer lower receiver reduced the handgun’s weight where metal was unnecessary while keeping a traditional all-steel frame. The G17 can stand up to a wide array of physical abuse, including being run over by a car and frozen in ice, as well as dust and other environmental factors while remaining completely reliable. The Glock’s seventeen-round magazine had the highest ammunition capacity of any commercially available pistol of its time.

One of the first Glock variants, the Glock 21, was simply the original Glock 17 scaled up to accept the .45 ACP round. The result was a high-capacity .45 pistol, something that wasn’t exactly common. The Glock 21 could carry thirteen .45 ACP rounds while the standard .45 pistol, the Colt 1911A1, could carry seven or eight. The use of weight-reducing polymers was particularly useful in the G21, as it offset the weight of a magazine full of .45 rounds. The introduction of the Glock 21 early in the company’s line proved that Glock understood many American shooters were skeptical of what they considered the relatively low-powered nine-millimeter round, and that the basic design could scale up to accommodate more powerful, higher recoil ammunition.

The Glock 17 was a very popular handgun but, designed for military service, it was a bit larger than what many enthusiasts, concealed-carry wearers and home-defense users wanted. The result was the Glock 19. The Glock 19 was designed as a compact version of the Glock 17, approximately half an inch shorter than the G17 in overall length, height and barrel length. Ammunition capacity was decreased only slightly, to a still-respectable fifteen rounds. The G19, while not designed as a service pistol, has attracted a military following, with Navy SEALs and U.S. Army Rangers choosing it as their standard sidearm. A modified Glock 19, the 19X, was submitted to the U.S. Army’s Modular Handgun System competition, although was ultimately not selected.

Designed as a subcompact carry pistol, the G43 is Glock’s first “single stack” handgun, featuring a thin magazine carrying six nine-millimeter rounds in a single vertical column. The G43 is one of the smallest pistols in the subcompact category, just 6.26 inches long and four and a quarter inches high. The pistol is just one inch thick, and loaded weighs just 22.36 ounces. This combination of small size and light weight makes the Glock 43 exceptionally easy to conceal on one’s person. While the relatively small ammunition capacity is a bit unusual for a Glock, concealed carry pistols in general are strictly defensive firearms and the low round count is a tradeoff.

In Glock’s entire inventory of handguns, there is one gun not available for sale in the United States to regular gun owners. This particular gun, the Glock 18, has a selector switch located on the slide that allows for two modes: traditional semiautomatic fire and fully automatic fire. The Glock 18 is a Glock 17 full-size pistol with the ability to fire at rates of up to 1,200 rounds per minute. In addition to seventeen-round magazines, Glock also manufactures thirty-three-round magazines that fit in the magazine well of most nine-millimeter Glocks, and would be particularly useful in the G18. Saddam Hussein had a Glock 18C, a version with a built-in compensator to deal with the recoil of fully automatic fire, on him when he was captured by U.S. forces in December 2003. The gun was later presented to former president George W. Bush as a war trophy.

Kyle Mizokami is a defense and national-security writer based in San Francisco who has appeared in the Diplomat, Foreign Policy, War is Boring and the Daily Beast. In 2009, he cofounded the defense and security blog Japan Security Watch. You can follow him on Twitter: @KyleMizokami.