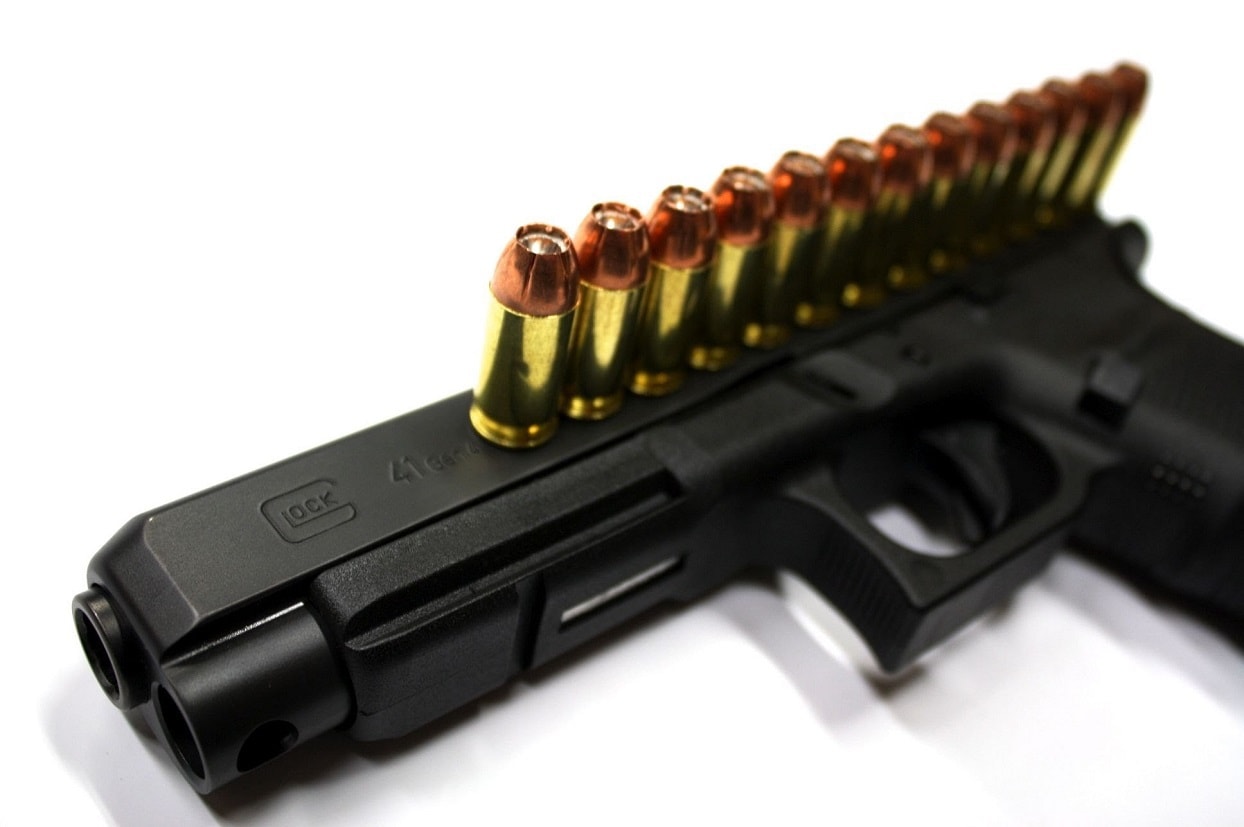 Today, advances in bullet technology means a 9mm round can deliver as much energy as the .45 ACP. Despite this, the .45 ACP is far from dead, as it has also benefited from increased performance. Today there are more choices of .45 ACP pistols than ever before, as almost all gun manufacturers offer their most modern semi automatic handguns in the big caliber. Here are the 5 best .45 ACP guns today.

Wilson Combat was started in 1977 by founder Bill Wilson, a watchmaker by training. For those that know the platform, that’s an appropriate background for a company building custom 1911 handguns. The 1911’s early twentieth-century pedigree involves the precise fitment of many small interlocking parts to produce a reliable, accurate pistol.

The Tactical Carry pistol is one of the very best of a crowded field of 1911 pistols and represents the pinnacle of the design. Like all full-size “Government” model 1911s, the Tactical Carry has an overall length of 8.7 inches, a five-inch barrel, and weighs 45.2 ounces fully loaded. It also has classic 1911 attributes such as a checkered front strap, beavertail safety and a reduced profile grip safety. The Tactical Carry also has a 3.5 to 4.5 pound trigger pull, fiber optic sights for shooting in low light conditions and a one-inch accuracy guarantee at ranges of twenty-five yards.

One of the few 1911 variants that garnered acceptance from the user community is the “Commander” type pistol. Named after the Colt Commander, a handgun designed for wear by officers, Commanders feature a shorter, 4.25 inch barrel, a reduction of three quarters of an inch over a standard, full size (also known as Government) model. The Commander variant became popular with with those that wanted a 1911 pistol that was lighter and easier to carry concealed.

The Executive Carry is an excellent example of the Commander type. Like all 1911s it features a single stack .45 ACP magazine of up to eight rounds, the same as a Government model. The pistol features a bobtail frame and smoothed edges to reduce the changes of the pistol catching on clothing. The Executive Carry also features a matte stainless steel finish and fiber optic sights.

The Glock 21 is about as far from the 1911 as one can get in the field of handguns. An Austrian pistol with a polymer frame and modern internal design, the Glock 21 is simply a scaled up version of the original Glock 17 handgun introduced in 1982. Glocks were—and still are—derided as “Tupperware guns” wherein the use of plastics was in some way a fatal design flaw.

In reality, the Glock 21 is actually one of the best, and most affordable, .45 ACP pistols on the market. The Glock 21 carries thirteen rounds in a double stack magazine that is wider than the 1911—but is not uncomfortable to hold. The use of a polymer frame means that despite carrying up to five more rounds than a typical 1911, the Glock 21 fully loaded weighs nearly half a pound less. The Glock is easier to disassemble and clean than the 1911.

The HK45’s development can be traced to the original Heckler & Koch USP pistol. Developed in the 1990s as an entry in Special Operations Command’s Offensive Handgun Weapon System Program, the USP was adopted by U.S. commandos as the Mark 23 pistol. The HK45 is an evolutionary step forward from the USP, chambered in .45 ACP.

The HK45 is 8.03 inches long, has a barrel length of 4.46 inches, and weighs just under two pounds with an unloaded magazine. The pistol features a cold hammer forged, polygonal bore barrel for longevity and accuracy, fully ambidextrous controls, and Picatinny rail for the attachment of aiming lights and lasers. It has a single action/double action operating system and a decocking lever. A major innovation built into the HK45 is a spring operated recoil reduction system, which Heckler & Koch claims reduces recoil by up to 30 percent.

Originally designed and imported from Croatia as the HS Produkt HS2000, the Springfield XD45 is available in 9mm, .40 Smith & Wesson and .45 ACP calibers. The XD is a striker fired, double-action only handgun with a polymer frame and metal slide. It has an overall length of 7.3 inches with a four inch, hammer forged steel barrel. Like the 1911 series pistols it has a grip safety to prevent accidental discharge.

The XD45’s double stack, two-row magazine holds thirteen rounds. At just 1.2 inches, the grip is extremely slender for a double stack handgun and features aggressive texturing. Takedown is a simple matter of clearing the handgun, removing the magazine, flipping a side lever, and sliding the slide to the rear. The XD has a reputation for reliability and durability, and is one of the most affordable option on this list.