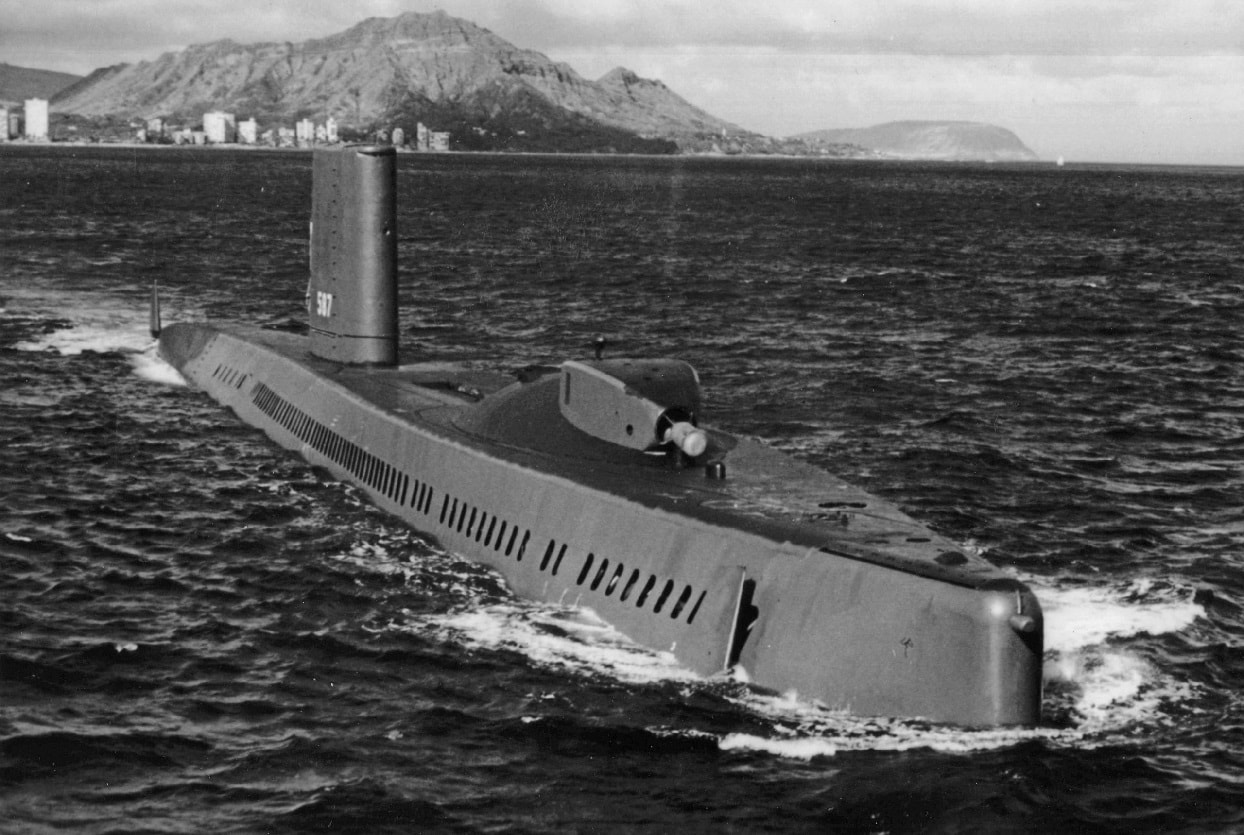 Halibut (SSGN-587) with Diamond Head in the background in late 1965. Note her topside thruster and she has no DSVR (Deep-Submergence Rescue Vehicle) habitat which was later fitted to the topside at the rear of the boat.

Like the halibut flatfish, USS Halibut was an unusual-looking submarine, and also spent a considerable amount of time on the ocean floor. Halibut was a “spy sub,” and conducted some of the most classified missions of the entire Cold War.

USS Halibut was built as one of the first of the U.S. Navy’s long-range missile ships. The submarine was the first built from the ground up to carry the Regulus II missile, a large, turbojet-powered cruise missile. The missile was designed to be launched from the deck of a submarine, with a ramp leading down into the bow of the ship, where a total of five missiles were stored. This resulted in an unusual appearance, likened to a “snake digesting a big meal.” Halibut also had six 533-millimeter torpedo tubes, but as a missile sub, would only use torpedoes in self-defense.

Halibut was a one-of-a-kind submarine. At 350 feet long, with a beam of twenty-nine feet, she was dimensionally identical to the Sailfish-class radar picket submarines, but her missile storage spaces and launch equipment ballooned her submerged displacement to five thousand tons. Her S3W reactor gave her an underwater speed of more than twenty knots and unlimited range—a useful trait, considering the Regulus II had a range of only one thousand miles.

Regulus II was quickly superseded by the Polaris submarine-launched ballistic missile, whose solid rocket fueled engine made for a more compact missile with a much longer range. The combination of the Polaris and the new George Washington–class fleet ballistic missile submarines conspired to put Halibut out of a job—Regulus II was canceled just seventeen days before the sub’s commissioning.

Halibut operated for four years as a Regulus submarine. In 1965 the Navy, recognizing that a submarine with a large, built-in internal bay could be useful, put Halibut into dry dock at Pearl Harbor for a major $70 million ($205 million in today’s dollars) overhaul. She received a photographic darkroom, hatches for divers to enter and exit the sub while submerged, and thrusters to help her maintain a stationary position.

Perhaps most importantly, Halibut was rebuilt with spaces to operate two remotely operated vehicles nicknamed “Fish.” Twelve feet long and equipped with cameras, strobe lights and sonar, the “fish” could search for objects at depths of up to twenty-five thousand feet. The ROVs could be launched and retrieved from the former missile storage bay, now nicknamed “the Bat Cave.” A twenty-four-bit mainframe computer, highly sophisticated for the time, analyzed sensor data from the Fish.

Post overhaul, Halibut was redesignated from nuclear guided-missile submarine to nuclear attack submarine, and assigned to the Deep Submergence Group, a group tasked with deep-sea search-and-recovery missions. In mid-July 1968, Halibut was sent on Velvet Fist, a top-secret mission meant to locate the wreck of the Soviet submarine K-129. K-129 was a Golf II–class ballistic missile submarine that had sunk that March, an estimated 1,600 nautical miles off the coast of Hawaii.

K-129 had sunk along with its three R-21 intermediate-range ballistic missiles. The R-21 was a single-stage missile with a range of 890 nautical miles and an eight-hundred-kiloton nuclear warhead. The loss of the submarine presented the U.S. government with the unique opportunity to recover the missiles and their warheads for study.

Halibut was the perfect ship for the task. Once on station, it deployed the Fish ROVs and began an acoustic search of the ocean floor. After a painstaking search and more than twenty thousand photos, Halibut’s crew discovered the ill-fated Soviet sub’s wreckage. As a result Halibut and her crew were awarded a Presidential Unit Citation, for “several missions of significant scientific value to the Government of the United States.” Halibut’s contribution to efforts to recover K-129 would remain secret for decades.

In 1970, Halibut was again modified to accommodate the Navy’s deep water saturation divers. The following year, it went to sea again to participate in Ivy Bells, a secret operation to install taps on the underwater communications cables connecting the Soviet ballistic missile submarine base at Petropavlovsk on the Kamchatka Peninsula with Moscow’s Pacific Fleet headquarters at Vladivostok.

The taps, installed by divers and their ROVs, allowed Washington to listen in on message traffic to Soviet nuclear forces. Conducted at the bottom of the frigid Sea of Okhotsk, the Ivy Bells missions were conducted at the highest level of secrecy, as the Soviets would have quickly abandoned the use of underwater cables had they known they were compromised.

Halibut was decommissioned on November 1, 1975, after 1,232 dives and more than sixteen years of service. The ship had earned two Presidential Unit citations (the second in 1972 for Ivy Bells missions) and a Navy Unit Citation. The role of submarines in espionage, however, continued: she was succeeded in the role of special missions submarine by USS Parche. Today, USS Jimmy Carter—a sub with a particularly low profile—is believed to have taken on the task. The role of submarines in intelligence gathering continues.